Pancreatic cancer is a malignant tumor of the digestive tract with a high degree of malignancy, which is difficult to diagnose and treat. In recent years, the incidence and mortality of pancreatic cancer have increased significantly.

The early diagnosis rate of pancreatic cancer is not high, and it is often found in the late stage.

At this time, the cancer cells have spread and are difficult to treat. The 5-year survival rate is less than 7%, which is the best prognosis.

Immune checkpoint inhibitors have shown excellent results in many cancers and have even changed the cancer treatment landscape, but this approach has not helped pancreatic cancer patients. One reason is that pancreatic cancer is a so-called “cold tumor” that the immune system cannot target and destroy.

Recently, researchers from the Einstein College of Medicine in the United States published a research paper entitled: Listeria delivers tetanus toxoid protein to pancreatic tumors and induces cancer cell death in mice in Science Translational Medicine , a subsidiary of Science .

These Listeria bacteria persist in tumor tissue and are cleared by healthy tissue, thereby activating T cells kill tumors , and when combined with chemotherapy drugs such as gemcitabine , can quickly clear pancreatic cancer cells and reduce cancer metastasis by 87%, and greatly extend lifespan.

Take advantage of the tetanus vaccine

The vast majority of people were vaccinated against tetanus as a child to prevent disease caused by infection with tetanus bacterium, a tetanus toxoid made from a toxin produced by the tetanus bacterium.

The specific memory T cells induced by tetanus toxoid circulate in the blood for life, and people who receive this vaccine will develop a strong immune response if they are later exposed to the tetanus toxin produced by tetanus bacteria.

The research team used the same tetanus vaccine as humans to inoculate mice with pancreatic cancer, and then integrated the gene encoding the tetanus toxin into non-pathogenic Listeria , a bacterium that rapidly infects human cells and colonizes tissues. spread. The team then injected the modified Listeria into pancreatic cancer model mice that had previously been vaccinated against tetanus.

Dr. Gravekamp and her colleagues effectively elicited a potent and specific immune response against pancreatic cancer cells by infecting them with bacteria that deliver tetanus toxin into the cells.

Harnessing the inhibitory environment of cancer

Listeria is actually very weak and easily killed by the immune systems of humans and animals, except in the tumor microenvironment .

T cell responses can be further enhanced by adding low doses of gemcitabine , a chemotherapy drug that lowers immunosuppression .

The treatment reduced the size of pancreatic tumors in mice by an average of 80 percent, reduced cancer metastasis by 87 percent, and lived 40 percent longer in treated mice than in untreated mice. 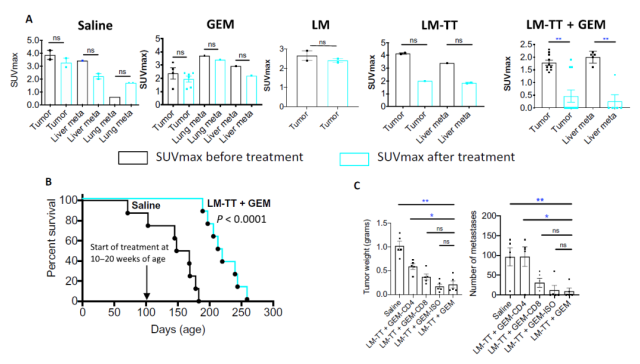 In addition, the team said the treatment could also be used to treat other types of cancer besides pancreatic cancer, such as ovarian cancer, for which current immunotherapies do not respond well.

It is reported that this research has been authorized to Loki Therapeutics for subsequent commercial development. Professor Claudia Gravekamp , ​​the corresponding author of the paper, is also the co-founder and chief scientist of Loki Therapeutics .