NEJM: Is radiotherapy necessary for low-risk thyroid cancer? This study has the potential to rewrite the guidelines

To reduce the risk of tumor recurrence, after thyroidectomy, radionuclides (iodine-131) are also usually used to destroy residual thyroid tissue and remove possible residual thyroid cancer cells, but this radiation therapy can take some time in the patient’s life. Influence (such as fertility, etc.) and there are certain side effects (such as parotid gland damage) [3].

Recently, the team of Professor Sophie. Leboulleux from the University of Paris-Saclay published the results of a large-scale randomized controlled clinical trial (ESTIMABL2, NCT01837745) in the New England Journal of Medicine [5]. Patients, after 3 years of treatment, those who did not receive iodine radiation had no worse prognosis than those who received iodine radiation (1.1 GBq) .

The results of this multi-center clinical trial will further optimize the indication selection for radioactive iodine therapy after thyroid cancer surgery, if it is consistent with the results of another similar multi-center clinical trial[6] (completed, data analysis ongoing) If so, it will likely change the guidelines and save many patients with low-risk thyroid cancer from radiation therapy . 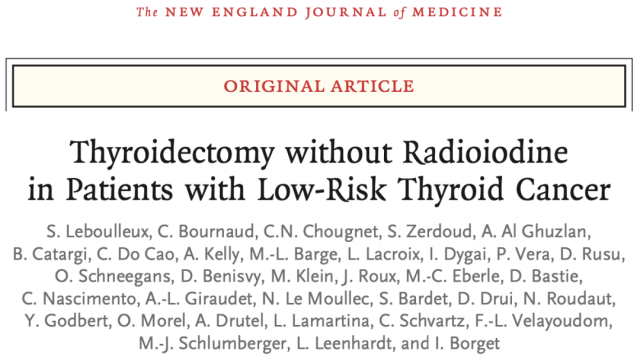 The inclusion criteria for this clinical study, called ESTIMABL2, were: adult patients with pathologically proven differentiated thyroid cancer (papillary, follicular, or eosinophilic thyroid cancer) , multifocal pT1a tumors (diameter of each lesion) ≤ 1 cm and the sum of the longest tumor diameters ≤ 2 cm) or pT1b tumors (1 cm < tumor diameter ≤ 2 cm) , no regional lymph node involvement or regional lymph node metastases cannot be assessed due to no neck dissection, no thyroid external invasion. In addition, all patients underwent neck ultrasonography postoperatively, and no abnormalities were found.

The non-inferiority design of this study was to assess whether the no-RT group had a functional event (full-body scan or SPECT showing foci of extrathyroid radioactive iodine uptake, which was only for the RT group) , structural event (neck ultrasound ) Suspicious mass found and biopsy cytology) and biochemical events (abnormal thyroglobulin or thyroglobulin antibody levels) were not inferior to RT in the event-free rate (noninferiority definition: no functional, structural, biochemical events). of patients with a between-group difference of less than 5 percentage points). 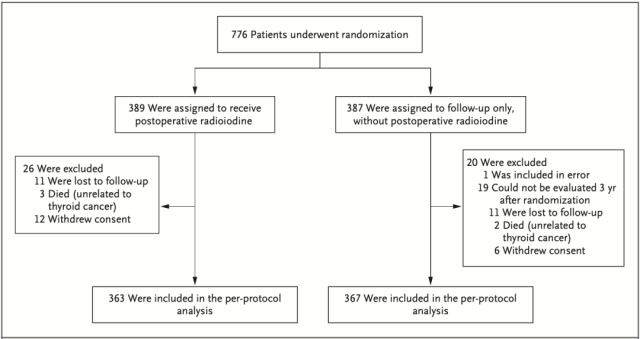 Finally, a total of 776 patients from 35 French centers were included in the cohort. The mean age of the patients was 52 years, 83% were female, and the histological examination was dominated by papilloma (95.9%).

Among the 730 patients evaluable with complete follow-up data, the non-function, structural, and biological event rates were 95.6% in the no-RT group and 95.9% in the RT group, with a difference of 0.3 percentage points between the two groups (90% bilateral ). %CI, −2.7-2.2) , meeting the non-inferiority margin . 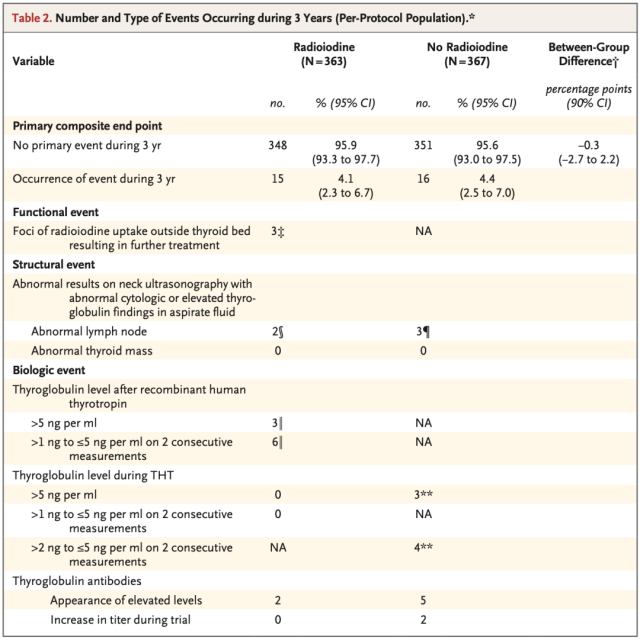 Functional, structural and biochemical events in the no-RT group and the RT group 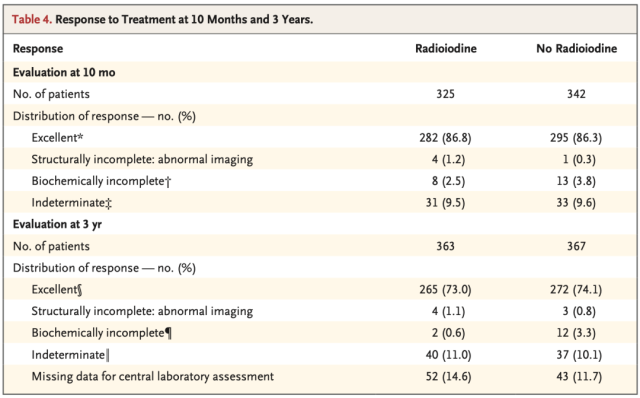 During the 3-year follow-up period, a total of 14 patients (4 in the no-RT group and 10 in the RT group) received additional treatment (surgery, radioactive iodine therapy, or both) and others with abnormal events The patient received no additional treatment during follow-up. In addition, 30 patients experienced adverse events, none of which were determined to be treatment-related upon investigation.

Next, the researchers assessed the quality of life of the two groups of patients. Corresponding scale results showed that patients in the no-RT group and the RT group had similar scores in terms of overall quality of life, anxiety, distress, and fear of relapse .

The researchers also searched for predictors of functional, structural and biochemical events through univariate analysis.

The analysis found that patients with tumor diameters less than 14 mm and patients with postoperative serum thyroglobulin levels higher than the cut-off value had functional, structural and biochemical events. The risk of the event is higher . 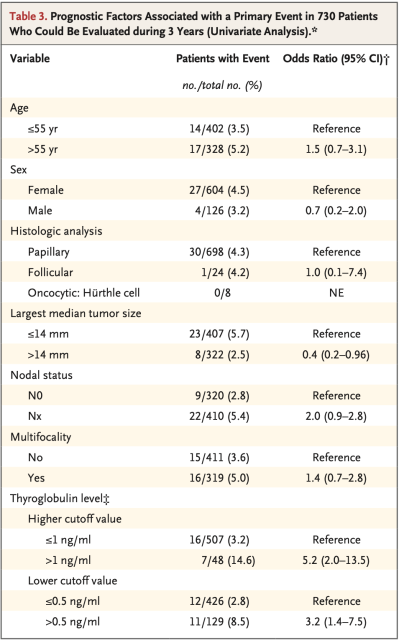 There was no significant difference in the frequency of BRAF gene mutation between the case group (61.5%) and the control group (53.1%), and no difference between the groups was found for other mutations .

It is worth noting that in previous studies involving patients with low-risk thyroid cancer, most tumor recurrence occurred in the first 5 years of follow-up, while this study only followed patients for 3 years, and it would be more difficult if longer follow-up data were available. persuasive.

However, the flaws do not hide the beauty. In this multicenter randomized controlled trial involving patients with low-risk differentiated thyroid cancer, the researchers demonstrated for the first time that patients who did not receive radioactive iodine after thyroidectomy had a non-inferior prognosis compared to those who received radioactive iodine Opportunity to get rid of the troubles and toxic side effects caused by radioactive iodine therapy .