Three simple ways can reduce the risk of cancer in people over 70 by 61%!

New research from the University of Zurich: Three simple ways can reduce the risk of cancer in people over 70 by 61%!

Cancer is considered an aging-related disease, and the risk of many types of cancer begins to rise in middle age.

In the United States, more than 90% of all cancer deaths are diagnosed in middle-aged and elderly people over the age of 50, and only 1.7% under the age of 40. 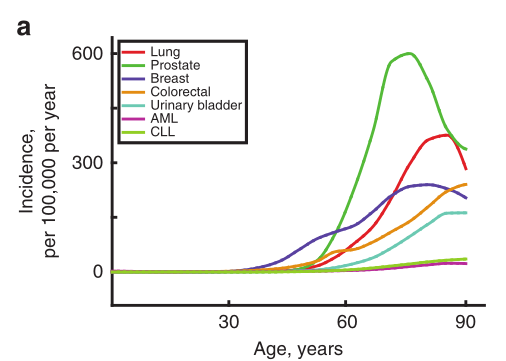 There are some common biological mechanisms between aging and cancer. Aging markers, such as genomic instability and epigenetic changes, are also cancer markers. With the occurrence of chronic inflammation and decreased immune function caused by aging, they are malignant cells. , proliferation and transfer provide conditions.

However, aging does not always accompany cancer. An interesting phenomenon is that the centenarians who live the longest rarely have cancer. They spend their old age peacefully and die of natural old age.

Although centenarians are rare, if we choose a healthy lifestyle, reduce risk factors and even slow down the speed of aging, we may be able to largely avoid the outcome of cancer in old age.

Recently, the latest research by a research team from the University of Zurich in Switzerland has provided us with an idea: through three simple ways – 2000IU/day of vitamin D, 1 g/day of omega-3s (common in deep-sea fish and some Unsaturated fatty acids from plants) combined with simple strength training can reduce the risk of cancer in people over 70 by 61%! The study was published April 25 in Frontiers in Aging.

Unfortunately, in human trials of cancer prevention, the effects of vitamin D and omega-3s are not significant, and sometimes the results obtained are “no effect”, which is quite different from the results of previous cell and animal experiments.

But researchers do not give up easily. We know that in the process of cancer treatment, several treatment methods or drugs are often used in combination. So, can cancer prevention adopt the same idea and combine several prevention methods, so that the small prevention benefits can be accumulated to achieve considerable results?

Based on this, this study, also known as the DO-HEALTH trial, aimed to investigate the effect of different interventions alone or in combination to prevent cancer was born.

The researchers conducted a 3-year trial in 5 countries, Switzerland, France, Germany, Austria and Portugal. A total of 2157 healthy participants were included, with an average age of 74.9 years and good physical and cognitive abilities.

To test the preventive effects of the three interventions, “2000 IU/day of vitamin D, 1 g/day of omega-3s, and simple strength training,” alone and in combination, participants were randomly assigned to 8 different groups:

Participants will undergo annual clinical physical examinations at the initial stage of the trial and for the first, second, and third years thereafter, and will receive a return telephone interview every 3 months.

By the end of the trial, a total of 81 participants had been diagnosed with new cancers and analyzed:

Although the sample size of this trial is not large enough and the time span is not long enough for a study with cancer as the end point, it shows that the combined use of multiple cancer prevention methods has an additive effect and can eventually lead to cancer prevention. The risk was reduced to statistical significance.

Researcher Bischoff-Ferrari said that in addition to preventive advice such as smoking cessation and sun protection, cancer prevention efforts for middle-aged and elderly people are mainly cancer screening and vaccination.

This is the first randomized controlled trial to demonstrate that daily supplementation of 2000IU/day of vitamin D, 1 g/day of omega-3s combined with simple strength exercise can effectively prevent the risk of invasive cancer in people over 70 years old.

Considering that the aging of the population in the future is likely to cause a surge in elderly cancer patients, which will bring a heavy medical and economic burden to individuals, families and society, the importance of cancer prevention is becoming more and more significant. .

Three simple ways can reduce the risk of cancer in people over 70 by 61%!