BMC Medicine: Moderate sun exposure may help prevent ‘Dementia’.  A study of 360,000 people found that it is best to be in the sun for so long a day on average.

The acceleration of global aging has gradually brought the medical term “senile dementia” into the lives of ordinary people. Various studies are emerging every year, and some people even shouted the slogan “cancer is not terrible, dementia is more terrible”.

On April 25, Professor Yu Jintai’s team from Huashan Hospital Affiliated to Fudan University and Tan Lan’s team from Qingdao Municipal Hospital Affiliated to Qingdao University published a paper in BMC Medicine（8.775/Q1),  entitled “Time spent in outdoor light is associated with the risk of dementia: a prospective cohort study of 362094 participants“.

A prospective cohort study of 362,094 participants over a nine-year period revealed for the first time a statistical association between sun exposure and dementia, suggesting that moderate sun exposure could help prevent “senile dementia.” , which refreshed our understanding of dementia prevention. 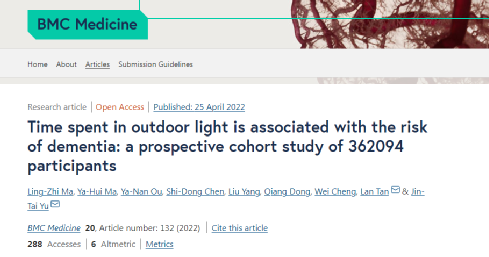 Bradstreet said: Where the sun shines is where I live .

Sunbathing is the most common way of health care in our life. A large number of recent studies have also shown that sun exposure has an important impact on the body’s vitamin D (VD) synthesis and absorption, sleep rhythm adjustment and other physiological functions.

Bright light therapy (BLT) has been recognized as a promising non-drug dementia intervention.

However, previous studies did not have direct epidemiological evidence to prove the relationship between sunlight and dementia, and there are few related population studies.

In addition, British 4-64 year olds generally believe that sun exposure and adequate vitamin D supplementation are sufficient, so summing up vitamin D in the British population is not a strictly required dietary vitamin.

With this in mind, this paper conducted a large-scale cohort study of the longitudinal association between daytime light exposure and dementia-related outcomes in the UK population. 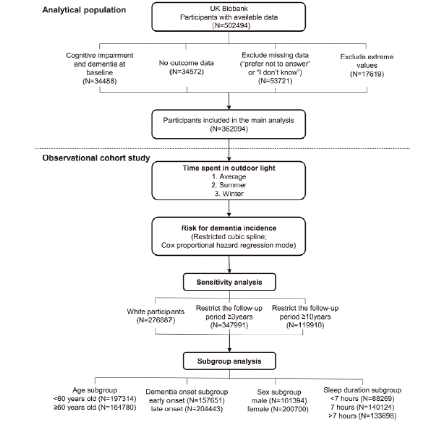 After statistical analysis, the article found that of the 362,094 active volunteers, 4,149 (1.15%) were diagnosed with dementia during the 9-year follow-up period.

After analysis, this may be related to lower education, never or little sun protection, unemployment, sleep disturbance, higher PM 2.5 exposure, smoking and drinking, and cardiovascular disease.

Crucially, the statistics found that people with dementia spent significantly longer on average in outdoor light than volunteers without dementia.

This caught the attention of the researchers, who then explored the relationship between outdoor light hours and dementia.

Significant increases in dementia risk were observed with either too high or too low sun exposure .

The piecewise nonlinear model analysis showed that an average of 1.5 hours per day, 2 hours per day in summer and 1 hour per day in winter were the most beneficial for reducing the risk of dementia.

The multivariate cox regression analysis showed that both above and below the 1.5-hour mean significantly increased the risk of dementia.

Overall, there was a “J-shaped” curve between sun exposure time and dementia risk. The increased risk of dementia was significantly accelerated with shorter light exposures and relatively slow with longer exposures. 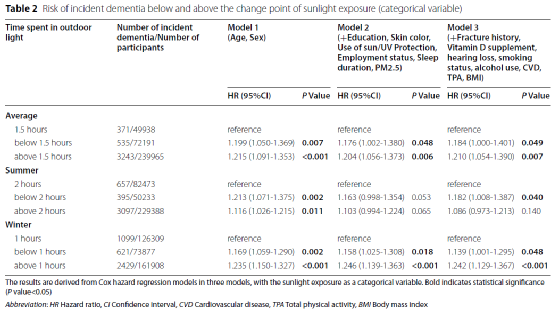 To further rule out statistical error, the researchers observed similar results after excluding data from people who were followed up for less than 3 years and more than 10 years.

When all variables were included in the analysis, the results did not change.

The benefits of basking in the sun are recognized, but the disadvantages are also obvious!

So the article also talks about the disadvantages of sun exposure at the end, including sunburn, skin cancer (melanoma, lip cancer, and keratinocytes) and eye diseases (cataracts, UV keratitis). Therefore, the optimal lighting time found in this paper is more meaningful.

The same is true of sunbathing, just in moderation!