How many steps does it take to turn normal cells into cancer cells?

Science: How many steps does it take to turn normal cells into cancer cells?

Scientists have identified thousands of genetic mutations in cancer over the past two decades, but understanding how these genetic mutations affect tumor growth and spread in the body remains challenging because each patient’s tumor can have many different Gene mutation.

This has led to the inference of genotype and phenotype linkages from cancer patients, and being able to systematically link genetic mutations or combinations of mutations in cancer to their phenotypes would greatly advance our understanding of cancer pathogenesis and help develop corresponding treatments and medicines.

These edited cells grew and proliferated into tumors with melanoma characteristics, including rapid growth, Increased invasive capacity, as well as specific gene activation and pigmentation patterns. 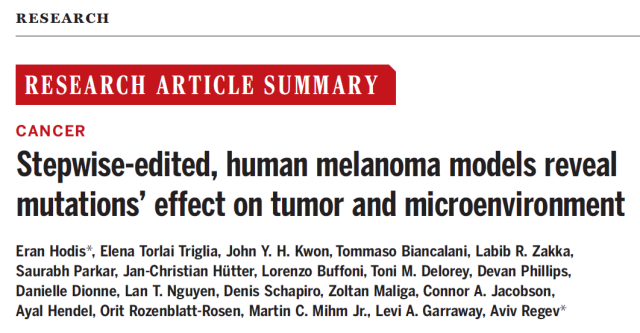 The study’s lead author, Eran Hodis , began the research as a PhD student in the lab of Aviv Regev , now a resident at Harvard’s Brigham and Women’s Hospital, and Aviv Regev joined Genentech in 2020 as a research and early-stage resident Executive Vice President of Development.

According to Eran Hodis , the study is the first to use precisely controlled genetic engineering techniques to create a human cancer model starting from fully differentiated cells rather than stem cells .

This approach will open up opportunities to create similar models in many other cancers, helping to accelerate the study of the association of cancer genetics with specific disease characteristics.

In order to design these cancer models, precise gene editing techniques must be combined with high-resolution, massively parallel single-cell genomics analysis to generate and characterize cells and tumors, and to Machine learning to analyze data.

Taken together, these findings give us an unprecedented understanding of which genetic mutations, and combinations thereof, cause cells to become cancerous.

When studying melanoma, linking its genotype to a specific trait or phenotype is particularly difficult. This is because melanoma, as a skin cancer, exposes the skin to many external factors, such as UV rays.

Therefore, there are many gene mutations caused by external factors in melanoma patients, and most of these gene mutations are not driving factors of melanoma.

Next, the research team knocked out the known melanoma-related tumor suppressor genes PTEN, TP53 and APC in the above-mentioned cells respectively, generating a total of 9 different cell models:

Then, the research team implanted the above-mentioned nine cell models into mice and observed them.

The study also showed that,CDKN2A -/- + BRAF V600E + TERT -124C>T mutations, when present together, cause cells to behave like cancer cells and divide indefinitely.

The tumors grew fastest when the three mutations described above, plus inactivation of the PTEN and TP53 genes .

These models were then characterized in vitro and in vivo using physiological assessment, histopathology, single-cell RNA sequencing, and machine learning algorithms.

Through these cellular models, melanocyte genotypes were linked to phenotypes such as gene expression programs, replication and immortality, malignancy, rapid growth, pigmentation patterns, tumor metastasis, and histopathological features. and identified genetic mutations that cause melanoma tumor growth, metastasis, and changes in the tumor microenvironment.

What’s more, the study not only revealed key genetic mutations in melanoma, but also suggested a new way to study the role of specific genes in cancer .

How many steps does it take to turn normal cells into cancer cells?