Why do mosquitoes only bite you and not others?

Why do mosquitoes only bite you and not others? This group of scientists did not take a bath for several days to find the reason

As soon as the beginning of summer is over, summer officially kicks off. And one of the most hated creatures of mankind, the mosquito, has also been ready to start looking for this year’s prey.

When a group of people sit together, there will always be a mosquito’s pet. When the lucky one is yourself, you must be thinking: why only stare at me and bite? Or can you not bite people, let the wealth of the family and Mimi be bitten at the expense of…

Do you know that wearing black clothes is more likely to attract mosquitoes?

What we may not know is that many mosquitoes do not necessarily have to catch a human to bite, but will pounce on a nearby blood source. However, our most hated “flower mosquito”, Aedes aegypti, has taken a different approach and has evolved into a species that specifically bites humans.

What exactly do they rely on to precisely target humans? New research in Nature found that this may be related to special odor molecules in humans.

Human odors are made up of dozens of different compounds, while other mammalian odors may have similar types of compounds, only in varying proportions of the various molecules.

For example, the proportion of various seasonings in cooking is different, and the aroma is also different. The ratio of these compounds also creates a special human odor.

But how did Aedes aegypti identify the particular molecule? The first thing scientists do is collect different scents to analyze and test how Aedes aegypti responds to them.

This is also the most interesting part of the study. The researchers collected the odors of humans, rats, guinea pigs, quails, sheep and dogs. Most of the animal odors are obtained from their hair, such as those donated by farms. Wool, dog hair from a veterinary hospital…and scientists may have to put their hands in the system to attract mosquitoes.

Researchers from Cornell University found that even human odors in everyday situations are enough to attract Aedes aegypti mosquitoes, and mosquitoes are significantly more interested in human odors. 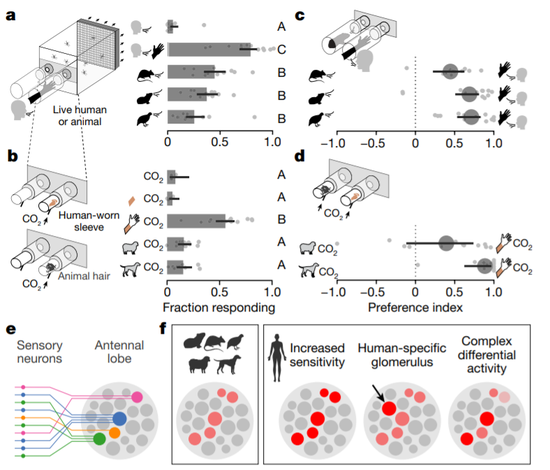 And when they want to further analyze which compounds in human odor play a role, the “sacrifice” the researchers make is even greater. The researchers went several days without bathing, then stripped down and lay down in Teflon bags to collect scents.

Dr. Zhilei Zhao explained: “In this way, the odor concentration is relatively high, and we can collect a large number of odors for experiments in a relatively short period of time; in addition, artificial fragrances are often added to shampoos and body washes, so that may interfere with the experimental results.”

And because the cotton, polyester or other fibers of the clothes will also produce unique odor molecules that affect the actual data, this step must be nude.

In addition to collecting and analyzing odors, the research team also constructed special genetically modified mosquitoes whose brains, such as the olfactory glomerulus in the primary olfactory brain area, fluoresce when activated, allowing them to see which neurons are activated when they receive odors. activated.

The study then began to test how the mosquito brains responded to exposure to different compounds. They had expected that this precise distinction might require the use of the vast majority of the olfactory glomeruli, but the results came as a surprise to the researchers.

Different odors activate different combinations of olfactory glomeruli. But of the many olfactory glomeruli, only two are involved in the process of screening human odors. No matter how many human or animal samples are used, the results are that simple.

One of the olfactory bulbs responds to many odors, including human odors, and can guide mosquitoes in the direction of the scent, while the other olfactory bulb responds only to humans but weakly to other mammalian odors. Under this combination, mosquitoes will run towards humans without hesitation. 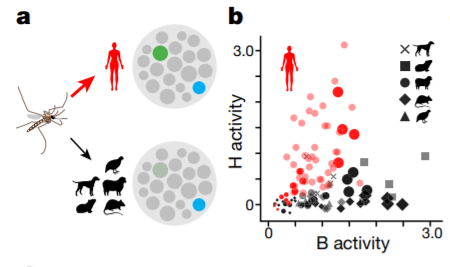 The olfactory globules are particularly sensitive to two specific molecules, decanal and undecal.

These two molecules are highly enriched in human odorants and less so in mammals. Our sebum and metabolism determine this and make us prey to Aedes aegypti.

By artificially synthesizing a mixture of the two molecules, the mosquitoes also started their host-seeking behavior after they were sent to the wind tunnel.

Therefore, theoretically, if some people metabolites have a particularly high amount of decanal and undecaldehyde, they will easily become the target of mosquitoes.

Dr. Zhilei Zhao said: “There are too few or too many aldehydes, and mosquitoes don’t like them. So theoretically, it is possible to interfere with mosquito bites by increasing or decreasing the concentration of these two aldehydes in human odors. Of course, now There are no well-established methods to specifically mask these two molecules.”

but! You can’t cover up the smell, you can also set up smell traps to catch mosquitoes, which is likely to bring a new generation of mosquito control technology! (looking forward to)

According to Dr. Zhao Zhilei, the study found that a specific ratio of decanal-containing mixture is very attractive to mosquitoes.

At present, the research team has applied for a patent based on this, mainly using the mixture in mosquito traps to attract and kill mosquitoes.

Before it is officially commercialized, field experiments are still needed to test whether it can also efficiently attract mosquitoes in the wild.

If it works, it’s like the blue light flycatcher you see in restaurants. Maybe you can install a small device in the future and you will no longer have to worry about mosquitoes.

Why do mosquitoes only bite you and not others?