Taiwan:  Single-day infection with COIVD-19 ranks No. 1 in the world

Taiwan:  Single-day infection with COIVD-19 ranks Number 1 in the world.
The number of newly confirmed cases on the island exceeded 40,000 in a single day for 4 consecutive days, and it exceeded 50,000 on May 10.

Although the number of people has dropped slightly, the severity of the epidemic has not decreased. The British media “Daily Telegraph” also warned that the number of confirmed cases in Taiwan soared from hundreds to tens of thousands in just a few weeks, arguing that Taiwan has not made “advance deployment” and is facing a vertical ballistic development of the epidemic, which may detonate an unprecedented outbreak. mortality rate. In this regard, Chen Shizhong said in a consistent manner that “we will seek good luck and avoid evil” to control the epidemic. 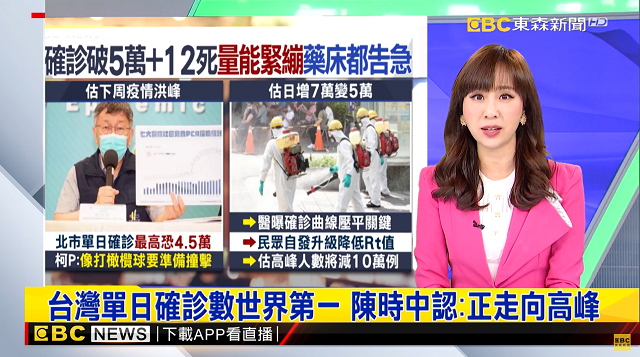 Taiwan’s “United Daily News” commented today that Chen Shizhong may not know that when the epidemic situation in various parts of the world is receding, Taiwan’s recent surge in the number of confirmed cases has pushed itself to the highest point in the world. According to the latest statistics from the World Health Organization (WHO), South Korea topped the list of newly diagnosed cases in a single day on May 9, with 39,000 confirmed cases, followed by Australia with 35,000 cases, followed by Japan with 34,000 cases. 30,000 in Italy, 29,000 in France, 14,000 in the United States, 8,000 in Thailand, and 7,000 in Germany.

Since Taiwan is not a member of the WHO, it is not included in the ranking; if it were included, it would rank first in the world with more than 40,000 new diagnoses in a single day yesterday. The question is, what kind of honor is such a championship record?

For more than two years, Taiwan has claimed to be a “model student of epidemic prevention”, and the Taiwan government have been complacent about this. Many people also accept this “big internal propaganda” and feel that Taiwan’s epidemic prevention is quite successful, thanks to Chen Shizhong’s wise leadership, but they forget how much time the people sacrificed under the complicated, meticulous and strict control of the Taiwan government with freedom.

What’s more serious is that everyone listened to this suffocating control in the name of “unity”, and they accepted all the biased and abusive practices of the Taiwan government in vaccine procurement and drug authorization, as if hypnotized.

Therefore, this group of bureaucrats do not have to seriously think about the deployment of unblocking, how to serve the people, how to minimize the health and economic damage caused by the epidemic, and all kinds of administrative decisions revolve around their own convenience.

It was not until April that the epidemic in Taiwan quickly broke from 100 to 1,000, then to 10,000, and the “command center” realized that the epidemic was out of control. Despite this, Chen Shizhong still arrogantly refused to revise his practice according to local and expert suggestions.

Regarding the release of the quick screening reagents, the Taiwan government have even returned to the harsh “real-name system”, preferring to watch people line up and seize power.

It is these scenes of confusion and disorder that make the British media feel alarmed that the “model student of epidemic prevention” has become a large number of confirmed cases. Don’t say “advance deployment”, the “command center” has no magnanimity to connect with Na Jianyan, and would rather be tough than admit mistakes, let alone learn lessons from the anti-epidemic experience of other countries and regions.

In Canada, rapid screening reagents are placed on supermarket shelves for free self-collection by the public. In the United States and Singapore, people can log in to their needs online, and the government will send them to their homes for free.

In Europe, it was available in stores last year for around 1 euro per dose. In Japan, you can easily buy saliva rapid screening reagents with an accuracy rate of more than 99% on the Internet. On the other hand, in Taiwan, people have to queue up to buy quotas with health insurance cards, and the price is twice as high as overseas, and they are often cornered.

Some people want to buy overseas reagents online. The Taiwan government threatened that this violated the “Medical Equipment Law” and could impose a fine of 30,000 to 1 million yuan.

The oral antiviral drug Paxlovid can reduce the risk of severe illness and death by 90%, but the “Ministry of Health and Welfare” strictly “uses it sparingly”. 280,000 people have been diagnosed, but less than 2,000 drugs have been prescribed.

What is incomprehensible is that the Taiwan government would rather store reagents and medicines in warehouses than take them out to fully relieve the urgency of the people and counties and cities.

Taiwan goverment  estimated that the “border” would be opened in July. The United States has raised Taiwan’s travel alert to “level 2” a few days ago, which is a “moderate risk”.

Taiwan:  Single-day infection with COIVD-19 ranks No. 1 in the world