On May 10, a news report was published on the homepage of the well-known journal Science website, titled “New versions of Omicron are masters of immune evasion”.

In this report, Dr. Wang Lin-fa, an expert on emerging infectious diseases (virologist, academician of the Australian Academy of Technology and Engineering, and director of the Institute of Emerging and Emerging Infectious Diseases, Duke-NUS School of Medicine) proposed that according to the Omicron strain Immunological characteristics, it is proposed to define it as SARS-CoV-3, a virus completely different from SARS-CoV-2.

This view quickly attracted the attention of the scientific community, with Science senior editor Jon Cohen agreeing on his personal social account: “Dr. Wang made a very important point: we should be based on serotypes (previously for polio virus , dengue virus typing method) or type new coronavirus based on virus genotyping?

The core of traditional vaccine design technology is based on virus antibody neutralization ability, but so far, the guidance brought by genotyping method The effect pales in comparison.” 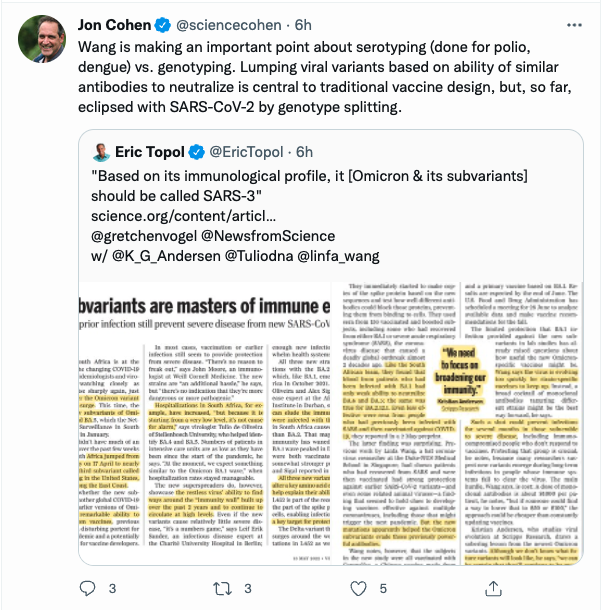 The following is a compilation of Science reports.
“
South Africa is once again at the forefront of the changing Covid-19 pandemic, and just five months after the Omicron variant sparked a surge in local cases, local cases have risen sharply again, drawing the scrutiny of epidemiologists and virologists.

This time the local epidemic is sparked by two new subtypes of Omicron: BA.4 and BA.5, first detected by the South African Genome Surveillance Network in January of this year.

At the same time, another new subtype, BA.2.12.1, is circulating in the United States, leading to new cases on the East Coast.

It is unclear whether these new subtypes will trigger a new global epidemic, but like the earlier Omicron strains, these new subtypes also have strong vaccine immune evasion and secondary infection capabilities – an alarming An omen of unease, but also a huge challenge that vaccine developers may face.

In most cases, vaccination or early infection can prevent infectious diseases. “There’s no reason to panic,” says immunologist John Moore, adding that the new subtypes of Omicron are “an added nuisance, but there’s no sign that they’re more dangerous or deadly.” Despite the increase in hospitalizations in South Africa, “considering that this increase started from very low numbers, there is no need to worry.”

Tulio de Oliveira, a virologist who helped identify the two subtypes, BA.4 and BA.5, said that the current number of severe cases remains at a level consistent with the early stages of the pandemic, and we expect the infection trend of the new subtype to be similar to that of Omicron BA.1 Subtypes are similar,” and the previous hospitalization rate was maintained within a manageable range.

These new subtypes did, however, demonstrate the ability to bypass the population immune barrier established over the past 2 years and sustain high transmission.

Infectious disease expert Leif Erik Sander believes that even if the new subtypes cause relatively few severe clinical symptoms, “it’s a numbers game” because enough new infections could still cause the health system to collapse.

All three new subtypes have the same mutations as the Omicron BA.2 subtype and appeared in South Africa in October 2021, like the Omicron BA.1 subtype.

Preliminary research by infectious disease specialists de Oliveira and Alex Sigal suggests that both BA.4 and BA.5 subtypes can evade the immunity established in patients who had been infected with the BA.1 subtype, triggering a stronger infection in South Africa than the BA.2 subtype. Higher infection peaks.

This may be because population immunity has gradually waned after the peak of BA.1 infections in South Africa last December.

Recovered people who have completed the COVID-19 vaccination and have been infected with the COVID-19 have stronger immune protection in the epidemic of this new subtype. The above findings were published on the preprint platform on May 2.

All three new subtypes carry the L452 mutation, which may help explain their immune evasion ability. The L452 protein is part of the SARS-CoV-2 receptor-binding domain, which is also an important site of action for protective antibodies.

The Delta strain, which once sparked a global surge in cases in 2021, also carries the L452 mutation, an area that many scientists around the world are closely watching.

Cao Yunlong, an immunologist from Peking University, introduced that on April 11, he and his colleagues noticed a new pattern: L452 mutations were present in new Omicron subtypes from New York, Belgium, France and South Africa. “Four different mutations independently at the same site? That’s not normal.”

The researchers believe that this is the virus’s response to higher population immunity brought about by previous large-scale infections with Omicron.

Cao Yunlong and others immediately began to replicate the new isoform of the S protein and tested the neutralizing ability of different antibodies.

The researchers used serum from 156 subjects who had completed the booster vaccination, some of whom had been infected with Omicron BA.1 or SARS virus.

Like the South African research team, they found that the sera of subjects who had been infected with BA.1 had weak neutralization ability for the three new subtypes of BA.4, BA.5, and BA.2.12.1, and had previously been infected with SARS.

And the sera of subjects who completed the COVID-19 vaccination were less able to neutralize the new subtype, a finding reported by the team in a preprint study released on May 2.

This finding is surprising. Dr. Wang’s previous work from Duke-NUS Medical School of Emerging Emerging Infectious Diseases showed that subjects who had previously been infected with SARS and completed the COVID-19 vaccination were less susceptible to early SARS-CoV-2 variants and even some related animals.

Viruses are all highly protective, and the finding seems to provide clues for the development of effective vaccines against a variety of coronaviruses, but this time the new Omicron subtype has apparently been able to achieve immune evasion against this protective antibody.

Dr. Wang said that according to his research, subjects vaccinated with the mRNA COVID-19 vaccine may have stronger protection against the new subtype. Dr. Wang said that the immune evasion ability of the Omicron strain is surprising.

He proposed that based on the immunological characteristics of the Omicron strain, “it is recommended to define it as SARS-CoV-3”, that is, a completely different Virus.

The rapid changes in Omicron have brought many challenges to vaccine development and epidemic prevention policy formulation. Should we stick to vaccines developed for early new coronavirus strains, or switch to developing new vaccines?

Previously, Moderna said it had tested two different versions of the mRNA COVID-19 vaccine, for the protective power of the COVID-19 early strain, the Beta strain (which spread in South Africa for a while in 2021 and has now disappeared) and the Omicron BA.1 subtype, But the company did not disclose protection data for the new subtype.

Pfizer, another maker of mRNA COVID-19 vaccines, said it had tested primary immunization and booster protection against BA.1, with results expected by the end of June. The FDA has scheduled a June 28 meeting to analyze its disclosed data and make recommendations for fall vaccinations.

However, laboratory results have shown that protection against BA.1 infection is limited for the new Omicron subtypes, which has sparked discussions about the efficacy of the newly developed Omicron vaccines.

Dr. Wang said that the evolution of the COVID-19 virus is so fast that the development of COVID-19 vaccines for specific strains cannot keep up, and a broad range of monoclonal antibody drugs for different strains may be a better follow-up direction.

Dr. Wang said that this method can provide protection for vulnerable groups, such as those with low immunity and unable to respond to vaccines.

Protecting this group is critical, he suggests, because many researchers suspect that the immune system’s inability to clear viral populations may develop new mutations during prolonged infection.

The main obstacle to this therapy is cost: a single treatment costs $1,000 per patient, “but if someone can find a way to bring that down to $50 or $100,” that could be cheaper than constantly developing new vaccines.

Kristian Andersen, a scientist who studies viral evolution, has drawn sobering lessons from the latest Omicron subtype, saying that while we don’t know what future variants will look like, “we can be sure that their immune evasion capabilities will become increasingly The stronger it is,” which may mean that our protection against infection or conversion to severe disease is decreasing. “We need to continue to pay attention to strengthening population immunity.” While it’s unclear which vaccines are effective at boosting immunity, “we really need to start figuring that out. If we let the virus continue to infect, and maybe a few times a year, that’s not feasible in my opinion. “