42 deaths from “fever” in North Korea: Half are less than 60 years old

Analysis of 42 deaths from fever in North Korea: half of the dead are less than 60 years old.

“The spread of this epidemic is the biggest turmoil that North Korea has faced since its founding.”

So far, the cumulative number of reported fever cases in North Korea has exceeded one million, reaching more than 1,213,550; a total of 50 deaths have been reported. About 560,000 people are still receiving treatment.

Kim Jong-un said in a speech that the current spread of the epidemic in North Korea is not uncontrollable, and if he maintains strong organizational and control capabilities, the crisis will be overcome. “It is necessary to study the epidemic prevention policies, achievements and experience of other developed countries, and it is best to actively learn from China’s advanced and rich epidemic prevention achievements and experience in the fight against the epidemic.”

“North Korea only reports ‘febrile people’, or because it does not have enough COVID-19 testing reagents.” CNN and other media quoted Cheong Seong-chang , director of the North Korea Research Center of the Sejong Institute in South Korea, as saying, “Some people with fever may not be COVID-19. But in Among asymptomatic people with no fever, there may be more cases undetected. Therefore, the actual number of COVID-19 infections may be higher than officially announced.”

The death curve generally lags the infection curve by 1-2 weeks. The Chosun Ilbo quoted expert observations and reports that considering that North Korea does not have a COVID-19 vaccine and targeted treatment drugs, the cumulative number of deaths from “fever” cases may reach 100,000.

When reporting the cumulative number of infections, North Korea’s official news agency KCNA did not specify how many confirmed cases and deaths were related to the COVID-19 infection.

On May 16, North Korea’s CCTV interviewed Yoo Yong-chul (transliteration) , head of the North Korean National Emergency Epidemic Prevention Command, and analyzed some of the data.

In the program, North Korea’s Central Television announced a statistical table called “Vicious Virus Diagnosed Patients”, saying that a total of 168 people were diagnosed. North Korea is used to calling the COVID-19 a “malignant virus.”

However, North Korea’s CCTV did not explain how the above-mentioned patients were diagnosed and whether nucleic acid testing was used as the standard. Nor did it explain the relationship between febrile illness and the diagnosis of a “malignant virus”.

“NK News”, which is located in Pyongyang and specializes in reporting North Korean news, said that North Korea’s current number of cases is based on “fever patients” as a statistical caliber, which is related to its lack of nucleic acid testing, rapid screening mechanisms, and the inability to popularize CT and other imaging screening.

Imaging screening is one of the COVID-19 screening methods. According to a review published in 2020, the overall use of CT or MRI in North Korea’s medical device use from 2012 to 2018 was less than 5 percent.

The “KCNA” stated that the mortality rate has increased due to “no diagnosis” and “no treatment”.

Yoo Young-chul analyzed the situation of the 42 deceased earlier. Among them, 16 people were 61 years old and above, 7 people were 51-60 years old, and 6 children were under 10 years old.

Among the deceased, 22 suffered from chronic underlying diseases, such as high blood pressure. Two died of febrile cramps. 1 person died of laryngospasm. Another 17 people died of drug overdose.

Yoo Young-chul explained that this is mainly because children overdose or did not have allergy tests when using antibiotics, resulting in allergy deaths. 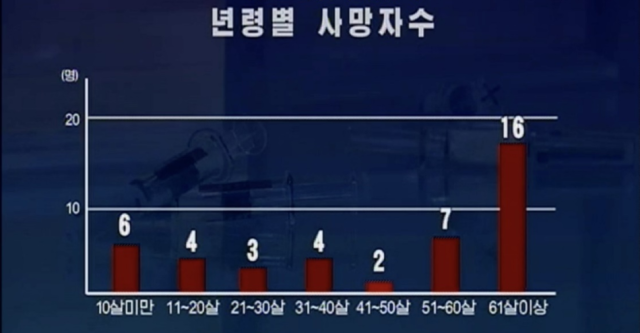 “It’s only a matter of time before the death toll increases dramatically.” The Chosun Ilbo quoted Zheng Jae-hoon , a professor at the Department of Preventive Medicine, Gachon University School of Medicine in South Korea as saying that South Korea’s reduction in severe cases under the Omicron wave was due to widespread vaccination , to acquire immunity through infection, to use targeted treatment drugs, and to improve intensive treatment techniques. But North Korea has none.

“The overwhelming challenge that North Korea is currently facing is that the country lacks an effective weapon to fight the COVID-19 epidemic.” The BBC analyzed that, first of all, North Korea’s medical and public health systems are weak.

According to the 2019 WHO assessment, North Korea’s medical system’s ability to respond to medical crises ranks 193rd among 195 major countries and regions in the world.

Some media also said that North Korea’s basic medical system may be able to undertake epidemiological and epidemic prevention work.

The vast majority of these doctors are “regional doctors”, and they go to grass-roots settlements to undertake regular health inspections and treatment for residents in the region.

“Whether North Korea’s health and medical system can function and function normally when millions of suspected COVID-19 patients flock to it is unknown.” Chosun Ilbo reported.

Over the past week, the Political Bureau of the Central Committee of the Workers’ Party of Korea held emergency meetings for several consecutive days to discuss epidemic prevention and anti-epidemic countermeasures.

At relevant conferences, the supply of medicines was not timely, most people did not master scientific treatment methods, and the death of people caused by excessive use of medicines was repeatedly mentioned.

At an emergency meeting on May 14, Kim Jong-un handed over the medicine prepared by himself to the Party Committee of the Workers’ Party Headquarters. The next day, at a meeting, he criticized health officials as “incompetent” and “irresponsible” and that most pharmacies were not equipped to fulfill their role satisfactorily.

The specific problems include that the medicines stored by the state are not provided to residents through pharmacies in a timely manner; the pharmacies have no place to store medicines except for display cabinets; the hygienic clothing of the pharmacy service personnel is not complete, and the hygienic environment is not up to standard.

In the “KCNA” report, when Kim Jong-un visited a pharmacy in Pyongyang on the spot, he learned about the thermal analgesics and antibiotics, which drugs are most in demand by residents, and what their prices are.

Kim Jong-un pointed out that military force should be used immediately to stabilize the supply of medicines in Pyongyang.

At the same time, the Politburo ordered the emergency release of medicines from the national reserve and all pharmacies open 24 hours a day.

According to NK News, as of the morning of May 16, the order was still not in place.

Based on reports from Reuters, The New York Times, and KCNA, it is impossible to confirm that North Korea has received anti-coronavirus drugs provided by the international community.

“Chosun Ilbo” analysis, these all imply a lack of medicine.

Another medical problem is high-dose, pre-medication. On May 14, Rodong Sinmun published an article proposing treatment methods for patients with no fever, mild fever, and severe infection.

Including, those with symptoms take Angong Niuhuang Pills once a day, 1-2 capsules each time. The instructions of the medicine show that adults take 1 capsule once a day.

Second, North Korea has not been vaccinated against the COVID-19.

North Korea’s total population is about 25 million, according to the United Nations. If the more than one million “fever” cases as of May 15 were all COVID-19, the number of confirmed cases would account for about 4% of the total population. This means that a large number of people do not have immune protection.

Moreover, North Korea is an “aging society”. According to the United Nations Population Fund, as of 2021, people aged 65 and over make up 9.6% of North Korea’s total population, which is higher than the “aging society” standard (7%) .

From the experience of Hong Kong, China in dealing with Omicron, it can be seen that in the face of Omicron and the more transmissible subline BA.2, the unvaccinated elderly people aged 60 and above are a very vulnerable group.

In the Hong Kong SAR epidemic, people over 60 had a 252 times higher risk of death than those under 30.

Among people 80 years and older, the death rate for those who completed the booster shot was 1/177 that for those who did not get the vaccine.

Peter Hotez , director of the National School of Tropical Medicine at Baylor College of Medicine, told the BBC: “They (North Korea) have to find a way to introduce a vaccine and vaccinate the population quickly.”

Implement high blockade, But to minimize the inconvenience and hardships of the people

The Chosun Ilbo concluded that North Korea is currently responding to the epidemic mainly through a nationwide complete blockade and door-to-door visits by epidemic prevention workers to find out those with fever. “More than 1.349 million people have invested in health promotion, testing, and treatment—find out those with fever and those with abnormal symptoms, thoroughly isolate them, and take treatment and countermeasures.”

Ben Cowling , an epidemiologist and biostatistician at the University of Hong Kong’s School of Public Health, told the BBC: “In North Korea, I think it’s going to be extremely difficult to stop this. At this point, I’m going to be very, very concerned. .”

“KCNA” quoted Kim Jong-un as saying that the party and government agencies should minimize the inconvenience and hardship experienced by the people under the implementation of a high-intensity blockade.

42 deaths from “fever” in North Korea: Half are less than 60 years old