The immune system (IS) consists of cells, organs and tissues and the substances produced during their activation.

All of these cells are derived from hematopoietic stem cells (HSCs) in the bone marrow. 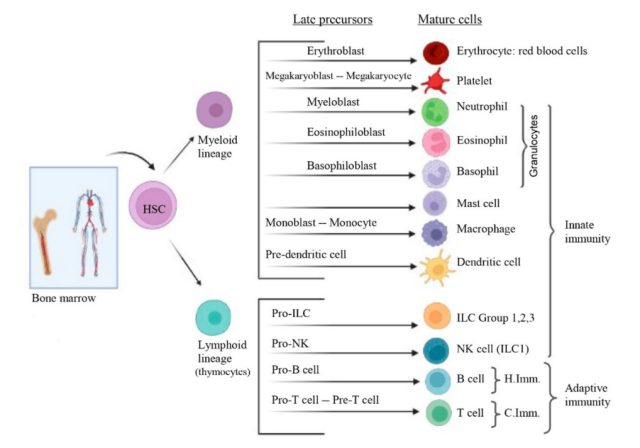 The organs and tissues of IS include primary and secondary lymphoid organs.

In IS, there are also a variety of biomolecules that enable the correct and timely activation of the immune system.

These include adhesion molecules (selectins, integrins, cadherins) as well as blood proteins such as antibodies, complement proteins and cytokines (eg interferons, chemokines, etc.).

Physical barriers in and out of vertebrates, including skin and other epithelial surfaces and their narrow joints, protect us from pathogens.

However, in many cases there are microorganisms that can cross the epithelial barrier/mucosal surface.

However, adaptive immune responses come into play when this response is not sufficient to fight off pathogens.

The word “innate” is derived from the Latin word “innātus”, so this is called innate immunity, because we are born with this immunity, which is able to trigger an immune response without prior exposure to the pathogen.

It is an early defense because it is rapid, that is, it is activated within hours or days of infection; however, this in turn makes it nonspecific. Furthermore, its strength does not change with exposure.

Natural IR is designed to prevent infection, eliminate invading pathogens, and stimulate an adaptive immune response. It’s vital to survival, so it’s found in the simplest of animals.

(2) Body fluids: blood proteins, such as components of the complement system and other inflammatory mediators, such as cytokines, C-reactive protein (CRP) or proteolytic enzymes;

Skin and other epithelial surfaces protect the vertebrate body from invading pathogens, however, microbes can cross the epithelial barrier/mucosal surface in many cases, so activation of the innate immune response is critical.

At this point, mast cells, basophils, and eosinophils are the first cells to act. Each microorganism has different pathogen-associated molecular patterns (PAMPs) that will be recognized by different pathogen recognition receptors (PRRs) present in APCs such as DCs.

Among them, TLRs are the most well-characterized receptors that can trigger the activation of adaptive immune responses.

It is triggered when a pathogen is present and is ready to recognize it upon a new attack or infection, thus avoiding reinfection with the same pathogen (immune memory).

Unlike innate immunity, its strength changes after repeated exposure to pathogens. Adaptive immunity is not present in all animals, which is a characteristic of higher animals.

The existence of immune memory makes it stronger and more specific than innate immunity, and therefore able to generate a more durable and specific response.

Immune memory is performed by both T cells and B cells due to the high reactivity of antigens.

As with the innate immune response, under normal conditions, self-antigens are immune-tolerant, so tolerance and immunity must be balanced.

This must be balanced by the survival, activation and expansion of lymphocyte clones (immunity) and the suppression and elimination of clones (tolerance).

During the development of an adaptive immune response, clonal selection (specificity of lymphocytes for antigenic epitopes) and clonal expansion (stimulation, proliferation and differentiation of lymphocytes) occur.

There are two types of adaptive immunity: humoral immunity and cellular immunity

Humoral immunity is mediated by activated B lymphocytes (plasma cells), which produce a large number of antibodies, each with a certain function.

They complete differentiation and are activated in response to antigen-dependent T cells.

B cells are responsible for recognizing antigens, neutralizing them and attacking them, which are then cleared by phagocytes and the complement system.

Instead, cellular immunity is mediated by T lymphocytes, which play a role when microorganisms cannot be eliminated despite being phagocytosed.

T cells continue to destroy these microorganisms and potentially infected cells by recognizing foreign protein peptides presented by the MHC.

It should be noted that innate immunity and adaptive immunity are interconnected, and this connection between them is mediated through APC activation of TLRs (Toll-like receptors) or through Fc receptors.

These APCs include macrophages, B lymphocytes, and DCs, the latter being the most efficient way to activate naive T cells.

The NCI defines a tumor as follows: “A tumor may be benign or malignant (cancer) when a cell grows and divides more than it should, or when an abnormal mass of tissue forms when it should not die. “

Cancer is a multifactorial disease due to a combination of genetic and environmental factors. A

Therefore, cancer is considered to be a dynamic disease, leading to tumor heterogeneity.

The reason for this difference is due to patient-specific factors such as germline genetic variation, differences in somatic mutational spectrum, and environmental factors. Intratumor heterogeneity refers to the genetic heterogeneity among tumor cells in a single patient.

The TME is composed not only of tumor cells, but also of stromal cells (non-tumor cells), which have important effects on tumorigenesis, pathogenesis, and tumor progression, as well as metastasis.

There is a growing body of research on how TME affects tumorigenesis, cancer progression, and metastasis.

Thus, the TME is able to switch the immune response from a tumor-destructive mode to a tumor-promoting mode depending on the composition of the TME.

Notably, tumor heterogeneity may also influence the behavior of the TME. In this context, tumor immunogenicity varies widely between different types of cancer and between individuals of the same type of cancer.

In addition to interactions between tumor cells and TME stromal components, cell-autonomous genetic and epigenetic changes are involved that may form a favorable environment for cancer development.

In the early 20th century, people began to think and study the relationship between IS and cancer, when Paul Ehrlich recognized the importance of individual IS for cancer prevention and proposed the term “immunological surveillance”.

Later, in the 1950s, Burnet and Thomas developed the concept of “cancer immune surveillance.” The term “immune surveillance” suggests that in the absence of treatment, the immune system can recognize and destroy early-stage tumors.

Support for the immune surveillance theory comes from studies in mice deficient in the IFN-γ gene, knockout mice for the IFN-γ receptor, which are 10-20-fold more susceptible to tumors induced by the chemical carcinogen 3-MC.

Immunoediting can be seen as a type of Darwinian theory of natural selection, where selective pressure comes from a direct attack by the immune system on a nascent tumor.

However, immune cells may lose this ability and transform from anti-tumor cells to immunosuppressive cells or even to tumor-promoting cells.

To do this, tumor cells perform a series of independent or sequential processes known as cancer immunoediting.

Thus, the processes that take place during the transition from an anti-tumor role to an immunosuppressive role are:

The elimination phase can be called the protective phase, as innate and adaptive immunity can clear the developing tumor during this phase.

If this process is unsuccessful, malignant cells may not be completely eradicated, but instead enter a phase of equilibrium.

This stage is the longest of the three, and it can last for several years. Surviving tumor cell variants (clinically undetectable) continue to expand under the watchful eye of the immune system.

Ultimately, this state of equilibrium between tumor cells and immune cells may be disrupted by tumor cells overcoming their immune surveillance, leading to so-called tumor immune escape.

This stage leads to tumor progression as other tumor cell variants, which are edited and less immunogenic, evade the immune system through direct and/or indirect mechanisms and begin to grow in an immune-unrestricted manner, leading to metastasis. Clinically detectable cancers often represent this escape stage.