People who drink alcohol regularly may have better quality of life?

New research shows that people who drink alcohol regularly may have better quality of life, due to happiness and stress reduction.

Reminder : This article only reports the latest research progress truthfully, and does not encourage drinking.

However, in August 2018, the leading international medical journal The Lancet published a large study of the burden of alcohol use in 195 countries and territories around the world. and a major risk factor for premature death, with nearly one in 10 deaths globally due to alcohol consumption.

The study concluded that the least harmful amount of alcohol consumed is not drinking at all .

In July 2021, The Lancet Oncology published a large study led by the World Health Organization’s International Agency for Research on Cancer (IARC) .

The large-scale studies mentioned above all point out that even moderate alcohol consumption is harmful to health .

However, a new study has found otherwise.

At the current European Congress of Anaesthesia, Vera Guttenthaler and Dr Maria Wittmann from the University of Bonn, Germany , report the results of a new study that found that older adults who drank regularly compared to their peers who abstained or consumed very low levels of alcohol.

People (aged 60 and older) had better quality of life in some areas, which the research team believes may be because higher alcohol consumption led to more positive emotions, enhanced social skills, and reduced stress.

In the study, the research team surveyed 628 elderly people aged 60 and older who underwent elective surgery at Bonn University Hospital between 2018-2019 to investigate the association between their preoperative alcohol consumption and postoperative quality of life .

The patients first reported their drinking habits, including the frequency of drinking, the amount of alcohol consumed per session, and whether there was heavy drinking using the Alcohol Use Disorder Recognition Test.

They also reported symptoms of mobility, self-care, activities of daily living, pain/discomfort, and anxiety/depression before and 180 days after surgery.

Overall, 186 of these patients (30%) had moderate to potentially dangerous unhealthy alcohol consumption, 138 of whom were men and 48 of whom were women.

The mean body mass index (BMI) was higher in the non-drinking or light drinking group than in the moderate to potentially dangerous drinking group (28Kg/m2 vs 27Kg/m2) , especially in female patients ( 29Kg/m2 vs 25Kg/m2 ) .

In addition, the moderate to potentially dangerous drinking group generally had higher levels of education.

The research team said this was an observational finding that assessed only patients undergoing surgery in one German hospital, so it is only possible to conclude that there is a correlation between alcohol consumption and quality of life, but it is still an exciting one. Research topics worthy of further exploration.

In fact, there are also some studies that also found that moderate drinking may have some health benefits. In November 2021, a research team from Monash University in Australia published in the European Journal of Preventive Cardiology entitled: Alcohol consumption and risks of cardiovascular disease and Large-scale research paper on all-cause mortality in healthy older adults .

The large-scale study of about 18,000 people looked at the effects of alcohol consumption on heart health and found that moderate alcohol consumption was associated with a lower risk of cardiovascular disease and lower mortality from all causes compared with never drinking. 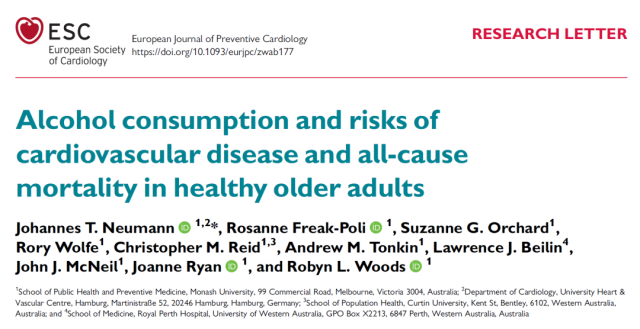 In July 2021, a study published in BMC Medicine by University College London Chengyi Ding et al also pointed out that drinking no more than 105 grams of alcohol per week may be associated with a lower risk of death in patients with heart attack, stroke, angina pectoris or cardiovascular disease. related.

Special reminder : This article only reports the latest research progress truthfully, and does not encourage drinking.