The Lancet: Sitting for 6 hours a day increases the risk of 12 chronic diseases

The Lancet: Sitting for 6 hours a day increases the risk of 12 chronic diseases. Sitting for a long time is more harmful to the body than you think!

Sitting is a very common behavior: sitting for meals, sitting for office work, and even sitting at home to watch TV on weekends … Ergonomic beanbags and beanbags have also emerged as the times require.

It aims to provide a more comfortable working experience for sedentary people such as white-collar workers and students. In a sense, sitting for a long time has become an indispensable way of life for human beings in the new century.

However, is it really good to sit for a long time?

As the saying goes, “The tailor takes the needle and thread, and the blood spurts out of his heart”, which means that sitting still for a long time will greatly affect the health of the body.

The veins dilate, causing uncomfortable symptoms such as hemorrhoids, muscle stiffness, backache and back pain. It has to be said that “sitting for a long time” has become a “gentle chronic killer”, unknowingly consuming human health.

Recently, researchers from Tianjin Medical University published a study in EClinical Medicine, a subsidiary of The Lancet , and found that sitting for more than 6 hours a day was associated with an increased risk of 12 common chronic diseases.

All participants were free of chronic non-communicable diseases at the start of the study and were followed up through 2020.

The researchers were surprised to find that only 11.8% of all participants were sedentary for ≤2 hours a day; nearly half of the people were sedentary for 4 hours or more a day—among them, 6 hours of sedentary a day More than 37% of the crowd (about one-third) !

Sedentary time and the proportion of the population. (Image credit: EClinicalMedicine)

Surprisingly, if the sedentary time of all participants was reduced to less than 6 hours per day, 3.7%-22.1% of chronic diseases could be effectively prevented. 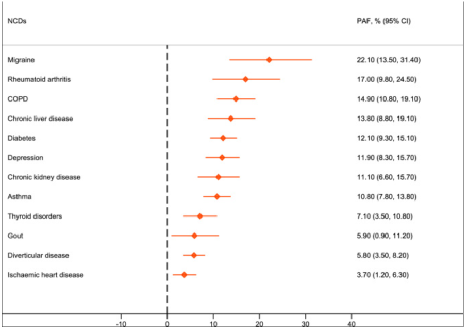 So, what can we do to ameliorate the harm of chronic disease from prolonged sitting? As the saying goes—“Exercise is the cure for everything”—the researchers made a detailed comparison of how different intensities of exercise improve the harms of prolonged sitting.

Interestingly, with the increase of exercise intensity, diabetes and chronic kidney disease were the most important.

The rate of avoidance of chronic diseases is gradually increasing. Specifically, replacing 1 hour of sedentary time with light exercise every day will reduce the risk of diabetes and chronic kidney disease by 2%-5%; and replacing sedentary time with vigorous exercise every day 1 hours, the risk of diabetes, chronic kidney disease, etc. will be reduced by 7%-19%!

It is worth noting that for participants who were sedentary for >6 hours a day, mild-intensity exercise had no significant beneficial effect on chronic disease risk, while moderate-intensity exercise only increased chronic obstructive pulmonary disease and dementia.

8% and 21% lower risk of the disease. Vigorous exercise was most beneficial for these participants, reducing the risk of diabetes, depression, chronic liver disease, diverticulosis, and sleep disorders by 11%-31%! 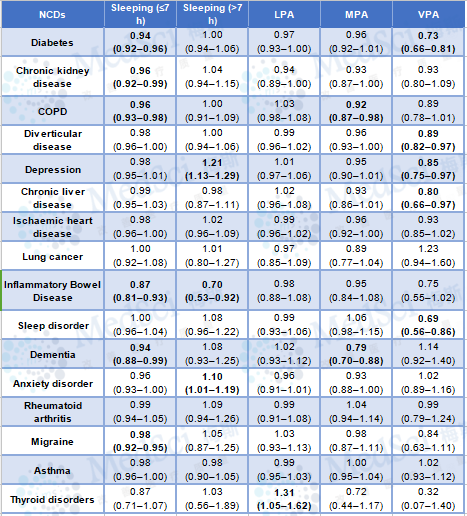 This inspires us that if we have to “996, 007” to stay at desks day and night for work, high-intensity exercise every day may be an effective way for workers to “save their lives”.

Maybe some friends will say, so is it not within the scope of “sedentary” if I lie in bed? In fact, according to the “WHO Code of Conduct for Physical Exercise and Sedentary” issued by the World Health Organization (WHO) , any behavior with a metabolic equivalent of less than 1.5Mets in a waking state is considered sedentary!

Definition of sedentary behaviour in the 2020 WHO Code of Conduct on Physical Activity and Sedentary. (Image credit: WHO)

It is often used to indicate exercise intensity and represents the amount of oxygen consumed per kilogram of body weight per minute.

That is to say, it is not just sitting and watching the computer, it is considered a sedentary behavior when you lie on the sofa or bed and use your mobile phone; even when you stand and work in order to protect your “old waist” and “think healthy”, you are still Belong to sedentary!

In view of this, WHO has developed detailed physical activity guidelines, calling on all adults , including those with chronic diseases or disabilities , to engage in at least 150 to 300 minutes of moderate to vigorous aerobic activity per week. Exercise intensity is also carefully differentiated according to metabolic equivalents .

Among them, the heart rate of moderate-intensity exercise is 130-150 beats per minute. During the activity, you can feel sweating, breathing is relatively short, and you feel a little tired, such as walking, jogging, cycling, Tai Chi, etc.; while the high-intensity exercise heart rate is every 160~170 times per minute, I feel sweaty and out of breath, including running, climbing, dancing, etc.

Finally, the editor sincerely calls on everyone to exercise and say “say Goodbye” to the risk of disease caused by sedentary~

The Lancet: Sitting for 6 hours a day increases the risk of 12 chronic diseases