The look back at new drugs approved by FDA in 2021

The look back at new drugs approved by FDA in 2021.

The FDA now approves twice as many drugs each year as it did 15 years ago, which is certainly a sign of scientific progress, but it is also a sign of the growing leniency of regulators, who have grown closer to industry.

Rapid approvals for new treatment options in their various forms are the new normal in regions of unmet need.

They account for about 70% of all approved new drugs. 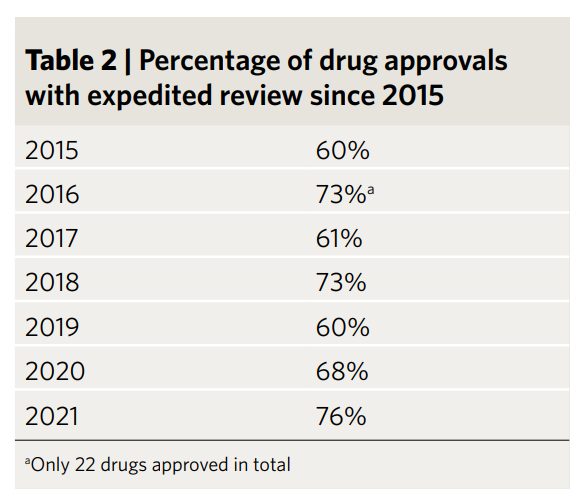 Oncology drugs once again dominated the expedited and routine approval lists, with 8 of the 20 cancer drug approvals being simultaneously submitted and reviewed in other countries through the FDA-coordinated Orbis program. 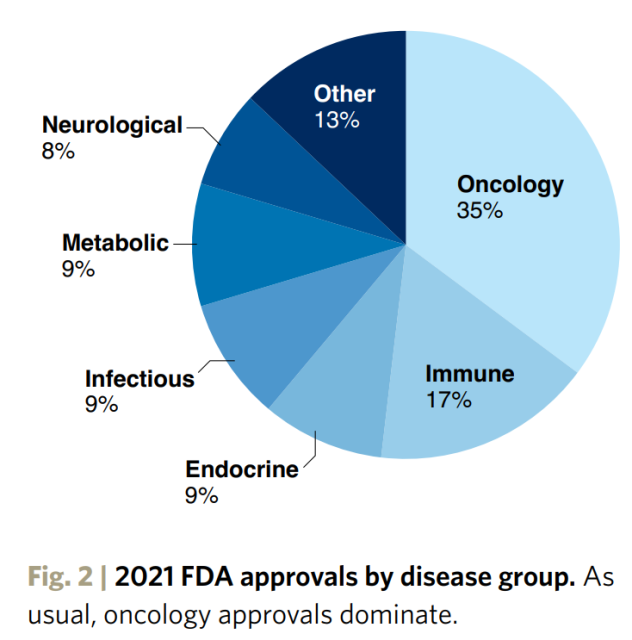 Many drugs are the “first”

The 2021 approvals are full of “first” that hit a new target or provide the first treatment option for a disease subtype or cancer mutation.

In the drug discovery world, one of the most exciting approvals has been for Amgen’s Lumakras ( sotorasib ), a small molecule capable of targeting previously thought untreatable targets.

Lumakras inhibits the G12C mutant of KRAS protein, a GTPase that switches between activated ( GTP-bound ) and inactive ( GDP-bound ) conformations and is associated with many cancers.

Lumakras prevents cell proliferation by covalently binding Cys12 residues near the inducible allosteric switch pocket on KRAS, locking it in an inactive state.

In 2021, the FDA approved Sarepta’s Amondys45 ( casimersen ), a phosphodiamidomorpholine antisense oligonucleotide that skips exon 45 in 8% of patients with dystrophin mutations.

The company’s two other DMD drugs previously approved, Exondys51 ( eteplirsen ) and Vyondys53 ( golodirsen ), for a small number of patients with deletions in exons 51 and 53, respectively, were also approved on an accelerated basis.

Research on complement system proteins and effectors is also deepening, which drives drug development for other inflammatory and immune-related diseases.

ChemoCentryx’s Tavneos ( avacopan ), a small molecule that selectively inhibits the complement factor 5a ( C5a ) receptor, is approved in the U.S. and Japan as a supplement to standard glucocorticoid therapy for the treatment of severe active antipsychotics neutrophil cytoplasmic autoantibody ( ANCA )-associated vasculitis, a rare inflammatory disease.

In November, another peptide drug, BioMarin’s Voxzogo ( vosoritide ), became the first approved to treat achondroplasia, the most common form of dwarfism . 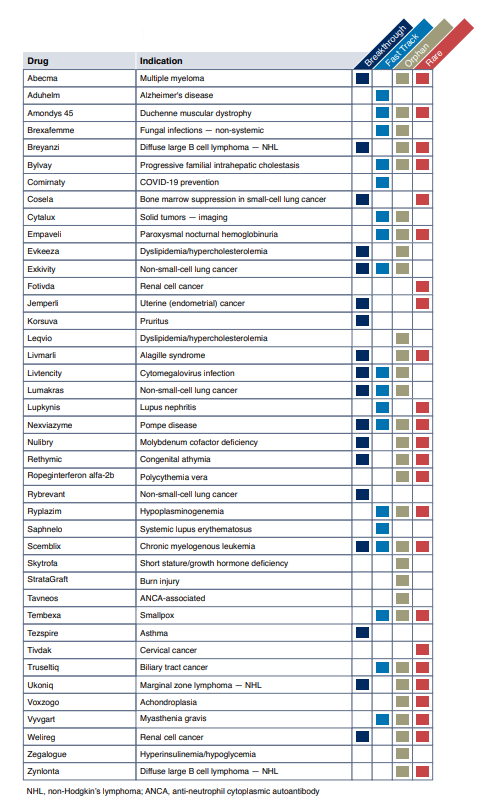 Both drugs are designated as interchangeable, meaning that the original drug prescription can be automatically filled with inexpensive biosimilars without the intervention of the prescribing physician.

In 2021, the third biosimilar from Samsung Biopis and Biogen, Byooviz ( ranibizumab nuna ), becomes the first biosimilar approved for ophthalmology in the US and EU, a generic version of Roche’s Lucentis drug for wet age-related macular degeneration .

dMMR mutations are believed to be present in approximately 14% of solid tumor cancers in the United States.

Jemperli, the seventh PD-1 blocker, was hit in late 2020 by delays in COVID-19-related field tests, but the drug still benefits from the fast-track typical in cancer treatment.

Antibody drugs such as Jemperli will account for one-fifth of total FDA approvals in 2021; biologics as a whole will account for less than 40% of those approvals. Innovators continue to complement their valuable antibody franchises with convenient antibody formulations and delivery mechanisms.

Antibodies continue to slowly expand into cardiovascular disease in 2021 with the approval of Regeneron’s Evkeeza ( evinacumab dgnb ) to treat homozygous familial hypercholesterolemia. Evkeeza is the first antibody to bind and block angiopoietin-like 3 ( Angplt3 ), which plays a role in lipid metabolism.

Meanwhile, antibody drug conjugates ( ADCs ) have come of age after a shaky history, with two more approvals in 2021 following a 2020 harvest. ADC Therapeutics’ Zynlonta ( loncastuximab tesirine ) became the tenth ADC in April and the first to target the cell surface antigen CD19 with a payload of pyrrolizumab for the treatment of diffuse large B-cell lymphoma. Seagen and Genmab’s Tivdak ( tisotumab-vedotin ) is the first tissue factor ( TF )-targeted ADC drug; it is approved for recurrent or metastatic cervical cancer.

Abecma was approved for relapsed or refractory multiple myeloma after at least four treatments, based on a single-arm study of 127 patients.

Add to that February approval of BMS’ Breyanzi ( lisocabtagene-Maraluecel ), which targets CD-19 for diffuse large B-cell lymphoma, and there are five CAR-T cell therapies approved in the U.S. in 2021.

Currently, CAR-T cell therapy benefits only a few hundred patients. Some developers are looking to reduce production time and improve the tolerability and convenience of next-generation therapies, including allogeneic CAR-T and CAR-NK cells. However, cost remains a significant barrier to widespread use of this therapy.

The look back at new drugs approved by FDA in 2021.