Vietnam’s Health Minister Nguyen Thanh Long and Hanoi Mayor Chu Ngoc Anh have been expelled from the party and public offices for allegedly colluding with Viet A Technology, a maker of COVID-19 test kits, to seek profit. 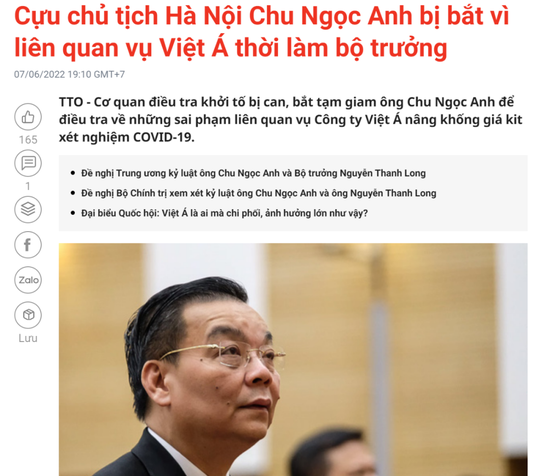 the Vietnamese National Assembly made the above announcement when it held a meeting on Tuesday (June 7).

Vietnam’s Ministry of Public Security also issued a statement on the same day, accusing Chu Ngoc Anh of “abusing his position and power in the performance of official duties” during his tenure as Minister of Science and Technology.

Nguyen Thanh Long was accused of “violating regulations on the management and use of state-owned assets, resulting in losses and waste.” Both have been arrested.

According to reports, in February 2020, the Vietnamese Ministry of Science and Technology, led by Chu Ngoc Anh, approved a project to develop a COVID-19 detection kit worth US$830,000, and medical technology company Viet A Technology successfully won the bid.

Viet A Technology announced that it has successfully developed a COVID-19 detection kit within one month after the project was approved, and it can be mass-produced. Vietnam’s Ministry of Health then quickly approved the test kit for nationwide use.

Viet A Technologies also claims that its test kits have obtained emergency use authorization from the World Health Organization. However, after the Vietnamese Ministry of Public Security officially intervened in the investigation in 2021, the WHO representative in Vietnam publicly confirmed that the relevant application had been rejected as early as 2020.

In addition, the Vietnamese health department is also suspected of conspiring with the local government in Hanoi to sell Viet A Technology’s nucleic acid testing kits to local hospitals at high prices, making profits of more than 4 trillion VND (about 175 million US dollars ). SGD).

According to statistics, as of the end of 2021, Vietnam has conducted a total of 73 million nucleic acid tests for COVID-19, with an estimated total cost of over US$1 billion, four times higher than the cost of vaccines in Vietnam.