Simply put, the feeling of pain is an early warning signal that the human body is injured or attacked by disease.

For example, when it is stimulated by sharp objects or heat, the pain will come and disappear quickly; but if it is a long-term continuous stimulation, it will Causes hypersensitivity to pain.

This process is known as “pain entanglement”, which leads to the development of clinical pain disorders known as chronic pain.

Chronic pain is a global problem that can be extremely debilitating for patients. According to relevant data, there are more than 300 million chronic pain patients in some countries, and the number is increasing at a rate of 10 million to 20 million per year. Pain has become the third largest health problem.

But until now, scientists haven’t fully understood why some people are susceptible to chronic pain, and the exact mechanisms that trigger it.

On June 14, 2022, researchers from Oxford University and other institutions published a research paper entitled: Sodium-calcium exchanger-3 regulates pain ”wind-up”: From human psychophysics to spinal mechanisms in Neuron , a sub-journal of Cell .

The study identifies a new and important mechanism of chronic pain in humans – deletion of the NCX3 gene amplifies pain signals in the spinal cord , and proposes an effective therapeutic strategy – increasing the level of NCX3 through an adeno-associated virus (AAV) vector can Reduce symptoms associated with chronic pain.

A number of previous studies have identified candidate genes associated with chronic pain, but they could not be replicated in subsequent tests.

In the new study, to understand the genetic basis of chronic pain, the researchers first recruited 1,061 healthy volunteers (a genetically diverse population) aged 18-45 in Colombia , 55% of whom were women.

The researchers applied repeated stimulation to their hair and forearm and recorded pain levels, then used GWAS to look for genetic clues to identify specific gene mutations that were more common in people who experienced pain frequently.

They noted a novel genome-wide association between variants at the SLC8A3 locus encoding sodium-calcium exchange protein 3 (NCX3) and total pain duration, and validated this finding in two additional population cohorts. 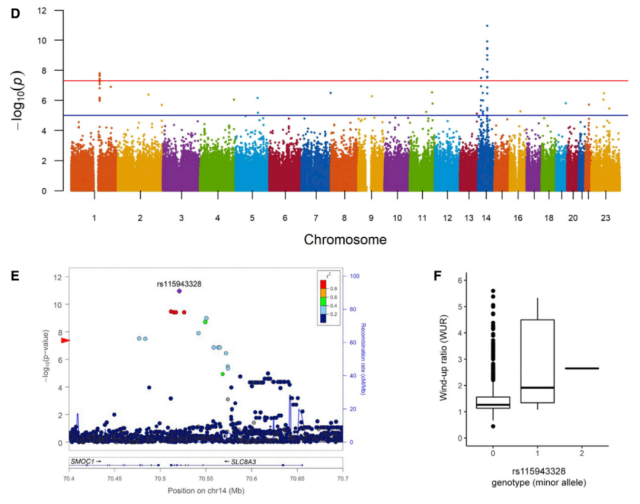 The researchers then conducted a series of confirmatory experiments in mouse models to explore the mechanisms by which NCX3 regulates pain winding and to determine whether it could be an effective therapeutic target.

The researchers found that in the mouse dorsal root ganglia, NCX3 is highly expressed in low-threshold mechanoreceptors and at lower levels in nociceptive afferents.

In the spinal cord, NCX3 is expressed in both excitatory and inhibitory spinal neurons, as well as in projection neurons of the anterolateral system.

These neurons are involved in nociceptive conduction, but they require NCX3 to export excess calcium, which is formed during subsequent activity.

In the absence of NCX3, spinal cord neurons exhibit increased intracellular calcium in response to nociceptive signals from the periphery, slower calcium clearance, and increased pain entanglement. Conversely, increasing levels of NCX3 in the spinal cord relieved pain in mice.

Finally, the researchers designed an adeno-associated virus (AAV) carrying the NCX3 splice variant B (NCX3-B) and injected the virus into spinal neurons of young mice to test the therapeutic potential of NCX3 as a target.

They observed that vaccination with the virus did not affect the animals’ responses to acute noxious stimuli, but significantly reduced prolonged pain behavior.

The study’s corresponding author, David Bennett , Professor of Neurology and Neurobiology at the Nuffield Department of Clinical Neurosciences at the University of Oxford, said this is the first time the pain response in humans has been studied and the mechanisms behind it have been tested directly in mice.

This provides very deep insights into understanding the genes involved and how to develop new treatments. This finding means that any drug that increases NCX3 activity could reduce pain sensitivity in humans.