The Human Immunodeficiency Virus (HIV) attacks the immune system, weakening the body’s defenses against many infections and some cancers that people with healthy immune systems could defeat.

The fact that cannot be ignored is that there is still no cure for HIV infection.

Therefore, there is an urgent need to develop effective HIV treatments.

In vitro transplantation of engineered B cells that secrete broadly neutralizing antibodies (bNAbs).

According to the latest research advances, this method, which can be used to produce anti-HIV antibodies, is a safe, effective and scalable method that could help develop an AIDS vaccine.

On June 9, 2022, Adi Barze’s team from Tel Aviv University published a research paper entitled In vivo engineered B cells secrete high titers of broadly neutralizing anti-HIV antibodies in mice in Nature biotechnology, claiming that they have found a new A unique and unique approach to AIDS treatment that involves engineering B cells in vivo using two adeno-associated viral vectors, one encoding Staphylococcus aureus Cas9 (saCas9) and the other encoding 3BNC117, an anti-HIV bNAb, which After intravenous injection into mice, high titers of broadly neutralizing antibodies (bNAbs) against HIV were produced. 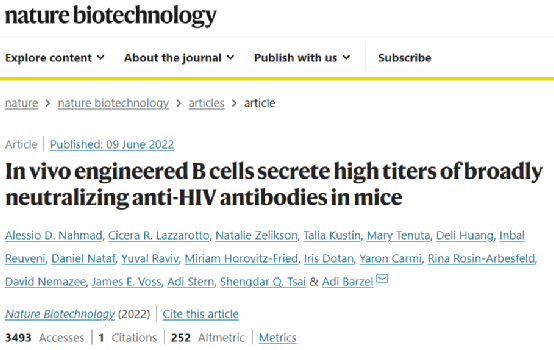 In the first set of experiments, saCas9 was expressed from the CMV promoter and a single guide RNA targeted saCas9 to the immunoglobulin heavy locus (IgH).

In turn, the bNAb was encoded as a bicistronic cassette under the control of an IgH enhancer-dependent promoter and flanked by homology arms with the desired saCas9 cleavage site within the JC intron of the IgH locus.

The bNAb cassette includes the entire variable segment (VH) of the light and heavy chains. The splice donor sequence follows the VH gene segment so that it is fused to the constant IgH exon, integrated into the locus and subsequently transcribed and spliced.

This design facilitates disruption of the endogenous IgH locus and initial bNAb expression as membrane BCRs, followed by activation of engineered B cells on antigen binding, leading to differentiation into memory cells and plasma cells.

After that, the engineered B cell vector was injected into mice intravenously, that is, the mice were immunized, and the titer of anti-HIV neutralizing antibodies in the body was detected.

It was found that the engineered B cells in vivo had high anti-HIV neutralizing antibody titers. 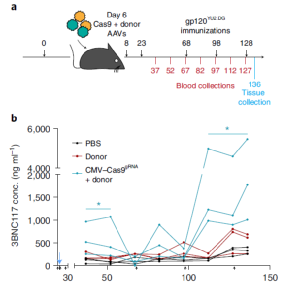 To assess possible off-target effects of the in vivo engineering approach, the copy number of neutralizing antibody genes was first quantified in various tissues.

On day 37, neutralizing antibody genes were found to have high copy numbers in the liver, and on day 136 levels were only reduced by a factor of 10.

AAV copy number increased significantly in bone marrow from day 37 to day 136, and a similar trend that was not significant was also detected in lymph nodes, suggesting that 3BNC117-expressing cells may have accumulated in these tissues.

The researchers then performed targeted sequencing of four potential off-target sites, as well as on-target sites, using gDNA from the liver and spleen of treated and negative control mice.

The trend toward higher mutation rates relative to control DNA from the spleen of untreated mice suggests that CRISPR-Cas9-induced double-strand DNA break repair is error-prone in the liver, but not in the spleen, and only targets IgH, while Not at any other detected off-target site.

This suggests that the rate of off-target cleavage by CRISPR–Cas9 is extremely low, while the generation of on-target cleavage in other tissues is reduced by expressing saCas9 from a B cell-specific promoter.

To better characterize the in vivo distribution and aggregation of different engineered cell populations, we next used a GFP-encoding donor vector along with the 3BNC117 cassette.

Recipient mice were immunized twice before analysis of GFP and/or 3BNC117 expression in bone marrow and spleen.

As expected, GFP+, 3BNC117+ cells were enriched in the spleen and bone marrow of mice receiving the donor and saCas9 vector.

Notably, in GFP-expressing B cells, co-injection of the saCas9 vector resulted in a significant increase in 3BNC117+, CD138+ plasmablasts in the spleen and bone marrow. 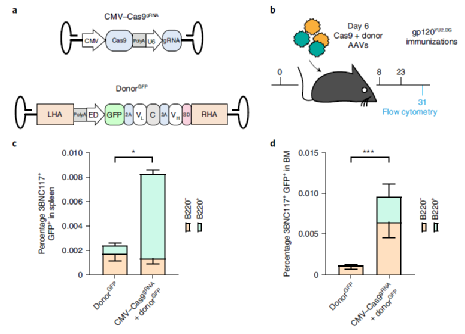 To further improve the safety of this method, we encoded saCas9 under the control of the B cell-specific promoter CD19.

That is, C57BL/6 mice were immunized with 20 μg HIV gp120, and 6 days later, each mouse was co-injected with a vector encoding saCas9, regulated by the CD19 promoter, and a second vector encoding bNAb and sgRNA. The mice then received up to six additional immunizations.

After four immunizations, up to 2 μg ml-1 of 3BNC117-neutralizing antibodies were already in the blood of treated mice.

A similar rate of 3BNC117-secreting cells could be detected in bone marrow using ELISPOT 45 days after the fourth immunization.

To assess possible effects on biodistribution and safety, 3 days after co-injection with the donor+sgRNA vector and a second vector encoding saCas9 under the control of a broad promoter or a B cell-specific CD19 promoter , mice were euthanized, and tissue analysis was performed.

However, the CD19 promoter significantly reduced saCas9 expression in liver but not in peripheral blood mononuclear cells.

Only when the CMV or SFFV promoter, rather than the CD19 promoter, was used to drive saCas9 expression, the rate of targeted cleavage in liver or spleen was significantly higher than background.

Therefore, isolating the encoding of saCas9 and sgRNA between two AAVs under a B-cell-specific promoter and expressing saCas9 reduced unwanted cleavage below the detection limit while presenting high 3BNC117 titers after immunization. 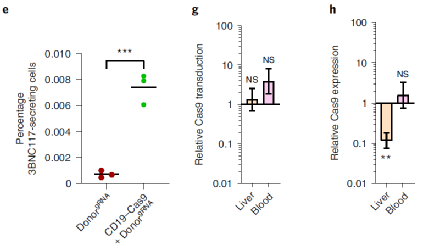 This research sheds light on the elusive HIV treatment. By engineering B cells to secrete high titers of broadly neutralizing anti-HIV antibodies in vivo, CRISPR–Cas9 off-target cleavage is extremely low, and on-target cleavage in unwanted tissues is reduced.

Looking forward to the future, B cell engineering can be used in clinical practice, benefiting millions of AIDS patients.