In cervical cancer, which is almost always caused by human papillomavirus (HPV) , the widespread availability of the HPV vaccine has reduced the prevalence of HPV infection by 86% among adolescent girls and young adult women since the vaccine became available in the United States . 71% .

Now, endometriosis drugs are also approved for the market (Orilissa) , which can greatly relieve the pain conditions of patients with this type of disease.

While great strides have been made, women face unique health challenges throughout their lives.

Women are more likely than men to be diagnosed with certain diseases , such as autoimmune diseases, depression, osteoporosis, Alzheimer’s disease , etc.

Nearly 40 percent of women will be diagnosed with a chronic disease, compared with 30 percent of men .

Additionally, women can also be misdiagnosed due to gender bias in healthcare, which ultimately delays appropriate care and treatment. Minority patients in developed countries such as the United States may face additional challenges due to racial disparities in health care.

Reassuringly, PhRMA recently released a report showing that in response to these challenges, biopharmaceutical research companies are developing 625 drugs for diseases that disproportionately or only affect women. 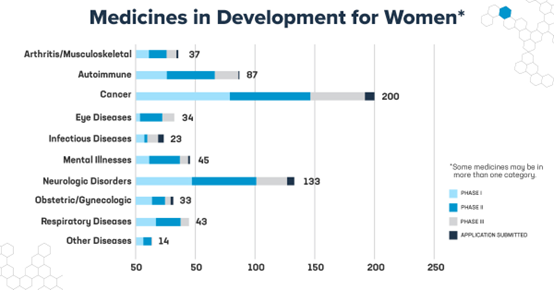