BA.4/5 Infection soared 60% in a week in US: The strongest immune escape in history

BA.4/5 Infection soared 60% in a week in US: The strongest immune escape in history.

According to the latest data released by the U.S. Centers for Disease Control and Prevention (CDC) on June 21,  the new variant of Omicron BA.4/5 has accounted for 34.9% of the new cases in the United States in the week of June 18, a surge of 61.57% from the previous week.

BA.4/5 is the new coronavirus variant with the strongest immune evasion ability so far. 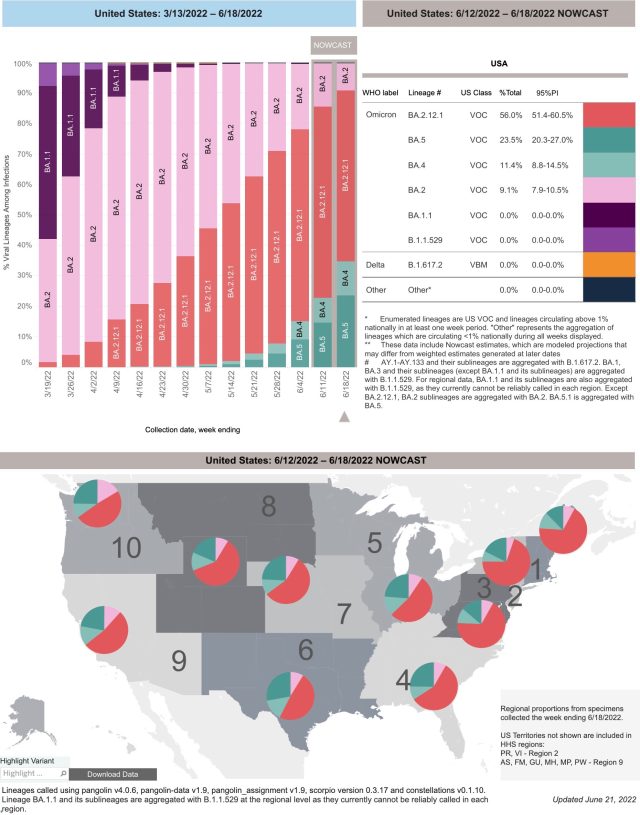 What is even more worrying is that BA.4/5 can also replicate efficiently in human alveolar epithelial cells, while Omicron BA.1 and BA.2 were previously replicated mainly in the upper respiratory tract.

The United States just experienced the Omicron epidemic tsunami from last winter to this spring. The first half was BA.1, and the second half was BA.2.

However, the infection of a large number of people and the high level of immunity of the population brought about by vaccination cannot stop BA.2.12.1 from making waves again.

BA.2.12.1, BA.4, BA.5 mutations at the L452 site of the spike protein are the spikes that the Omicron BA.1 and BA.2 sub-variants do not have, but the delta variant has. protein mutation sites.

This means that under strong positive selection pressure, the Omicron variant has convergent evolution with the delta strain on the spike protein gene.

The pathogenicity study of BA.4/5 was previously published on the medical preprint website bioRxiv by 27 research institutes including the University of Tokyo, Kyoto University, Hokkaido University, Kyushu University, Kobe University, and Israel’s Weizmann Institute of Science.

In order to test the replication ability of many mutant strains of Omicron in human alveolar epithelial cells, the research team prepared a chimeric recombinant SARS-CoV-2 virus with L452R mutation through reverse genetics.

The experiments showed that BA.4, The plaques formed by BA.5 infection of human alveolar epithelial cells were larger than those formed by BA.2 infection.

The researchers also found through experiments that BA.4 and BA.5 were much more efficient than BA.2 in replicating human iPSC-derived alveolar epithelial cells.

Under the wave of infections in BA.4 and BA.5, the U.S. aviation industry is in chaos due to frequent recruitment of crew members, and a large number of flights have been cancelled.

Combined with the Friday and Saturday of the previous day, about 14,000 U.S. inbound, outbound and domestic flights were canceled or delayed.

This time, the Hartsfield-Jackson Airport in Atlanta, the hardest hit area of ​​BA.4/5, was particularly affected.

A large number of passengers were stranded at airports over the weekend as Delta canceled or changed dozens of scheduled flights.

The huge base of COVID-19 infections overseas provides a steady stream of opportunities for mutation, so new mutant strains emerge one after another like a wave: strains with stronger immune evasion ability and stronger transmission ability emerge.

The harm of repeated infection with the COVID-19 has attracted the attention of the academic community.

By studying a large sample of 5.69 million people, they found that reinfected people showed an increased risk of all-cause mortality, hospitalization and many diseases compared with those who were first infected with the COVID-19.

And with each infection, that risk increases dramatically. The risk was significantly increased in people who were unvaccinated or who had one or two or more shots before a second infection.

And the so-called mutants with stronger transmission ability are less virulent and untenable.

A review in the May issue of the international authoritative academic journal “Nature Reviews Microbiology” pointed out that it is only a coincidence that the patients with Omicron variant infection have lower disease severity.

The antigenic evolution of the new coronavirus is continuous and rapid, which allows an endless stream of new virus variants to enhance the severity of infection by evading immunity.

The authors of this review are Peter V. Markov of the European Commission’s Joint Research Centre (JRC), Prof. Aris Katzourakis of the Department of Zoology, University of Oxford and the European Commission’s Joint Research Centre, Biometrics and Epidemiology, Erlangen-Nuremberg University Department of Nikolaos I. Stilianakis.

His research mainly focuses on the long-term evolutionary biology of viruses. He found abundant genome “fossil records” of ancient virus sequences in the host genome, which promoted the development of this research. , thus giving birth to the emerging field of paleovirology. Prof. Katzourakis also studies the evolution and epidemiology of today’s viral pathogens (eg HIV/HTLV), as well as evolutionary inference from animal and viral genome sequence data.

They wrote in this review article: The new coronavirus (SARS-CoV-2) has strong infectivity, rapid immune decline after infection, antigenic evolution, and a series of potential animal hosts, which makes the new coronavirus able to spread in human society. keep spreading.

From the perspective of disease prevention and control, a key issue is to predict the epidemiological characteristics, clinical parameters, and disease burden to human society of 2019-nCoV.

Compared to the delta variant, also defined by the WHO as a “variant of concern (VOC)”, the Omicron variant produces relatively mild symptoms.

The authors note that this has reignited all kinds of wishful thinking about the epidemic and evolution of the virus: such as new mutant strains that are “harmless” epidemics; mass vaccination and general immunity from infection will make the epidemic worse. The wave becomes safe; the virus promises a benign evolution.

One of the most widespread and persistent misconceptions, they say, is that viruses evolve to be less lethal to protect their hosts.

In fact, viruses have been under strong evolutionary pressures that affect their immune evasion and transmission capabilities, and virus virulence is often just a by-product of this process.

According to the article, the virulence of the virus is formed by the complex interaction between various factors in the host and pathogen.

Viruses evolve in the direction of maximizing their ability to transmit, which, contrary to popular belief, can sometimes be precisely associated with higher virulence, e.g., higher viral loads can both facilitate transmission and increase disease severity . If so, the virus may have evolved into a more virulent strain.

And if the severity of the strain is only manifested in the late stage of infection, that is, after the typical transmission window, then the role of virulence in virus adaptation is limited, and virulence will not be the key to the survival of the fittest.

There are many viruses like this that have severe symptoms after the transmission window, such as new coronavirus, influenza virus, HIV, hepatitis C virus, etc.

That is to say, predicting the evolution of virus virulence is actually a complex task, and the lower severity of the Omicron variant is just a coincidence, making it difficult to predict future variant strains

. The authors also point out that, unfortunately, the more likely evolutionary path for SARS-CoV-2 in the future is highly dependent on a potentially catastrophic combination of reinfection ability and high virulence brought about by immune escape.

The authors also make the point that another common and naive belief is that widespread vaccination or immunity induced by a large number of infections in the population can guarantee that future infections with new strains of the new coronavirus will show only mild symptoms.

However, this idea ignores a core feature of 2019-nCoV biology—antigenic evolution, the continuous modification of the viral antigenic spectrum in response to host immune stress.

High rates of antigenic evolution can lead to immune escape, in which new mutant strains reduce the ability of the immune system to respond, leading to reinfection and subsequent potentially severe disease. At the population level, antigen evolution and escape can increase the burden on healthcare resources by increasing the rate of reinfection and severe illness.

The Omicron strain clearly demonstrates that SARS-CoV-2 is capable of producing a large number of mutations to achieve antigenic escape in a relatively short period of time.

Compared with the original strain, the Omicron strain has at least 50 amino acid mutations, and has a high degree of antigenic difference from the early alpha, beta, gamma, delta and other popular strains.

The tsunami of transmission caused by Omicron in hyperimmune populations suggests that these mutations allow the variant to easily infect individuals who are immune from previous infection or vaccination.

Genetic differences between the various sub-lineages under Omicron are also considerable, and the functional importance of this difference is being demonstrated by the large spread of the Omicron BA.2 strain.

The authors recall that in September 2020, after an initial period of relative evolutionary stability, variants with considerable antigenic differences from the original SARS-CoV-2 strain began to emerge. At least three of the earlier VOCs—beta, gamma, and delta—have strong signatures of immune escape mutations.

There is currently no indication that the antigenic evolution of the new coronavirus will slow down in the future.

Instead, these “variant variants of concern (VOC)” are just the tip of the “evolutionary iceberg.” Over time, hundreds of new coronavirus sub-lineages continue to diverge from each other.

According to evolutionary theory, the chance of new coronavirus immune escape mutation will be greatly increased in the future.

The fitness of the virus can be reflected by its effective reproduction number (Rt). Rt is the total number of secondary infections resulting from infected cases in the population.

Therefore, the most adaptable mutant is the one that spreads to the most hosts.

In populations where everyone is susceptible, the virus can do this by becoming more contagious. That’s how early “variants of concern (VOC)” evolved: Alpha and Delta were both about 50 percent more infectious than the previous dominant strain. Each VOC rapidly displaces the other in a pandemic dominated by a large infected population.

They also point out, however, that in highly immune populations, merely increasing intrinsic infectivity contributes relatively little to the expansion of transmission, because in this case the main factor impeding transmission is the host’s immunity to infection. Therefore, as humans transition to high levels of immunity, SARS-CoV-2 is expected to increasingly optimize its transmissibility (Rt) by enhancing its ability to re-infect immune individuals, rather than optimizing its transmissibility (Rt) by being highly contagious.

Thus, increased levels of immunity may accelerate the rate of antigenic evolution of the virus, thereby increasing the risk of reinfection, and possibly the disease severity of reinfection. Indeed, Omicron’s rapid spread, thanks to its extraordinary ability to re-infect immune individuals, exemplifies this evolutionary strategy.

BA.4/5 Infection soared 60% in a week in US: The strongest immune escape in history