Researchers can now use data from a common bone density scan to assess a person’s risk of developing dementia later in life.

Calcification within the abdominal aorta doubles a person’s risk of developing dementia after age 80, the long-term study shows.

The project’s initial focus was to understand how calcium supplementation could prevent osteoporotic fractures, but it includes well over 10 years of valuable follow-up health data.

A team from Edith Cowan University in Australia re-examined the study’s data, assuming that certain biomarkers collected from bone density scans could be used to predict the onset of dementia 15 years later.

The study focused on a biomarker called abdominal aortic calcification (AAC), which is the buildup of calcium in the body’s largest artery. Currently, AAC is used to predict a person’s risk of cardiovascular disease and stroke.

Researchers looked at the health records of nearly 1,000 women and found that those who had moderate to high AAC in their 70s were twice as likely to be hospitalized or die from dementia over the next 15 years.

One of the study’s authors, Joshua Lewis, said bone density scans were a very common test for older people, with more than half a million performed each year in Australia alone.

The widespread availability of these machines means these tests can easily be incorporated into current health screening programmes. 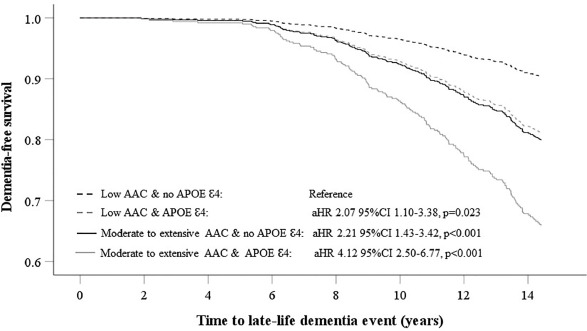 Lewis said: “In general, capturing these scans is very quick and easy, and they are less invasive, cheaper and have less radiation than X-ray or CT scans.

This means these scans may is an inexpensive, fast and safe way to screen large numbers of vulnerable older Australians for dementia risk in later life.”

The study also showed that there is a clear overlapping relationship between cardiovascular health and brain health.

Simon Laws, another researcher working on the project, said identifying AAC as a risk factor for dementia in later life opens the door to lifestyle and dietary interventions that could help prevent cognitive decline in people in their 80s.

“In dementia research, there’s an adage that what’s good for your heart is also good for your brain,” Laws said. “What’s now found is the importance of changing risk factors such as diet and physical activity in preventing dementia: you Early intervention is needed, and hopefully this research will change early and have the greatest impact.”

More research will be needed to better understand the mechanisms that may be involved in AAC and dementia in later life. It is unclear whether this correlation is as strong for men as it is for women.

In the short term, however, the findings offer doctors and patients a new way to use data from ordinary bone scans to assess a person’s risk of developing dementia in subsequent years.

The new study was published in the journal The Lancet-Regional Health .