BA.4 and BA.5 are setting off a wave of infections around the world, and the new generation of variants brings hidden worries.

Just as Europe and the United States are facing another wave of infections caused by BA.4 and BA.5, the new generation of variants evolved by Omicron strikes again.

The new variant, first spotted in India in early June, has yet to be officially named, with some calling it BA.2.75, and researchers calling it Centaurus (Sagittarius) as the codename.

The Omicron variant, BA.2, is the original strain, which the researchers called the “second-generation” variant. Besides India, it is also found in Japan, Germany, UK, Canada, USA, Australia and New Zealand.

Compared with BA.2, BA.2.75 has 8 spike protein mutations. The location of these mutations led scientists to worry that it could evade the immunity built by BA.2. 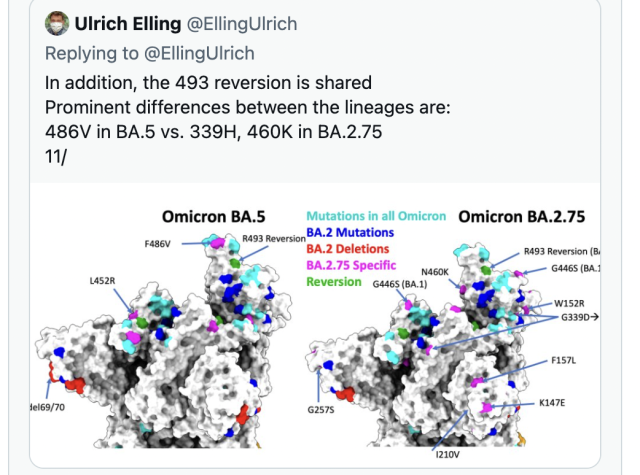 On July 6, WHO Director-General Tedros Adhanom Ghebreyesus stated at a press conference that BA.2.75 is being closely monitored.

WHO experts have hinted that BA.2.75 looks different from previous variants, but also stressed that it is too early to judge its severity.

A day earlier, WHO chief scientist Soumya Swaminathan said on social media that about 10 countries had reported BA.2.75, but it had not yet been declared a worrying variant. Its transmissibility, degree of pathogenicity and potential for immune evasion are currently unknown.

But many experts have expressed concerns. Ulrich Elling, a geneticist and molecular biologist at the Austrian Academy of Sciences, told DW that data on this variant is sparse so far, with only about 70 documented cases of BA.2.75 worldwide.

But he also pointed out that testing in many countries has been significantly reduced, and he believes that the number of unreported cases may now be on the rise.

According to India’s livemint news network, 85 BA.2.75 cases have been reported so far in 8 countries, including India. As of July 6, 10 Indian states have reported finding BA.2.75, including Delhi and Maharashtra.

According to the results of the sequencing of Indian infection strains by the Global Avian Influenza Gene Sharing Database (GISAID), BA.2.75 had accounted for 23% of Indian samples in early July.

Erling of the aforementioned Austrian Academy of Sciences emphasized that so far, experts do not have any definite understanding of BA.2.75.

However, considering that India has already experienced a wave of BA.2 infections, the fact that BA.2.75 is able to spread in multiple parts of India seems to be a sign of its stronger immune evasion.

In fact, with so little information at hand, scientists can only speculate on the trajectory of BA.2.75. “It looks like something is coming our way, but there’s no definitive evidence yet,” Erin said.

Although the appearance of BA.2.75 is still vague, it is an indisputable fact that BA.4 and BA.5 are setting off a wave of infections in Europe and the United States.

On July 6, WHO Director-General Tedros Adhanom Ghebreyesus pointed out that in European and American countries, BA.4 and BA.5 are causing a new wave of epidemics.

Globally reported cases of Covid-19 have risen by nearly 30% in the past two weeks; last week, four of the WHO’s six subregions saw an increase in cases.

Considering that many countries in Europe and the United States have cancelled testing, the real infection rate may far exceed the above figures.

BA.5 is dominating the US. BA.5 caused nearly 54% of new infections in the United States last week, according to the CDC.

BA.5 has also landed in China. On July 5, BA.5.2 was detected in Xi’an. On the 6th, the Beijing COVID-19 Epidemic Prevention and Control Conference announced that the genetic sequencing of the samples of the three infected persons reported the day before showed that the virus belonged to BA. 5.2.

This spring, BA.5 swept South Africa along with the twin variant BA.4, both of which have the ability to evade immunity built up by previous infection and vaccination.

A recent study in South Africa found that neutralizing antibodies in people who had previously been infected with Omicron but were not vaccinated decreased nearly 8-fold when faced with BA.4 and BA.5.

People who were both infected with Omicron and vaccinated had a 3-fold drop in antibodies.

Eric Topol, director of the Scripps Research Translational Institute, said last week that BA.5 is the worst version of the virus we’ve ever seen, taking an already high level of immune escape to a new level , enhances the spread far beyond what has been seen before.

BA.4 and BA.5 are almost six times more contagious than the original strain of Covid-19, similar to measles, the study said. In addition to the faster spread and higher viral load, many experts said in interviews with the media that compared with previous variants of Omicron, BA.5 has invaded the lower respiratory tract such as the lungs and has strong immune escape. The new situation of ability.

Tedros said at a press conference on the 6th that multiple factors have made the epidemic challenge more complicated.

The dramatic reduction in testing in many countries, for example, obscures the true picture of the evolving virus and the true burden of the global Covid-19 pandemic.

In addition, new oral antiviral drugs are difficult to obtain, and new treatments are still not reaching low- and lower-middle-income countries.

In addition to this, the vaccine is less potent, and as the virus continues to develop, the protective effect of the vaccine does weaken, which highlights the importance of booster shots.

Tedros called for adherence to epidemic prevention measures, especially where cases are on the rise. It is also necessary to accelerate the development of next-generation vaccines, tests and therapeutic tools.

“We are still in the midst of a pandemic, and the virus still has a lot of power,” said Abdi Mahamud, WHO’s COVID-19 event director. Whether it is BA.4, BA.5 or BA.2.75, the virus will continue to exist.