The use of radionuclide-carrying monoclonal antibodies in cancer therapy ( diagnosis and therapy ) has been under clinical investigation over the past decade, with an increasing number of radioactive species with different properties ( half-life, emission spectrum, particle or electron ) Nuclides are evaluated.

However, so far, the selection of RIT radionuclides in clinical trials has been limited to I-131, Y-90, Lu-177 and Re-188, Bi-213 and At-211. In addition, the FDA has only approved two radioimmunotherapy ( RIT ) for the targeted treatment of hematological tumors expressing the CD20 antigen.

RIT still faces many challenges, and accurate dosimetry is crucial for RIT; in addition to the inherent properties of radionuclides, antibody properties also have an important impact on the induction of different therapeutic effects by RIT.

In addition, RIT applications in solid cancers face major problems, such as radiotoxicity due to the permeability of antibodies, requiring large therapeutic doses, and new discoveries in antibody engineering and radionuclides are trying to overcome these problems, and RIT is gradually showing good application prospects. 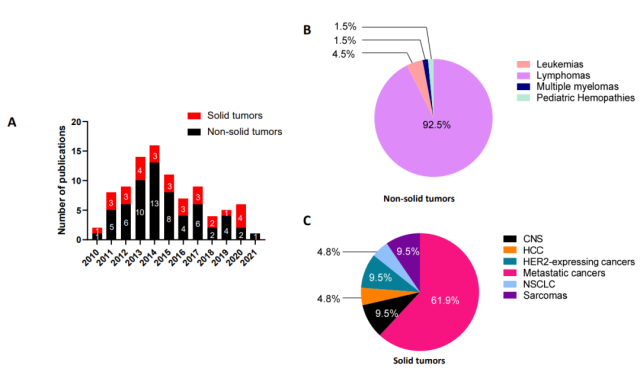 In contrast, RIT for solid tumors was assessed on a wider variety of targets and tumors, with metastatic cancer accounting for 61.9% of all studies.

Both are initially indicated for the treatment of patients with relapsed or refractory ( R/R ), low-grade or follicular B-cell non-Hodgkin lymphoma ( B-NHL ), including rituximab-refractory Patients with vesicular NHL.

After the approval of these two drugs, a large number of clinical studies of RIT were carried out.

In the first-line treatment of advanced FL, 90 Y -ibritumomab tiuxetan and 131 I -rituximab have demonstrated efficacy and are well tolerated. In FL, a second-stage evaluation of a first-line consolidation regimen using 90 Y -ibritumomabtiuxetan showed promising results, with a clear advantage in progression-free survival ( PFS ) compared to a consolidation-free strategy.

However, a phase III first-line consolidation study with 131 I -tositumomab failed to demonstrate clinical benefit.

Regarding R/R FL, the safety and efficacy of 90 Y -ibritumomab tiuxetan have been demonstrated in phase I studies. The phase III trial assessed RIT with 131 I -tositumomab, however, the trial was terminated early because only 14 patients were included and thus failed to draw important conclusions.

Studies evaluating anti-CD20RIT in aggressive B-NHL, including transformed low-grade B-NHL, DLBCL, and MCL, showed that it was well tolerated.

A significant benefit in survival was highlighted in most studies, regardless of the type of aggressive B-NHL.

However, in one study in MCL, no significant improvement in survival was shown compared with a regimen involving rituximab.

Despite these promising results, a phase III clinical trial of 131 I -tositumomab compared with BEAM or rituximab in patients with chemotherapy-sensitive relapsed DLBCL did not show any difference in PFS or OS.

Despite improvements in both radionuclide and RIT procedures, RIT therapy for solid tumors remains fairly limited.

Most of them only assessed the feasibility and toxicity of RIT, making it difficult to clearly determine the therapeutic effect of RIT.

Most clinical trial reports on RIT in solid tumors involve a limited number of patients who are already metastatic and resistant to first- or second-line therapy.

RIT in hematological tumors has primarily focused on four different antigenic targets ( i.e., CD20, CD22, CD33, and CD66 ), and so far, RIT in solid tumors has tested 12 different antigens, each of which is evaluated only once or in clinical trials. twice, thus making it difficult to compare different studies to determine whether RIT is effective.

One reason RIT is difficult to successfully treat solid tumors is that it relies on penetration and lower doses of intact monoclonal antibodies.

However, tumor vasculature is leaky and the presence of a highly complex extracellular matrix prevents tumor cells from accessing mAbs.

Alternatives and prospects for traditional RIT

The long IgG half-life is a major disadvantage of RIT therapy in solid tumors due to hematological toxicity and drug resistance due to slow penetration of monoclonal antibodies.

Currently, two main strategies have been explored to circumvent these problems, both of which are based on improving the pharmacokinetics of radionuclide-carrying carriers.

Fab’ was clinically approved by the FDA as early as 1994 to prevent thrombosis during angioplasty ( ReoPro® ).

To date, the FDA, EMA, and China have also approved several Fab’ fragment drugs, including for cancer therapy, such as Ranibizumab. However, so far, no RIT has been approved.

However, it failed to show significant uptake by the tumor compared to other organs. In addition, aggregation was observed in three patients, which correlated with the amount of CEA antigen measured in the patient serum.

Notably, Fab’ fragments also showed some diagnostic potential. For example, the 99mTc -nofetumimab-merpentan Fab’ fragment ( Verluma® ), which targets pancreatic cancer antigens expressed by cancer cells , was approved by the FDA in 1992 for the diagnosis of small cell lung cancer, but was discontinued in 2013.

In 2011, Anascorp® became the first FDA-approved F(ab’) 2 for the treatment of clinical symptoms of scorpion poisoning.

Subsequently, the FDA approved Anavip® in 2015 for the treatment of the clotting effects of North American spotted viper poisoning.

Regarding RIT, F(ab’) 2 is the most common fragment type evaluated in clinical trials. But since 2010, only two are still being studied, CD147 for metastatic solid tumors and tenascin C for Hodgkin lymphoma.

With the exception of CD147, targeted therapies for tenascin C and CEA are still in early clinical evaluation (phase I/II ), involving only a small number of patients. In most cases, conventional I-131 radiolabeling is used.

RIT with metuximab was associated with mild to moderate hematologic/hepatic toxicity, all ≤ grade 3; in addition, there was no impairment of thyroid function and no apparent human anti-mouse antibody ( HAMA ) positivity after two cycles of treatment .

In the most recent study, the median OS was between 20 and 60 months, and the 5-year PFS was approximately 43.4% in the treatment group compared with 21.7% in the control group.

In RIT clinical trials, the only study describing the use of a radiolabeled scFv was a phase I trial in 2011 using the 131I – CIGB -M3 trivalent scFv, targeting CEA.

There were lower off-target toxicities and lower HAMA responses in 17 patients evaluated. Despite showing promising pharmacokinetic results and dosimetry, it has not been in clinical development to date.

Another potential strategy to improve clearance and reduce off-target toxicity is to delay the administration of radionuclides in monoclonal antibodies by so-called pretargeting methods, by hours to days.

This method begins by administering an intact antibody or fragment conjugate that is sufficiently bound to the target, usually hours to days before administration of the radioactive component, to allow time to accumulate in the tumor, the radioligand and the monoclonal antibody conjugate having Highly specific payloads are associated.

To obtain a fast reaction, high affinity between the two ligands is required. Due to the small size of the radioligand, rapid biodistribution in blood, and short half-life, PRIT has low off-target toxicity to healthy tissue.

Over the past 30 years, different PRIT strategies have been developed. The oldest strategy involves high affinity between biotin and streptavidin.

Another PRIT strategy based on bispecific or multispecific antibodies or fragments was quickly developed.

In 2012, a phase II study was conducted on a chimeric bispecific human/mouse ( hMN-14×m734 ) F(ab′) 2 , an anti-CEA×antibody labeled with I-131. DTPA, for the treatment of patients with medullary thyroid cancer.

The dosing delay between bsAbs and 131 I -DTPA was 4 to 6 days, and the results showed that PRIT was well tolerated in most patients, in addition, the efficacy of PRIT was demonstrated to control disease in 76% of patients, and the median PFS was 13.6 months, and the median OS was 43.9 months.

Although the FDA has approved two RIT drugs, the past decade has failed to expand the indications for anti-CD20 RIT, and clinical trials of RIT have declined year by year, and interest in this therapeutic strategy for hematological malignancies is declining.

Furthermore, in solid tumors, there are currently no FDA- or EMA-validated RITs.

However, it is worth noting that the number of RITs in solid tumors has increased significantly, reaching a recent peak and accounting for more than 50% of ongoing RIT clinical trials.

The combination of a large number of newly discovered targets/antibodies with potent radionuclides indicates that RIT has a new application prospect in solid tumors, especially metastatic malignant tumors.

In addition, recent advances in antibody fragment bioconjugation and pretargeting strategies hold promise for improving RIT efficacy and expanding solid tumor applications over the next decade.