MicroRNA methylation may serve as a powerful biomarker for cancer development

MicroRNA methylation may serve as a powerful biomarker for cancer development.

In a research report published in the international journal Nature Communications: Scientists from Osaka University have discovered a new way to distinguish early-stage pancreatic cancer patients from healthy people through research, which may help develop new methods for early diagnosis of pancreatic cancer .

Molecular levels related to genetic function, such as microRNAs, are key indicators of abnormal cancer-related activity, yet researchers are currently not sure how different molecules are altered in cancer cells. 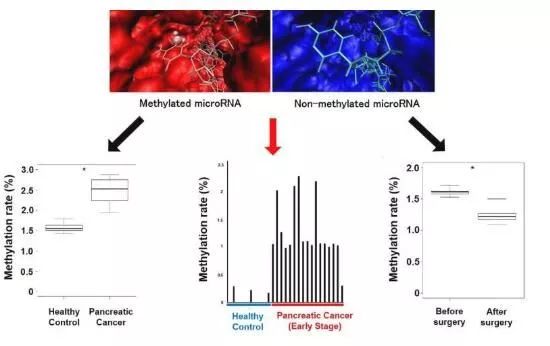 The researchers said that the ratio of microRNA methylation can effectively distinguish cancer patients from healthy individuals;

microRNAs can show abnormal expression in cancer tissues, and they are also relatively stable in body fluids, so they can be used as indicators of cancer. useful biomarkers;

although researchers can measure microRNAs in terms of RNA expression levels, techniques lack sensitivity and accuracy, especially although microRNA measurements are based on the assumption that whether or not they are methylated, their Both can recognize and regulate targets, but in fact their roles will change with different methylation states, so researchers want to solve this problem through research.

“We found that a small group of microRNAs are methylated, which may potentially alter their stability and target recognition, so we wanted to investigate whether methylation could act as an abnormal microRNA,” says researcher Masamitsu Konno.

Serum samples from healthy individuals were analyzed to measure the level of microRNA methylation in the samples.

Researchers found methylated microRNAs in samples from pancreatic cancer patients, while control healthy individuals were either at low levels or absent;

methylation levels in serum samples may be effective in distinguishing early-stage pancreatic cancer patients from controls individuals with high sensitivity and specificity.

Compared to established biomarkers, microRNA methylation may be a powerful indicator of early pancreatic cancer.

Our findings suggest that levels of microRNA methylation may be more useful than microRNAs as biomarkers for gastrointestinal tumors, and elucidating the molecular mechanisms by which methylation processes regulate microRNA function in different stages of cancer may help develop novel cancer targets Sexual therapy to improve outcomes for cancer patients.

Finally, the researchers said that because the early diagnosis and treatment of cancer can have a substantial impact on the prognosis of patients, early screening of cancer is crucial.

Given the advantages of existing cancer biomarkers, RNA methylation may be able to As an important component in the future cancer early diagnosis system.

MicroRNA methylation may serve as a powerful biomarker for cancer development.