Decompose 70% alcohol in 60 minutes! Claimed to be the first truly effective hangover drug on the market, will you buy it?

In many countries, the unique bar culture of Europe and the United States has endured for a long time.

When you come to Europe and the United States (especially the United Kingdom), you can’t help but go to a bar. It is a good place for casual chats or gatherings between friends.

Bars have become an indispensable part of life in the West (especially the British).

Even so, “drinking harms the body” has long been a consensus.

In recent years, more and more scientific evidence has revealed the harm of alcohol to the human body.

The metabolism of alcohol in the body takes place mainly in the liver. After being absorbed through the gastrointestinal tract, the alcohol enters the blood circulation, and after reaching the liver, it is metabolized in two steps by alcohol dehydrogenase (ADH) and aldehyde dehydrogenase (ALDH).

In the first step, alcohol is oxidized to acetaldehyde under the catalysis of ADH1. Acetaldehyde is toxic and can cause vasodilation, facial flushing, and discomfort such as dizziness and vomiting.

In the second step, acetaldehyde is detoxified under the catalysis of ALDH2 and converted into non-toxic acetate.

Therefore, the ability to quickly remove alcohol or acetaldehyde determines to some extent an individual’s alcohol intake.

Several large-scale prospective cohort studies have found that alcohol consumption is associated with an increased risk of cardiovascular disease and dementia.

In 2017, a 30-year cohort study published in BMJ found that drinkers of any level had a higher risk of hippocampal atrophy than the control population, and the higher the alcohol intake, the greater the risk [1] .

In 2019, a team from Peking University and Oxford University published online the results of a large-scale cohort analysis covering 500,000 people in the top international medical journal Lancet, and found that the more alcohol consumed, the higher the risk of blood pressure and stroke [2] .

Myrk is the magic drug?

Nonetheless, drinking is still an essential activity in modern life. How can you drink freely and stay healthy?

On July 4, 2022, the drug Myrkl, developed by the Swedish company De Faire Medical, was launched in the UK. The drug, billed as the first truly effective hangover remedy, is a probiotic preparation that breaks down 70% of alcohol in 60 minutes.

The mechanism of action of Myrkl is not complicated. The essence is that alcohol is decomposed in the intestine before it is absorbed into the blood.

After ingesting this probiotic supplement before drinking alcohol, the supplement releases the probiotic bacteria in the gut and immobilizes that site. T

he alcohol entering the intestine is decomposed into carbon dioxide and water under the action of probiotics, so the level of alcohol absorbed into the blood will be greatly reduced, effectively avoiding the negative effects of ethanol and its metabolites on the human body, and achieving “prevention of drunkenness” and “hangover” ” effect.

On June 23, 2022, the Pfützner Institute for Science and Health, the Institute of Internal Medicine and Laboratory Medicine at the University of Digital Technology in Medicine and Dentistry, Germany, published in the journal Nutrition and Metabolic Insights titled “Chronic Uptake of A Probiotic Nutritional Supplement (AB001) Inhibits Absorption.

of Ethylalcohol in the Intestine Tract – Results from a Randomized Doubleblind Crossover Study”, which preliminarily confirmed the “hangover” effect of the probiotic preparation, which was funded by the Swedish company De Faire Medical [3] .

The probiotic preparation AB001 used in this experiment has the same composition as Myrkl, and the placebo is rice bran of the same quality.

The researchers randomly assigned subjects to take AB001 (a probiotic supplement) or a placebo, 2 capsules per day for 1 week before drinking alcohol. On the day of the experiment, the subjects were allowed to drink spirits according to the standard of 0.3g/kg body weight.

A breath alcohol test and blood draw are then performed to determine alcohol levels. The area under the curve, AUC, was calculated to determine the alcohol absorption rate.

Figure 1 shows the average blood concentration after taking 2 capsules of AB001 or placebo for 1 week. The area under the mean blood alcohol concentration curve, AUCBlood, is:

The data showed that the blood alcohol content of the group taking AB001 was significantly reduced by 70.3% , and the difference was statistically significant. 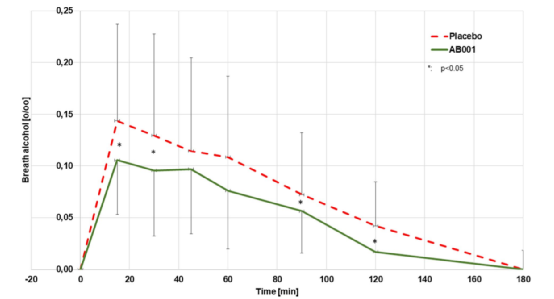 The data showed that the breath alcohol content of the group taking AB001 was significantly reduced by 30.7% , and the difference was statistically significant.

No differences were found on cognitive function tests performed 60 minutes after drinking, and no adverse or serious adverse events were reported in this study.

In conclusion, this study confirmed that blood alcohol levels were significantly reduced by more than 70% after 1 week of AB001 supplementation compared to placebo.

There was also a significant reduction in breath measurable alcohol, but to a lesser extent (about 30%).

Why is the effect of AB001 more pronounced in blood tests than in breath tests?

The researchers speculate that the results of breath alcohol measurements are more prone to physiological changes such as breath temperature, lung function, and breathing patterns before exhalation.

Therefore, the final alcohol content in exhaled breath is usually more dependent on the alcohol content absorbed early in the upper GI tract, whereas AB001 is only active in the gut.

Of course, this study has significant limitations. First, 10 (42%) of the subjects in this study had alcohol intake too low to measure blood alcohol concentrations, so data from these individuals could ultimately only be used for safety and tolerability analyses.

In future studies, alcohol intake should be appropriately increased under the premise of safety.

Another limitation was the small size of the study and the large differences in the age of the subjects, and ultimately only 14 subjects could be included in the efficacy analysis.

According to the company, Myrkl, named after the homonym of “miracle”, is currently priced at £30 a box, and pre-orders were sold out before the official launch in the UK.

The recommended dose of Myrkl is two capsules, taken 1-12 hours before drinking alcohol.

Nevertheless, the application of this preparation still needs to be viewed with caution, and its efficacy and safety still need more research support.

In any case, quitting smoking and limiting alcohol consumption should be the iron rule of maintaining a healthy life.