The regenerative potential of neurons in the peripheral nervous system (nervous system other than the brain and spinal cord) after injury in mammals and humans is severely limited by the slow rate of axonal regeneration.

Exercise and environmental factors can affect the signaling pathways of axon regeneration, some of which can be activated by intermittent fasting (IF) .

Intermittent fasting , which alternates between fasting and feeding, has been shown in many studies to prolong the lifespan of a variety of experimental organisms .

Fasting can also increase resistance to various oxidative stresses, such as acute surgical stress. In addition, there are studies showing that fasting can enhance the effect of cancer treatment.

However, whether intermittent fasting affects the ability of neurons to regenerate axons remains to be explored.

This study is the first to demonstrate that 3-indolepropionic acid (IPA ) , a metabolite of the gut microbiota Clostridium sporogenes, is required for neuronal axon regeneration , and intermittent fasting can alter gut microbiota activity and promote IPA , thereby significantly enhancing axonal regeneration and accelerating the recovery of sensory function.

The research team said that the study was conducted in mice, but the IPA-producing Clostridium sporogenes is also present in the human gut flora, and IPA is also present in human blood, so this study is likely to have implications for humans. The same applies. 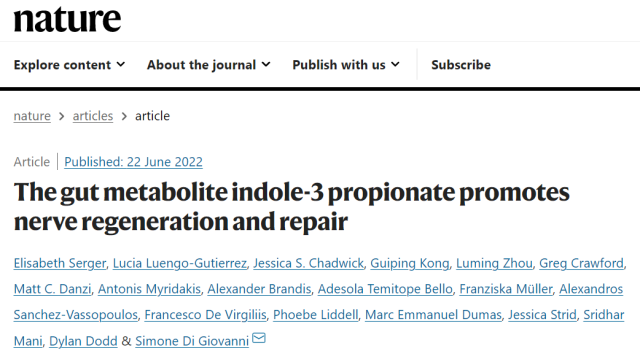 Therefore, the research team tried To investigate whether lifestyle changes contribute to recovery after nerve injury.

Previous research has linked intermittent fasting to wound repair and the growth of new neurons, and this study is the first to pinpoint exactly how fasting aids nerve repair.

The research team used a model of mice whose sciatic nerves , the longest neurons that run from the spine to the legs, were surgically severed.

Half of the mice underwent intermittent fasting (using a strategy of eating ad libitum the day and fasting the next day) , and the other half fasted unrestrictedly.

These diets were continued for 10 or 30 days before surgery, and their neuronal recovery was measured within 24-72 hours after surgery.

By measuring the length of the regrown axons, the team found that in the intermittently fasted mice, their axon length increased by about 50 percent.

They found that the blood of intermittently fasted mice had significantly higher levels of specific metabolites such as 3-indolepropionic acid (IPA ) . IPA is a metabolite of Clostridium sporogenes in the gut .

The results showed that when mice were devoid of C. sporogenes in their guts and the transplanted C. sporogenes could not produce IPA, their ability to regenerate nerves was impaired.

This suggests that the metabolite IPA of C. sporogenes has the ability to regenerate axons and repair nerve damage. 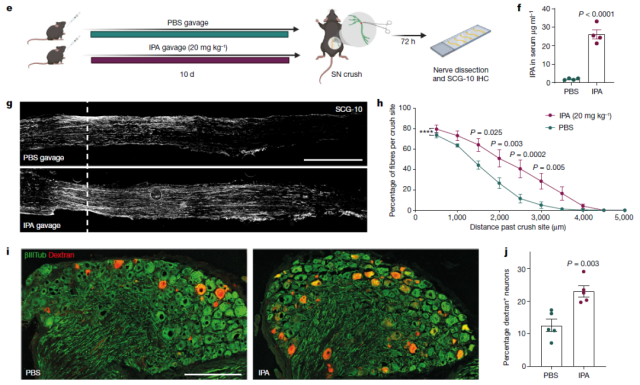 These results demonstrate the ability of gut microbiota metabolites such as IPA to promote sensory axon regeneration and functional recovery through immune-mediated mechanisms.

Professor Simone Di Giovanni said that this research opens up a whole new field, and the team’s follow-up goal is to investigate whether there are other metabolites that play a similar role, and whether IPA also increases after fasting in humans.

The role of axon regeneration, and whether repeated oral IPA can maximize the therapeutic effect.