Gene therapy has come a long way in the past few years.

On May 24, 2019, the FDA approved Zolgensma ® (Onasemnogene abeparvovec, AVXS-10 1 ) developed by Novartis for marketing in the United States for the treatment of children with spinal muscular atrophy (SMA) under 2 years of age.

The five-year cost of Zolgensma® was US$2.125 million,  so it is often called the most expensive drug in the world.

Because of its remarkable curative effect and amazing “sky-high price”, this medicine has attracted great attention from the industry and the general public since the first day of its birth.

Recently, according to foreign media STAT and Endpoints News, two children died after receiving Zolgensma treatment. The cause has been identified, and the culprit was acute liver failure.

Novartis confirmed in a statement to Endpoints News that the deaths occurred in Russia and Kazakhstan and were caused by acute liver failure.

The company will update the drug label “to indicate fatal acute liver failure has been reported” after notifying regulatory authorities in all countries where Zolgensma is sold.

Novartis began notifying doctors and payers the week of Aug. 8, according to STAT, which first reported the news.

The company highlighted Zolgensma ‘s significant effect in stopping SMA progression and helping infants reach therapeutic milestones such as being able to sit up and chew , which is a major role and benefit of the drug.

Regarding the deaths, a company spokesperson added, “This is important safety information, but it is not a new safety signal, and we strongly believe in the overall favorable risk/benefit profile of Zolgensma, which has been used to date in the treatment of 2,300 people worldwide. Multiple patients enrolled in clinical trials, administering medication plans, and taking medication in a commercial setting.”

When asked if the company would investigate potential changes to treatment regimens after a patient’s death, the company said “we continually evaluate treatment changes or monitor recommendations regarding Zolgensma.”

Additionally, in communications to physicians, the company emphasized the importance of intensive monitoring of liver function during corticosteroid taper and for at least three months after Zolgensma infusion and/or at other times as clinically indicated.

Safety concerns about AAVs have plagued the entire gene therapy field. Novartis had previously conducted multiple phase II trials, one of which observed an infant death, although a later investigation concluded that the death was not treatment-related, raising alarm bells that Zolgensma could cause brain inflammation.

Zolgensma’s label includes a boxed warning that the drug “can increase liver enzyme levels and cause acute severe liver injury or acute liver failure.” Novartis pointed to the incident as the first reported fatal case.

In a statement sent to Endpoints, the company said the death occurred about 5 to 6 weeks after the Zolgensma infusion and about 1 to 10 days after doctors began tapering the corticosteroids.

Sales of this product have continued to rise over the past three years. Zolgensma will bring Novartis sales of US$920 million and US$1.351 billion in 2020 and 2021, respectively, and sales of US$742 million in the first half of 2022. 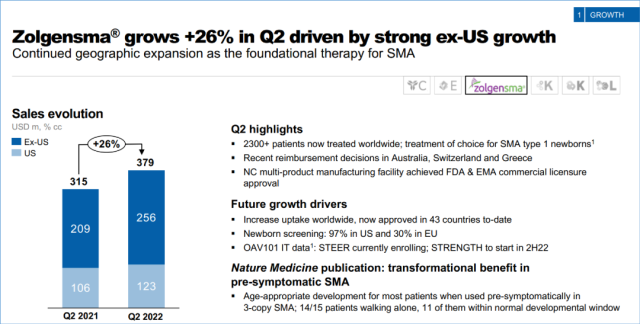 In addition to Zolgensma, there are two other SMA treatment drugs that have been approved by the FDA, namely Biogen’s Spinraza and Genentech/Roche’s Evrysdi .

Spinraza is the first FDA-approved drug for the treatment of SMA in children and adults.