Breast cancer is the most common cancer in women. The latest global cancer burden data in 2020 shows that there will be 2.26 million new cases of breast cancer and 680,000 deaths worldwide in 2020. Breast cancer has replaced lung cancer as the number one cancer in the world.

Breast cancer has become one of the five cancers with the highest 5-year survival rate ( 90% ) in the United States; 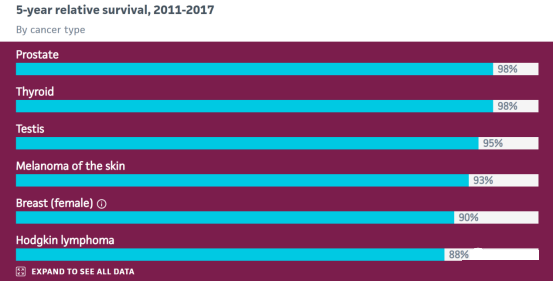 But not all types of breast cancer have good treatment outcomes. About 15% of breast cancers are triple negative breast cancers (TNBC) , which are caused by estrogen receptor (ER) , progesterone receptor (PR) , human epidermal growth factor receptor-2 (HER-2) deficiency Because of its name, endocrine therapy or HER2-targeted therapy is basically ineffective.

Triple-negative breast cancer is prone to visceral metastasis, and the median overall survival is less than 2 years.

Metastatic triple-negative breast cancer has limited treatment options due to a lack of targets.

In recent years, the progress in the treatment of metastatic triple-negative breast cancer has focused on the application of targeted therapy, including immunotherapy, anti-angiogenic drugs, PARP inhibitors, and antibody-drug conjugates.

However, related targeted drugs only benefit patients with positive molecular expression or specific gene mutations. For the highly heterogeneous subtype of triple-negative breast cancer, efficient and universal regimens are still needed to improve the benefits of the overall population.

From 2016 to June to October 2017, a total of 174 patients entered the study, and the enrolled patients were randomized into the immunocombination therapy group (dulvalumab + paclitaxel) and the placebo group (placebo ). + Paclitaxel).

After surgery, the patient did not continue to receive durvalumab.

The median follow-up time of this study was 43.7 months , and there was no significant increase in the pathological complete response rate in the immunocombination therapy group, but the remaining 3 indicators included 3-year survival rate without invasive tumor recurrence, Both the disease survival rate and the overall survival rate have increased significantly. The specific data are as follows:

The results of the study showed that the addition of the immune checkpoint inhibitor durvalumab to neoadjuvant chemotherapy can effectively improve survival, with a 3-year overall survival improvement of more than 10%.

Use order to ensure that patients can get better treatment effect.

In fact, in recent years, immunotherapy has also been advancing from the third and fourth line to the first line. In the field of neoadjuvant therapy, a previous Mount Sinai study found that the use of immunotherapy before surgery can make some liver cancer patients regress their tumors and avoid subsequent surgery, while increasing the overall survival of patients.

It is believed that with the progress of immunotherapy, cancer patients will have a longer survival time after treatment.