Is Aβ an effective target for the treatment of Alzheimer’s disease?

Is Aβ an effective target for the treatment of Alzheimer’s disease?  Let’s see what Harvard experts  said!

As society ages, the prevention and treatment of Alzheimer’s disease (AD) has become more and more important, but despite the efforts of scientists, there is still no single therapy that can achieve the ultimate goal: drastically reducing cognitive decline. .

Failing again and again makes one wonder if we got it wrong from the start?

The neurofibrillary tangles composed of amyloid beta (Aβ) plaques and tau protein aggregates that have been attracting attention for decades are actually not the real targets, so that led to the failure of drug clinical trials?

A recent review article[1] published in PLOS Biology discusses this.

The authors argue that this view is incorrect, that many genetic studies “overwhelmingly” support abnormal accumulation of Aβ as a major trigger for AD, and that clinical trials targeting Aβ have not been a complete failure, the researchers observed in the brain The reduction in Aβ plaques, and even tau and neurodegeneration, had a “disease-correcting” effect, and cognitive decline improved, but not to the desired extent. 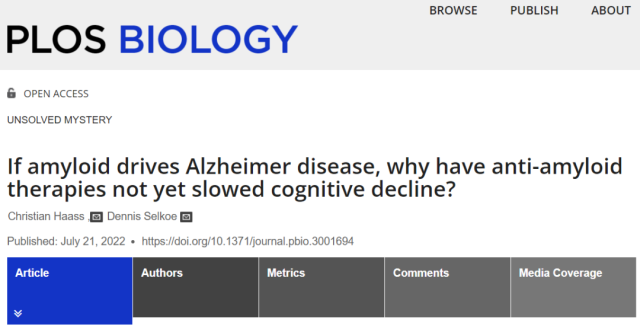 Preclinical evidence that Aβ accumulation is a key trigger for AD

From a genetic perspective, the discovery of genetic risk factors for AD has revolutionized AD research.

Early in the study, scientists discovered that people with Down syndrome often begin to experience neuropathology and clinical symptoms of early-onset AD around age 40 or even earlier for a simple reason— the amyloid precursor protein gene ( APP ) is located at number 21 Chromosomally, therefore, additional copies of APP in Down syndrome patients lead to lifelong Aβ overproduction [2,3].

This theory is also supported by other studies, in which a very small percentage of people with Down syndrome have a translocation type of Down syndrome , chromosome 21 is only partially copied, and if the translocation part contains APP , the patient will have develops into AD [4], but does not develop into AD [5] if not included .

Even in young Down syndrome patients without AD symptoms, diffuse plaques, mainly non-filamentous deposition of Aβ, begin to gradually fibrosis around the age of 20-30 years and “close up” to Aβ plaques in AD patients.

In addition to Down syndrome, there are some familial early-onset ADs carrying specific gene mutations, and their pathological changes of Aβ plaques and neurofibrillary tangles are the same as those of sporadic late-onset AD. 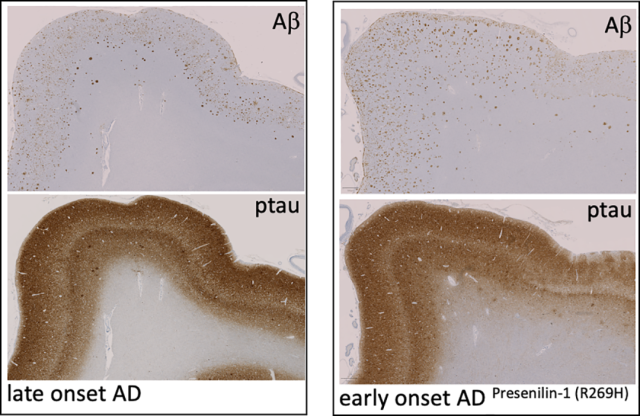 In early-onset AD, only 3 genes are currently known to carry disease-causing mutations. The first is APP . A mutation of APP is located at the site where APP is recognized and cleaved by β-secretase.

The mutation will cause APP to be more easily cleaved. Therefore, patients with this mutation will have about a 3-fold overproduction of Aβ [ 6,7].

Another type of APP mutation not only increases the production of Aβ, but also results in the production of Aβ42 and Aβ43 (42 or 43 amino acid residues), rather than the common Aβ40 [8], these longer and more hydrophobic Aβ can enhance neuronal Formation of toxic oligomers and deposition of Aβ plaques. In addition to APP , two other genes, PS1 and PS2 , also cause early-onset AD in this fashion.

These genetic studies clearly point to Aβ at the top of the AD pathological change cascade. 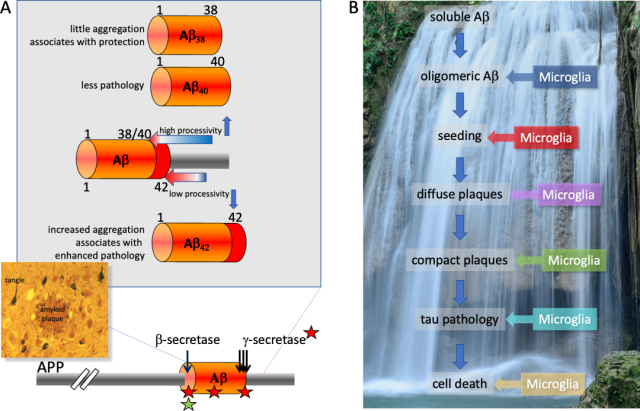 A: The process of secretase cleaving APP to produce Aβ; B: Aβ is at the top of the AD pathological change cascade

On this basis, can reducing Aβ prevent or slow down the development of AD?

In a large genetics study in Iceland, researchers sought to find genetic variants that could prevent AD and age-related cognitive decline, and they found a mutation in the β-secretase cleavage site of APP that allows Aβ Production is reduced by about 40% throughout the life cycle [9].

The same mutation was found in a 104-year-old who died in Finland, and neuropathological analysis showed that her brain had only minimal Aβ plaque deposits [10]. These studies support Aβ as a primary target for disease-modifying therapy.

The discovery of APP , PS1 , and PS2 mutations has led to the clinical application of several imaging, cerebrospinal fluid, and blood marker-based assays, which have helped researchers establish the pathological process of early-onset AD before symptoms appear [11].

Studies have shown that the earliest AD marker changes are a progressive decrease in free Aβ42 monomers in the cerebrospinal fluid as they begin to form oligomers and plaques, followed by an increase in soluble TREM2 production by microglia, and Aβ plaques can be detected by PET Block , later, 18F-FDG PET can detect decreased brain metabolism and MRI can detect progressive brain atrophy.

A similar study in late-onset AD patients also yielded a consistent course of change [12]. This also provides evidence for the “apex status of the AD pathological change cascade” of Aβ.

Anti-Aβ monoclonal antibody is a new type of treatment drug that has been validated most times in AD patients.

The results of multiple trials have shown that anti-Aβ monoclonal antibody can clear Aβ plaques and slow down cognitive and living ability decline to a certain extent [13-17] .

Among these mAbs, aducanumab was the first to receive FDA approval, but despite this, clinical trial results for aducanumab have been inconsistent.

The EMERGE trial, where positive results were observed, showed a significant reduction in Clinical Dementia Rating Scale (CDR-SB) scores in the high-dose aducanumab group compared with patients in the placebo group (P=0.0120), and Aβ plaques were dose-dependently Significant reduction, and a small number of patients also showed a reduction in cerebrospinal fluid p-tau [15].

However, the ENGAGE trial, which observed negative results, showed no significant difference in cognitive end points between the experimental group and the placebo group with the same high-dose aducanumab [15]. Therefore, aducanumab is also required to continue clinical trials to consolidate the evidence of its effectiveness while being approved.

The FDA emphasized that the clinical trial results of aducanumab showed a clear relationship between the reduction of Aβ plaques and the maintenance of cognitive function in patients, which was also consistent with the results of the other six anti-Aβ monoclonal antibody studies.

Not just aducanumab, but several other anti-Aβ mAbs are not “green lights” in clinical trials, and the 12-month results of the phase IIb trial of lecanemab show the possibility of improving AD composite scores (ADCOMS) with lecanemab compared to placebo was higher, but did not meet the prespecified minimum threshold, and at 18 months, lecanemab significantly slowed the rate of cognitive decline by 27% (P=0.00005), and all key secondary endpoints improved significantly (P=0.00005). p<0.01) [18]. 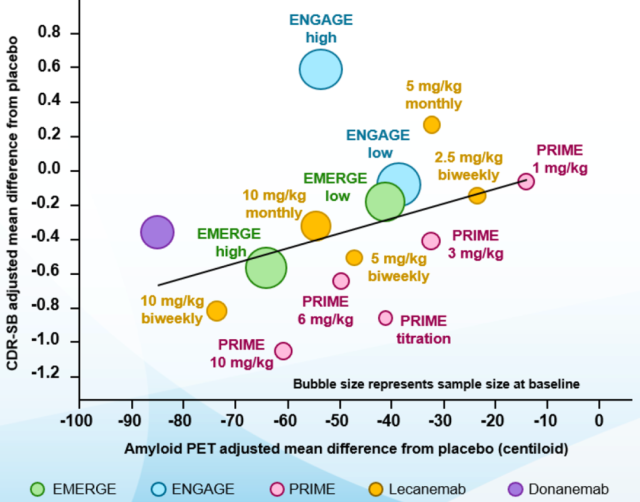 The review authors note that while there is some argument that many clinical trials of Aβ, including secretase inhibitors, have failed, which is evidence that Aβ is the wrong target, most of these trials were conducted before the aforementioned clinical trials of mAbs , did not use PET to detect Aβ levels in the brain, and there were safety concerns that led to early termination of the trial, and these early failures do not constitute rigorous scientific evidence against the Aβ hypothesis.

How does anti-Aβ therapy go from current “mixed results” to real success?

Both preclinical and clinical studies have shown that Aβ plaques are an early, invariable and necessary feature of AD onset , but our drugs have not achieved good results.

Probably the most plausible explanation available from current knowledge is that it is very difficult to translate preclinical and biomarker findings of Aβ pathology into clear clinical benefit.

In the author’s view, clinical trials of anti-Aβ mAbs have many shortcomings, including low doses administered, suboptimal patient selection, late initiation of treatment, and trial execution errors, such as early termination of trials or short time to set trial endpoints (12-18 months).

However, the authors believe that this situation has improved in the current phase III clinical trial. Therefore, it is unwise to slow down or abandon the development of anti-Aβ monoclonal antibodies.

Of course, for developers, there is still a lot to do to achieve real success, including more accurate quantification of the effective concentration of mAbs, rigorous design and implementation of clinical trials, and extending the length of trials. , the need to find more validated AD virological markers, as well as different cognitive and functional endpoints that are mutually confirmed , especially fluid and imaging markers of synaptic dysfunction.

So far, some sensitive markers are expected to be used to monitor the pathological progression of AD, mainly the soluble fragment of tau protein or p-tau, and the ratio of Aβ42/Aβ40 in blood.

Research is exploring whether they and other markers can be used for monitoring. AD progression, even as evidence of drug efficacy.

In addition, we are missing blood tests for immune cell activation in the brains of AD patients, which is one of the hurdles that will need to be overcome in the future.

The author pointed out in the final outlook that the current treatment is mainly aimed at the early stage of the disease, that is, mild AD, receiving anti-Aβ antibodies can achieve a certain degree of benefit, and further, if you want to prevent AD, you need to receive effective treatment before symptoms appear. intervention.

In addition, if intravenous antibody drugs are more widely successful, then subcutaneous administration and vaccines can continue to be explored, as well as more and more economical treatments. These advances are also promising, building on 40 years of research.