How to maintain the safety of the SARS-CoV-2 vaccine?

How to maintain the safety of the SARS-CoV-2 vaccine?  So far, the development of an mRNA vaccine for the prevention of severe acute respiratory syndrome coronavirus 2 (SARS-CoV-2) infection has been a success story, and no serious problems have been found in the ongoing Phase III clinical trials.

The British Medicines and Healthcare Products Regulatory Agencyon (MHRA) was the first institution to approve the emergency use of Pfizer’s biontech mRNA vaccine. However, there were two allergic reactions. MHRA suspended Pfizer’s SARS-CoV-2 mRNA vaccine to rule out any People who have a history of allergic reactions to any food, medicine or vaccine.

Allergic reaction is a serious multi-system reaction. It has a rapid onset and can lead to death due to hypoxia, cardiovascular collapse and other complications. It needs timely recognition and treatment with epinephrine to prevent the rapid development of life-threatening symptoms.

The cause of allergic reactions is that mast cells are activated through antigen binding and IgE cross-linking; these symptoms are caused by the tissue response to the release of mediators such as histamine, proteases, prostaglandins, and leucine. Typical symptoms include flushing and netting. Measles, throat edema, wheezing, nausea, vomiting, tachycardia, hypotension, and cardiovascular failure.

Patients become IgE sensitive due to previous exposure to antigens, which are similar to the clinical signs and symptoms of allergic reactions, which were previously called allergic reactions and are now called non-IgE-mediated reactions because they do not involve IgE.

They exhibit the same clinical characteristics and response to adrenaline, but they occur through direct activation of mast cells and basophils, complement activation, or other pathways, and can occur at the first exposure. In IgE-mediated allergic reactions, trypsin is usually elevated in the blood.

In non-IgE-mediated mast cell activation, the level of trypsin is lower, which is a feature that recognizes mast cells as the source of inflammatory mediators.

An allergic reaction is a treatable condition with no permanent effects. However, news of these reactions has raised concerns about the risks of new vaccines. These cases of allergic reactions raise more questions than they answer; but when we started vaccinating millions of people, these safety signals were almost Inevitably, they emphasize the need for a robust and proactive “safety roadmap” to define causal mechanisms, identify groups at risk of such reactions, and implement strategies that help management and prevention (Figure 1). 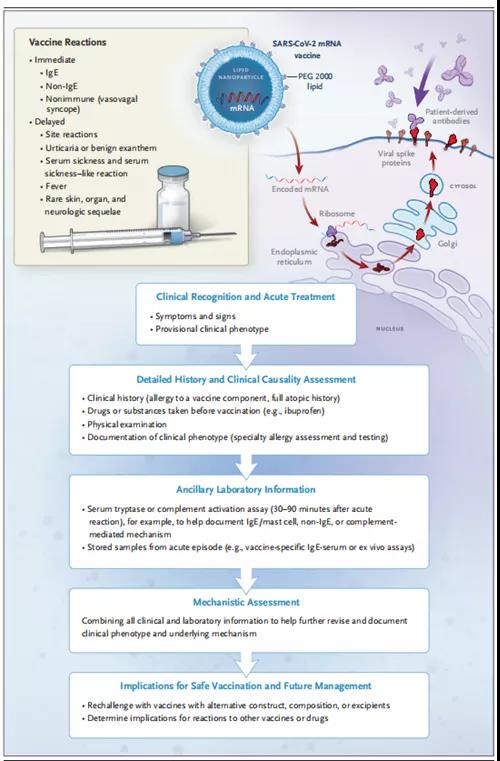 Regarding the cases of allergic reactions caused by the Pfizer-BioNTech vaccine in the United Kingdom and the current cases of allergic reactions in the United States, CDC recommends that only those who are known to be allergic to any component of the vaccine should be excluded from vaccination and are allergic to existing allergies Taking a systematic approach to cases and any new cases will ensure that our strategy remains safe not only for this vaccine, but also for future mRNA and SARS-CoV-2 vaccines with shared or similar components (Figure 1 and Table 1). 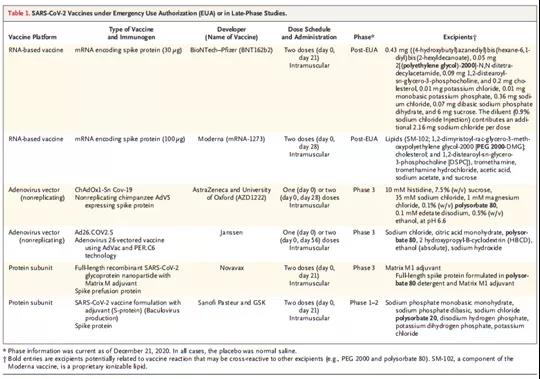 In the next few months alone, it is possible to see at least five new vaccines on the US market, and several more are under development (Table 1). It will be crucial to maintain public confidence to minimize hesitation on vaccines. In any post-EUA project, adverse events that have not been identified in clinical trials are to be expected.

In addition, the population studied in clinical trials may not reflect the susceptibility to adverse events that may exist in other populations. Regardless of the speed of development, all drugs, vaccines and medicines may have some adverse events. Fortunately, immune-mediated adverse events rarely occur.

Because we are now entering a period in which millions or even billions of people will be vaccinated globally in the next few months, we must prepare and formulate strategies to maximize effectiveness at the individual and population levels. Sex and safety.

It will also be crucial to develop systematic, evidence-based safe vaccination methods that will cross our understanding of the effectiveness of vaccines and the need for re-vaccination.