The Lancet: Develop a new type of CAR-T cell therapy for multiple myeloma!

Recently, an article was published in the international journal The Lancet entitled “Ciltacabtagene autoleucel, a B-cell maturation antigen-directed chimeric antigen receptor T-cell therapy in patients with relapsed or refractory multiple myeloma (CARTITUDE-1): a phase 1b/ In the 2 open-label study” research report, scientists from the Sarah Cannon Institute in the United States and other institutions have developed a new CAR-T therapy for the treatment of multiple myeloma through research. 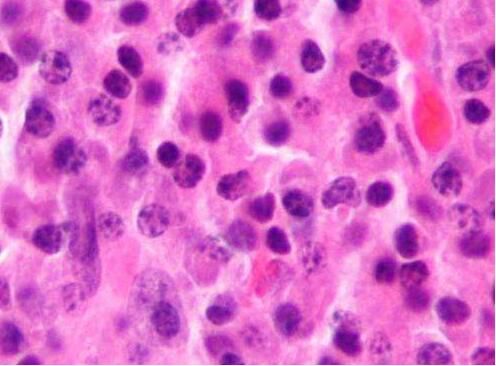 Photomicrograph of plasmacytoma, which is histologically related to multiple myeloma.

The researchers stated that the CARTITUDE-1 research plan is a registration phase 1B/II clinical trial. In the trial, the researchers tested the B-cell mature antigen-targeted CAR-T cell therapy ciltacabtagene autoleucel (cilta-cel). The therapy is suitable for patients with multiple myeloma who have previously received at least three first-line standard drug treatments, including proteasome inhibitors, immunomodulatory drugs, and CD38 antibodies.

Researcher Lin said that recently we also introduced the latest developments of this research at the American Clinical Oncology Annual Meeting. We said at the annual meeting that the response of patients receiving this therapy will continue to deepen, with a complete response rate of 80%. , And for myeloma patients who have undergone multiple treatments, these results are very impressive.

In the later period, researchers will continue to study and understand the clinical characteristics of patients with long-lasting remissions obtained using this therapy, as well as the reasons behind the relapse of some patients and improvement measures.

Although it cannot be compared in two independent single-arm studies of ide-cel and cilta-cel, the impressively higher response rate and progression-free survival of patients receiving cilta-cel is very exciting . However, the possibility of transforming this research into a clinically individualized therapy may require solving a variety of underlying problems, including ensuring that the transition from manufacturing to commercial products used for research is reliable.

In summary, the results of this article show that a single infusion of cilta-cel at the target dose of 0.75*10 6th power/kg CAR-positive living T cells may enable a large number of pretreated multiple myeloma patients to obtain early, deep and Long-lasting response and controllable safety, and current research results also form the basis for the recent submission of regulatory documents.