China’s mask production capacity can reach 5.5 billion per day, but many companies will quit the production due to supply overplus.

Masks can prevent the invasion of the virus, but they cannot prevent production capacity. After a year, masks once again fell into another difficult situation. Is it demand impact? Or is it the inherent logic of low-value consumable foam? 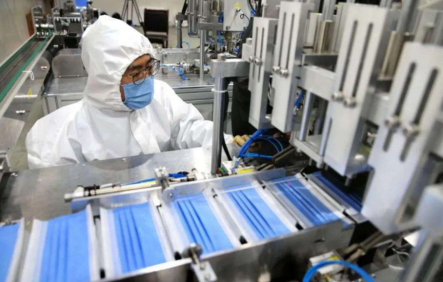 The production lines are being stopped

On January 24, according to Xinhua News Agency, Changsha Metro installed smart mask dispensers at 23 subway stations on Line 2. Each passenger can receive one mask for free every day. Since December 2020, the epidemic has once again become the focus of discussion, and masks have gone from a shortage last year to abundant this year. After 365 days, what is the current actual production capacity of masks?

Zhao Xuejun, the sales director of Henan Jianbo Ningkang, told Cyberlan Equipment that due to the impact of the Spring Festival holiday, the company’s masks had been concentrated in storage and production a year ago, and related production lines have also been suspended. The workers have gone back home. Is it the masks on the market or the company’s masks that can be delivered as long as the quantity is reported. This is a radical change compared with the same period last year.

In terms of price, a distributor of disposable consumables in Zhengzhou, Henan, revealed to Cyberlan that the current masks are basically a B2B model. Take medical surgical masks as an example. Their company starts with 130,000-150,000 and does not support distribution. The price of masks is also as low as RMB 0.12 per piece. In terms of export, most companies also have complete information, which can be sent to any designated port in the world, and the payment method also accepts US dollars, euros, pound sterling… He said that the demand for masks abroad is not so strong now, no longer So hot.

In addition to the less popular masks, machines that produce meltblown cloth and mask materials have also begun to sell.

Zhao Xuejun told Cyblan Instruments that many companies currently have idle machines purchased in 2020 due to overcapacity in the market. For example, second-hand screw air compressors are being processed at low prices, and some machines are only used. Until 30 days (22KW, 37KW, 55KW, 75KW), they are all in stock, permanent magnet frequency conversion, public frequency.

Not only that, high-end polymers, 18650, etc. are also available from stock. The warranty can be provided for two years. UL, KC, UN38.3, MSDS and other air and sea transportation are available for free sample testing.

In the phone call, Zhao Xuejun mentioned the most words that “there is no shortage of masks in the market, they are all in stock”.

The production capacity of masks has reached the amount supplied to the world.

On January 14th, the General Administration of Customs released data. From March to the end of December 2020, customs across the country inspected and released major epidemic prevention and control materials worth 438.5 billion, of which 224.2 billion masks were exported, with a value of 340 billion. This is equivalent to providing about 40 masks for everyone in the world outside of China.

Among the more than 220 billion masks, 65 billion are just medical masks; the number of protective clothing reached 2.31 billion; 289 million goggles and 2.92 billion pairs of surgical gloves.

Zhao Xuejun said to Cyberlan that the unprecedented surge in production capacity is also beyond my imagination. The country’s daily production capacity can reach 5.5 billion units (cyberlane also found confirmation from public data). The reason for entering this industry was 2020. At the beginning of the year, the epidemic situation had a huge vacancy in the demand for masks, and the market was also extremely short. From buying mask machines, applying for production qualifications, and purchasing meltblown cloth, approximately 4 million yuan was invested, but as the epidemic stabilized, it reached 5 In August, the inflated price of masks returned to before the epidemic.

“The cost has been recovered, and the price of masks has come down. After a few months of busy work, it is just not a loss.”

“The production capacity of various places has been greatly improved. The friends around were only 20 days late in entering the game, but they have already lost 700,000 to 800,000 yuan. Among them, the machine and melt blown cloth accounted for a very large proportion of the cost,” Zhao Xuejun added.

Lv Qingxiang, head of a disposable consumables manufacturer in Zhangzhou, Fujian, told Cyblan Instruments that not only the overproduction of masks, but also the overcapacity of the non-woven fabrics and ear straps of the masks are far beyond the domestic demand in China. The bubble in this part has risen very high.

“Many companies that were not originally in the medical industry have also applied for changes in their business methods and mask production during the epidemic. This is also an important reason for the increase in social production capacity.

The number of new companies has increased by about 40% year-on-year in 2019. And the company’s reserves have reached a level of saturation, and although the future epidemic situation has become regular, it will not give birth to a second outlet for masks. The homogeneity between mask companies and companies is still obvious, and there are no products. Difference, this is a common problem in the field of low-value consumables and a fatal flaw in the low-tech industry.” Lu Qingxiang added.