The mysterious connection between microRNA and cancer! 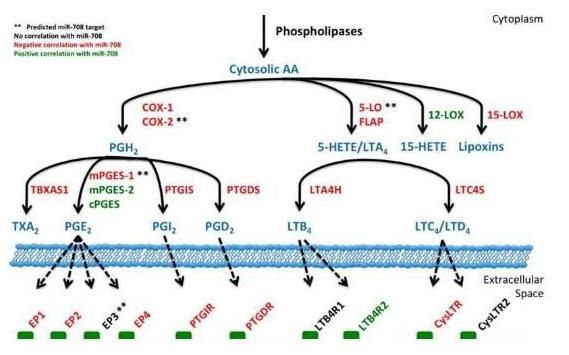 [1] Oncotarget: A new type of microRNA may target the production of prostaglandin E2 in lung cancer cells, which is expected to help treat lung cancer!

Recently, in a research report published in the international journal Oncotarget, scientists from the Rutgers Institute of Biomedical and Health Sciences and other institutions found through research that the expression of high levels of miR-708 is associated with lung squamous cell carcinoma. The survival rate is directly related, miR-708 can inhibit the production of PGE2 by inhibiting the expression of COX-2 and mPGES-1 in lung cancer cells.

In addition, the researchers also found that miR-708 can reduce the proliferation, survival and migration of lung cancer cells, which is partly due to the inhibitory effect of miR-708 on PGE2 signaling; in the article, the researchers also predicted a new miR-708 target As well as the regulators that regulate the expression of miR-708 in lung cancer, relevant research results indicate that the imbalance of miR-708 expression may promote the accelerated production of PGE2, which will enhance the production of tumor phenotypes of lung cancer cell clusters. Researcher Carol S. Lutz said that lung cancer is the most common type of cancer. In 2018, there were more than 2.09 million lung cancer patients worldwide. More importantly, lung cancer is also the most lethal cancer type in the global population. In 2018 There are approximately 1.79 million lung cancer-related deaths. Lung cancer is a collection of many different subtypes of cancer. Among them, non-small cell lung cancer accounts for 85% of all lung tumors. miR-708 also indirectly regulates the involvement of PI3K signaling, cell cycle progression, and epithelial-mesenchymal transition. And the expression of genes in the process of cancer cell stemness expression.

[2] Nat Commun: microRNA methylation may be used as a powerful biomarker indicating the occurrence of cancer

Recently, in a research report published in the international journal Nature Communications, scientists from Osaka University have discovered a new method to distinguish patients with early pancreatic cancer from healthy people through research. This may be expected to help develop early diagnosis of pancreatic cancer. New methods; molecular levels related to genetic functions, such as microRNAs, are key indicators of cancer-related abnormal activities. However, researchers are not sure how different molecules are changed in cancer cells. Now researchers have developed a new The method effectively distinguishes cancer tissues from non-cancer tissues.

The researchers said that the rate of methylation of microRNAs can effectively distinguish cancer patients from healthy individuals; microRNAs can show abnormal expression in cancer tissues, and they are also relatively stable in body fluids, so they can be used as an indicator of cancer. Although researchers can measure microRNA by the expression level of RNA, the technology lacks sensitivity and accuracy, especially although the measurement of microRNA is based on the assumption that whether it is methylated or not, its Both can identify and regulate targets, but in fact their role will change with the methylation status. For this reason, researchers want to solve this problem through research.

[3] PNAS: Focusing on the processing of microRNA is expected to develop new anti-cancer therapies

In more than 10 years of research on the mda-7/IL-24 gene, researchers found that the gene can help suppress most types of cancer. Recently, a report published in the international journal Proceedings of the National Academy of Sciences In the research report, scientists from Virginia Commonwealth University revealed how the mda-7/IL-24 gene affects the function of microRNAs to drive the progress of cancer. In addition to being very important for cancer research, the relevant research results are expected to help research the same. The molecular mechanism of cardiovascular disease and neurodegenerative disease driven by microRNA.

Initially, the researcher Paul B. Fisher discovered the mda-7/IL-24 gene, and then Fisher and his colleagues published a series of research reports to clarify in detail how this gene can inhibit cancer by directly affecting two important cell death mediators. The two cell death processes include apoptosis and toxic cell autophagy; then researchers have developed mda-7/IL-24 virus gene therapy, purified protein therapy and T cell transport therapy, all of which can be described above Process to selectively kill cancer cells.

A microRNA that can regulate inflammation may be used to treat inflammatory diseases such as asthma and cancer. Related research results were published in Cell Reports recently. This microRNA is miR-223, which is highly expressed in neutrophils that cause inflammation. When they are working normally, these blood cells can help the body fight infection, but sometimes they can also damage body tissues and cause chronic inflammation and disease.

In order to reveal the relationship between miR-223 and inflammation, a Purdue University research team created a zebrafish completely missing miR-223, and then they removed a small piece of its fin. “Inflammation is really strong,” said Qing Deng, a professor of biological sciences at Purdue University and the corresponding author of the study. “Neutrophils gather near the wound, and new cells are constantly coming over. This is similar to the results in the literature, but we want to know why this is the case.” A large number of gene expression analysis led them to the NF-kB pathway, NF- kB is a protein complex that regulates inflammation and cell proliferation that exists in almost all animal cells. The increased activation level of this pathway is responsible for the increased level of inflammation, although inflammation is limited to the deep layer of epithelial tissue (basal layer). This means that any therapeutic drug needs to reach the basal layer to be effective.

Cancer cells can undergo cellular processes similar to embryonic development, allowing them to leave the original site, pass through the surrounding tissues, and form worsening tumors in peripheral organs. In the latest issue of Nature Communications, researchers from the University of Basel discovered the molecular mechanisms that regulate this process. In the process of embryonic development, epithelial cells can break through the restriction of cell aggregation, undergo specific differentiation, and then migrate to specific parts to form corresponding structures. This process is called EMT (epithelial–mesenchymal transition). The process is reversible, so there is also a way of MET. This event recurs during embryonic development, which ultimately leads to the development of tissues and the human body.

Although it is very common during embryonic development, this process also occurs during the formation and deterioration of tumor cells. Therefore, researchers are very interested in this feature of tumors. Tumor cells can differentiate into EMT and MET, further gain stem cell activity, and develop resistance to cancer treatment. EMT makes it easier for tumor cells to leave the original tissue, penetrate the surrounding packages, enter blood vessels and spread in the body, eventually leading to the death of the patient.

For a long time, researchers have believed that only one strand of double-stranded microRNA can silence genes. Recently, a new study from Thomas Jefferson University showed that in certain cancer types, the two chains of certain microRNAs work together to promote the invasiveness and growth of cancer cells, which are two signs of poor prognosis for cancer patients. The researchers said that the coordination of such activities is indeed surprising. “Cancer Center (SKCC)-Jefferson Health. We know that the two strands of miRNA will not target a unified sequence, but despite this, we still see them working together. “

This work was published in the journal Nature Communications. The researchers obtained data from 5,200 cancer patient samples from 14 types of cancer and found that 26 types of microRNA pairs showed increased or decreased activity/abundance in a variety of cancers.

Although the early diagnosis of breast cancer has made great progress, breast cancer is still the most important cancer affecting women’s health in the world. Neoadjuvant chemotherapy (NAC) is currently a key factor affecting the success rate of surgery. In addition, NAC can also affect the sensitivity of tumor cells to chemotherapy.

Under normal circumstances, only a small number of breast cancer patients respond to NAC. Unfortunately, there is currently no effective method to accurately predict the response patient population. In addition, there is an urgent need to address the serious negative effects of excessive chemotherapy on patients. Some studies have tried to find biomarkers that can predict the responsiveness of NAC, thereby reducing the side effects and the risk of death caused by chemotherapy, which is of great significance for the treatment of breast cancer. miRNAs are a class of highly conserved short non-coding RNAs that can negatively regulate gene expression. Previous studies have found that a large number of miRNAs have increased or decreased expression in breast cancer cells, which further affects the occurrence and drug resistance of cancer cells.

miRNA is a type of short non-coding RNA, which is involved in the process of gene translation inhibition and mRNA degradation. Previous studies have found that miRNA plays an important role in metabolism, cell proliferation, differentiation, apoptosis and development. MiRNA dysregulation can trigger a variety of abnormal reactions in the body, including cancer, cardiovascular disease, neurodevelopmental disease, and liver disease. In particular, studies have shown that miR-148/152 can inhibit TLR signal transmission in DC by regulating the activity of calmodulin-dependent protein kinase IIa. In addition, DNA methylation plays an equally important role in the development and function of DC.

In order to study the role of miRNA in regulating DC response to TLR signals, Yifan Ma’s research group from Shenzhen Institute of Advanced Technology, Chinese Academy of Sciences conducted in-depth research, and the relevant results were published in the latest issue of Journal of Immunology. First, the author compared the expression of various immune factors in common DC and tumor-related DC. The results showed that the expression levels of CD86, MHCII, B7-H1 and other proteins in tumor-related DCs all decreased significantly. In contrast, the expression levels of miR148a, miR148b, and miR152 in tumor-associated DCs were significantly higher than those of conventional DCs.

In terms of mechanism, the researchers confirmed that SPRY4 is the direct target of miR-411-5p/3p, miR-411-5p/3p can promote lung tumor growth in vivo, significantly inhibit SPRY4 expression, and induce EGFR and AKT signal activation. It also induces the process of epithelial-mesenchymal transition in tumor tissue.