The positive expression intensity of cell lung cancer (NSCLCs) is negatively correlated with the patient’s prognosis, and can be used as an independent prognostic indicator.

What is the difference between IHC and ICC?

In the 1930s, the principles of immunohistochemistry (Immunohistochemistry, referred to as IHC) were already known, but it was not until 1942 that the first IHC research results were officially published. This is also known as a milestone in immunofluorescence technology. Albert Coons of Harvard Medical School published an article in the Journal of Immunology, using FITC-labeled antibodies to identify pneumococcal antigens in infected tissues. Since then, tissue fixation methods, detection markers, and microscopes have been continuously improved, making immunohistochemistry an essential tool in diagnosis and research. 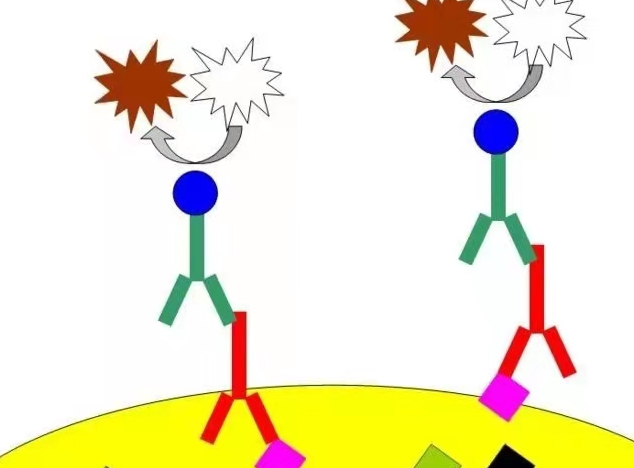 In the pathology department, using specific tumor markers, doctors use IHC to diagnose whether the tumor is benign or malignant, determine the stage and grade of the tumor, and determine the cell type and source of metastasis in order to find the location of the primary tumor. Similarly, IHC can also be used in drug development to determine the efficacy of drugs by detecting the up- or down-regulation of disease targets.

Immunohistochemistry refers to the detection of antigens (such as proteins) in tissue sections based on the principle of specific binding of antibodies to antigens.

The stem of immuno is the antibody used in the operation, and histo means tissue. Another similar technique is immunocytochemistry (Immunocytochemistry, ICC).
People often use these two words together, and they seem to be similar, but in fact they are still somewhat different.

For IHC, the tissue is from a patient or animal and is frozen or paraffin embedded. These tissues were made into slices about 4 μm thick, and then processed after mounting. In this way, researchers can observe the positioning of cellular components while maintaining the original structure of surrounding tissues.

For ICC, most of the extracellular matrix and other matrix components are removed, leaving only the entire cell for staining. The source of ICC can be cell suspension, from patients or animals (such as blood smears, swabs, etc.), or tissue culture cell lines performed in the laboratory.

In addition to biological sources, IHC and ICC also differ in the degree of sample processing. ICC needs to be permeabilized, either through a fixation process or a separate permeabilization step, so that the antibody can bind to the target in the cell.

IHC may not require a separate permeabilization step, depending on the thickness of the slice and the method of fixation.
IHC sections embedded in paraffin must be further processed for antibody staining.
Once the sample is processed, there is almost no difference between IHC and ICC staining operations.
Of course, as far as staining is concerned, optimization based on the antibody used is still indispensable.

4. Estrogen receptor (ER)-sex hormone action-nucleus-the higher the positive rate, the more effective the tumor is for endocrine therapy and the better the prognosis.

5. Progesterone receptor (PR)-sex hormone action-nucleus-the higher the positive rate, the more effective the tumor is for endocrine therapy and the better the prognosis.

6. The higher the positive rate of C-erbB-2–oncogene product-cytoplasm-is, the higher the malignant degree of the tumor. If ER and PR are positive and C-erbB-2 is also positive, the effect of tamoxifen treatment is not good.

7. The higher the positive rate of Ki-67-a cell proliferation marker-nucleus-is, the faster the tumor proliferates and the higher the degree of malignancy.

Ki-67 is a marker of cell proliferation. It is expressed in the G1, S, G2, and M phases of the cell cycle, but is absent in the G0 phase. It is closely related to the degree of differentiation, invasion, metastasis, and prognosis of many tumors.

11. P53 is mutant in immunohistochemistry, the higher the positive rate, the worse the prognosis. The wild-type half-life is very short.

12. Nm23 is a metastasis suppressor gene, and its positive expression is negatively correlated with tumor metastasis. It has been widely used in the detection of breast cancer, non-small cell lung cancer, gastric cancer, colorectal cancer, liver cancer, laryngeal cancer and other malignant tumors. Almost all studies have shown that patients with high expression of nm23 protein have a relatively low lymph node metastasis rate and a relatively long survival period.

13. E-CaE cadherin, a transmembrane glycoprotein that mediates adhesion between cells, its loss of function causes the destruction of connections between cells, and is mainly used for research on tumor invasion and metastasis.

14. PS2 estrogen regulatory protein, whose expression is related to the expression of ER, can be used as one of the indicators of endocrine therapy and prognosis judgment.

16. CK19 is distributed in the monolayer of epithelium and mesothelium. It is often used in the diagnosis of adenocarcinoma. Hepatocytes are not expressed, but the bile duct is positive.

19. CK7 is often positive for ovarian, lung and breast epithelium, and negative for colon, prostate, and gastrointestinal epithelium.

Breast cancer has often become a disease to be distinguished and excluded from metastatic cancer of unknown primary site in female patients. Because the obvious villin immunohistochemical positive staining was observed on the metastatic cancer tissue, it is extremely unlikely that this tumor is of breast origin.

Other tumors with negative expression of villin immunohistochemical staining include: ovarian serous carcinoma, urethral transitional cell carcinoma, and prostate cancer. Mesothelioma is also often negatively expressed by villin, so in some cases villin can also be used as an antibody to differentiate between mesothelioma and adenocarcinoma.
But there are some tumors of non-gastrointestinal origin that can express villin, such as endometrioid adenocarcinoma, ovarian mucinous carcinoma, renal cell carcinoma, and a small number of lung cancers. Some experts have also reported that villin is expressed in some cases of endometrial adenocarcinoma of the cervix.

Villin is also very helpful in the study of neuroendocrine tumors. It is well known that carcinoid and pancreatic islet cell tumors have similar morphological characteristics, and it is almost impossible to distinguish these two tumors only in morphology. Villin is particularly useful in this case, because it is reported in the literature that villin is expressed in 85% of gastrointestinal carcinoid cases, but there is no report of positive expression in pancreatic islet cell tumors. The expression of Villin on carcinoids is usually membrane-positive.

In addition, there is some evidence that the expression rate of villin in small cell carcinomas of the stomach and lower digestive tract is higher than that of other small cell carcinomas. Such as: lung, esophagus, bladder or prostate, etc. According to literature reports, about 40% of lung carcinoid cases are villin-positive, and villin is also expressed on other neuroendocrine tumors, such as medullary thyroid carcinoma and a small number of Meckel cell tumors.

21. MRP1 multidrug resistance-related protein 1, which affects chemotherapy sensitivity and is related to prognosis.

23. TS thymidine synthase is an important target of 5-FU. If it is highly expressed, the positive reaction is above ++, indicating that tumor cells are resistant to 5-FU.

26. NSE is mainly used for the diagnosis of neuroendocrine tumors

32. The sensitivity of the P504 formyl-CoA racemase test for the diagnosis of prostate cancer is 97%, and the specificity is 100%.

33. The advantage of AMACR is that it is cancer-specific and only exists in cancer tissues. Rubin said that AMACR can also be used as a diagnostic marker for other cancers. After examining various cancer cells, it was found that colorectal cancer, ovarian cancer, breast cancer, bladder cancer, lung cancer, lymphoma and melanoma all overexpress AMACR, with colorectal cancer and prostate cancer expressing the highest expression.

35. As a common acute lymphoblastic leukemia antigen, CD10 is mainly expressed in immature lymphocytes, and has application value in the diagnosis of Burkitt lymphoma, chronic myelogenous leukemia and other hematopoietic diseases. In recent years, it has been discovered that this antigen is expressed in certain tumors outside the hematopoietic system, such as endometrial stromal sarcoma and malignant melanoma. Antibodies have certain reference value in the diagnosis and differentiation of renal cell carcinoma.

Immunoelectron microscope observations showed that CD15 antigen is mainly distributed in the plasma boundary membrane, endoplasmic reticulum, Golgi apparatus and near the nuclear membrane of colorectal cancer cells. CD15 may affect and participate in the formation and formation of tumors by changing the configuration of the combined substrate. Transfer process.

38. CD56 is a nerve cell adhesion molecule, which is mainly distributed in most neuroectoderm-derived cells. It is often used in the diagnosis of astrocytoma, neuroblastoma, and neuroendocrine tumors. It is also an important marker of NK cell tumors and also marks small cell lung cancer. .

41. CD68 exists in the bone marrow and the macrophages of various nerve tissues. It is used for the diagnosis of granulocytic leukemia, various monocyte-derived tumors, including malignant fibrous histiocytoma (first choice).

Li Daoming et al. used immunohistochemical LSAB method to detect the expression of CD44v 4/5 in 42 cases of esophageal squamous cell carcinoma, and found that the positive expression rate in the lymph node metastasis group was 76.19% (16/21), while the positive rate in the non-metastasis group was 76.19% (16/21). 42.86% (9/12), there is a significant difference between the two groups.

54. The mechanism of bcl-2 resistance is anti-apoptosis, and those with high expression are resistant to most anti-cancer drugs/radiotherapy.

56. GA733 tumor-associated antigen, encoding epithelial glycoprotein 40, is an epithelial cell adhesion molecule (EP-CAM), which plays an important role in the growth and differentiation of epithelial cells. GA733 can be expressed in a variety of tumors, especially breast, colon and lung cancer.
Kubuschok et al. used GA733 to detect occult micrometastases in lymph nodes resected by non-small cell lung cancer, and found that the detection of occult tumors is an independent prognostic factor for judging overall survival. The expression of GA733 in colon cancer is related to the prognosis of the tumor, and the prognosis of the expression of cell membrane and cytoplasm is worse than that of the basement membrane.

57. TTF-1 Thyroid Transcription Factor-1, TTF-1 is expressed in thyroid gland epithelium and lung epithelial cells. In lung tumor studies, it was found that most small cell carcinomas of the lung, primary and metastatic lung adenocarcinomas, a small number of large cell undifferentiated lung cancers, and most atypical neuroendocrine tumors showed positive TTF-1 by immunohistochemistry. The lung squamous cell carcinoma and most typical carcinoids are negative for TTF-1. TTF-1 is also positive in papillary thyroid adenocarcinoma, while TTF expression is negative in other tissues. Based on this, it is believed that TTF-1 can be used to distinguish lung adenocarcinoma from squamous cell carcinoma, and helps to differentiate from lung metastatic adenocarcinoma.

The expression of TTF-1 in thyroid and its tumors

TTF-1 is mainly expressed in thyroid follicular cells and the main cells of the parathyroid gland. TTF-1 is the basic substance for thyroid differentiation and regulation of thyroglobulin secretion, and can promote the transport of thyroid peroxidase and iodine/sodium. TTF-1 is related to the activity of serum TSH, and active TSH-R can enhance the expression of TTF-1.
TTF-1 is expressed differently in benign and malignant thyroid tissues. Normal thyroid and benign adenomas express more, but less in papillary thyroid carcinoma and follicular carcinoma, but not in undifferentiated carcinoma

The expression intensity of TTF-1 in malignant thyroid lesions increases with age, and the lesions have a long period of tumor survival and a high recurrence rate.