Which solid tumors are CD70 CAR-NK/T suitable for?

Which solid tumors are CD70 CAR-NK/T suitable for?

According to the announcement of CRISPR Therapeutics and Nkarta, they have reached a strategic partnership for the research, development and commercialization of cancer immune cell therapy based on CRISPR/Cas9 gene editing technology.

According to the agreement, the two companies will jointly develop and commercialize two CAR-NK cells, targeting CD70 and unknown targets respectively. Today we will take a look at the CD70 target they mentioned.
Specific news link:

CD70 was first found to be mainly expressed in B cells in the germinal center and T cells in regional lymphoid tissues [1]. CD70 was initially identified as the ligand of CD27, which is a costimulatory receptor involved in T cell proliferation and survival [2,3]. CD70 is also expressed at low levels on the epithelial cells of the thymic medulla.

The study of CD70 expression revealed the same restricted expression profile in humans and mice [4,5]. CD70 was only found in a small number of activated T cells and antigen-presenting cells in draining lymph nodes during viral infection [6]. Interestingly, many human tumors can also express CD70, including solid cancers such as clear cell renal carcinoma (RCC), glioblastoma, and hematological malignancies [7-10].

In addition, studies [12] have shown that antigen presenting cells (APC) in the lamina propria of the intestine also express CD70, which suggests that CD70 may play a role in antigen presentation.

1. Documents that have been reported-which tumors express CD70

The high expression of CD70 in tumors may imply that tumors use CD70 to control CD27-expressing tumor-infiltrating lymphocytes, thereby causing immune escape.

CD70 is expressed in a variety of blood-borne tumors, such as lymphoma, leukemia, and multiple myeloma. Research [13] believes that CD70-positive hematological malignancies can promote tumor growth through tumor immune escape. TGF-β-induced and pre-existing intratumoral CD70+ memory effect T (Tm) cells from B-cell non-Hodgkin’s lymphoma (NHL) have a depleted phenotype and high levels of expression Programmed death-1 (PD-1) and TIM-3 (T cell immunoglobulin domain and mucin domain-3). It is worth noting that blocking CD70 can improve the ability of Tm cells to fight TGF-β, which indicates that CD70 induces the proliferation and failure of memory effector T cells [14].

The expression mechanism of CD70 in gliomas is not yet fully understood. Studies [16] have shown that CD70 expression in GBM is directly involved in promoting aggressive tumor behaviors, such as growth and migration/invasion, and promotes tumor proliferation through an immunosuppressive mechanism that induces T cell apoptosis. The results of CD70 CAR-T used in the treatment of glioma will be described in detail later.

Zwaenepoel et al. [19] performed immunohistochemical staining on the specimens of 49 ATC patients to analyze the expression of CD70, of which 24 cases (49.0%) showed at least weakly expressed (≥10%) tumor cells, and 17 cases showed high expression (≥50%), CD70 expression is absent in adjacent normal tissues and non-malignant thyroid cells; and CD27 expression is found in all ATC samples around tumors and in subgroups of tumor infiltrating lymphocytes. This suggests that the CD70-CD27 pathway may affect immune regulation in the tumor microenvironment, leading to immune escape.

2. Test to confirm the distribution of CD70

1) CD70 is overexpressed in primary and recurrent gliomas, but not in tumor-infiltrating T cells [20]

We and others have shown that T cell senescence, characterized by CD27 loss and telomere shortening, is a hallmark of tumor-related immune erosion [21]. We tried to determine the expression of CD70 and GBM in patients with primary low-grade gliomas (LGGs).

Using RNA-seq data collected from TCGA, we did not detect CD70 in normal brains, but observed significant up-regulation of CD70 in both major LGG and GBM. It is worth noting that primary and recurrent GBMs express the highest levels of CD70 (Figure 1A–B).

Many GBMs show diffuse membrane and cytoplasmic staining, and the average positive rate of each primary GBM expressing CD70 is 78%. The expression in LGG is limited to about 15% (Figure 1E). Since activated T cells may express CD70, we wanted to determine whether these T cells also contribute to CD70 positivity. 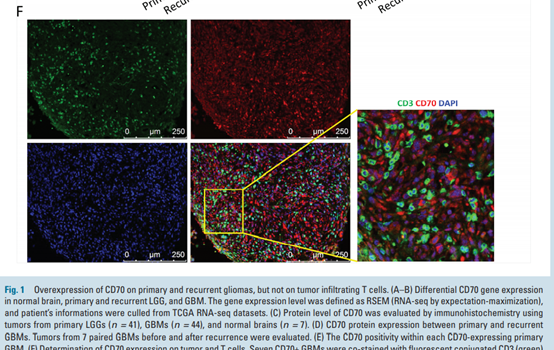 CD3 and CD70 were double-stained in samples from CD70+ patients. Overlapping images in these samples indicate that CD70 expression is limited to tumor cells and not limited to infiltrating T cells (Figure 1F).

To confirm that CD70 is a tumor-specific target, we used RNA to evaluate all 52 normal tissue types (a total of 8555 samples from different organs, including 1259 brain tissues) and B transformed by Epstein-Barr virus (EBV) The expression of CD70 gene in cells-seq database is excluded from GTEx Portal.

Based on these analyses, only EBV-transformed B cells showed significant expression of CD70. CD70 levels in normal samples were not detectable (Supplementary Figure S1). These results indicate that CD70 is a potential glioma target for the development of new therapeutic strategies.

In order to detect the expression of B7-H3 and CD70, a variety of tumor microarrays including kidney, breast cancer, esophageal cancer, liver cancer and colon cancer, as well as melanoma, glioma and normal tissue specimens were stained by IHC method. . The results showed that most tumor tissues are B7-H3 or CD70 positive.

Figure 1A and Figure S1 show representative case images of multiple tumors and normal tissues. In addition, based on RNA-seq analysis from the Cancer Genome Atlas (TCGA) and Oncomine database, we found that CD70 or B7-H3 transcripts are up-regulated in a variety of cancer types, including not only the above-mentioned tumor types, but also cervical cancer , Neck, pancreatic cancer, as well as leukemia and lymphoma (Figure 1B, S2-3). 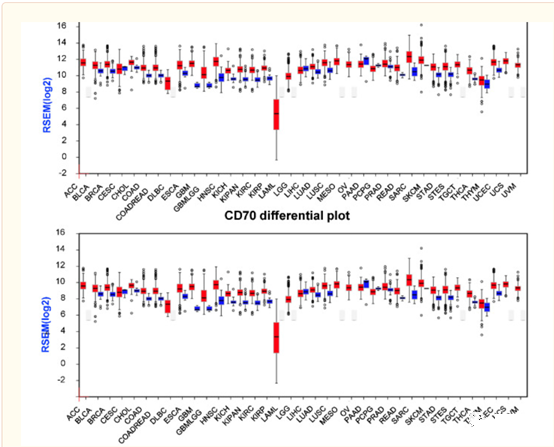 Figure 1 Expression of CD70 and B7-H3 onhuman tumor tissues. (A) Representative images of IHC staining of CD70 and B7-H3 on human tumor tissue microarrays were shown. (Scale bar, 20 μm) (B) IHCresult of CD70 and B7- H3 staining in normal tissues including brain, esophagus,stomach, intestine, pancreas, appendix. The representative images were shown. (Scale bar, 50 μm) (C) Differential expression profile analysis of B7-H3 andCD70 in tumor and normal tissues based on the TCGA database. 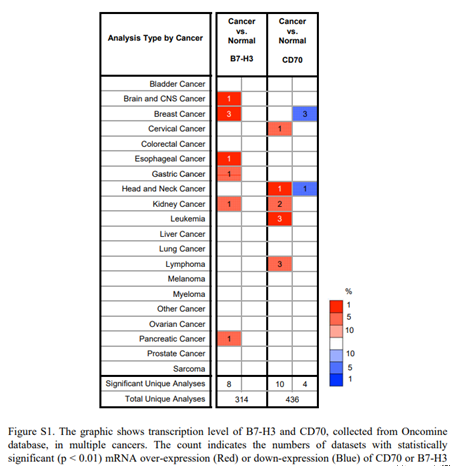 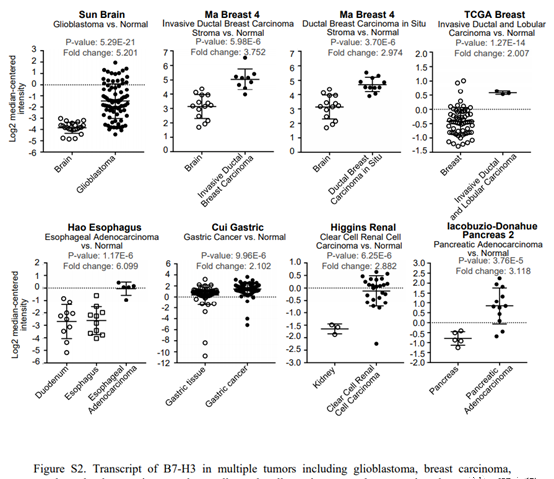 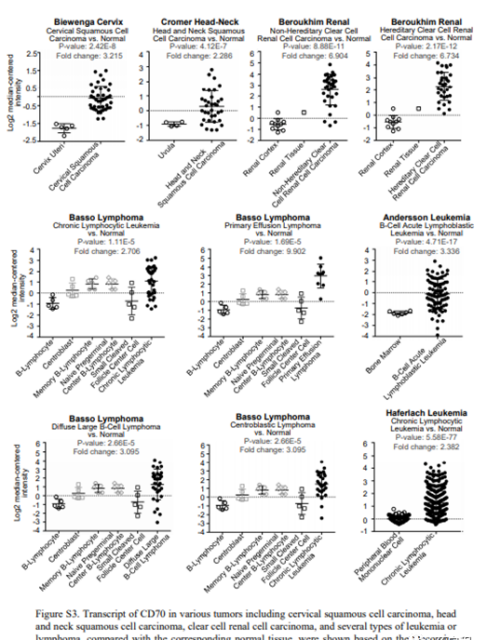 Similarly, we detected the expression of CD70 and B7-H3 in various tumor cell lines. Using purified human B7-H3 scFv-mFc and CD70 scFv-mFc fusion protein as the primary antibody, CD70 and B7-H3 can be detected on the surface of NCI-H460, A375, MDA-MB-435 and 786 by immunofluorescence. Tumor cells expressing -O (Figure 2A-B).

Consistent with the immunofluorescence results, the flow cytometry results also showed that CD70 and B7-H3 were highly expressed in these cell lines (Figure 2C-D). In addition, we also identified CD70-/B7-H3+ (Fadu) and CD70-/B7-H3- (K562) cells. 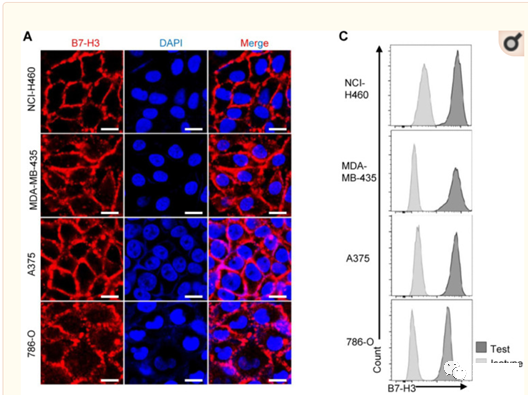 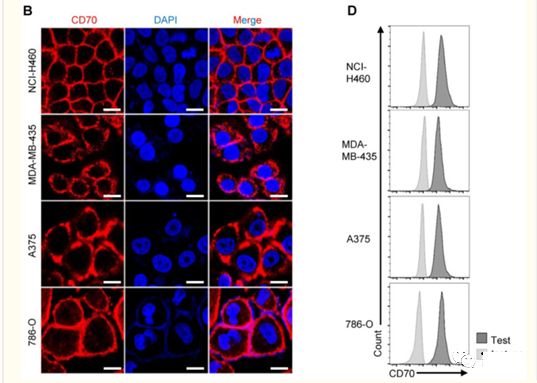 Figure S4 provides the immunofluorescence results of the control cell line and the sequencing analysis of gene editing. 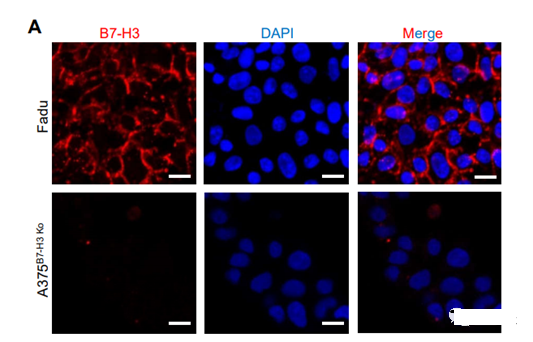 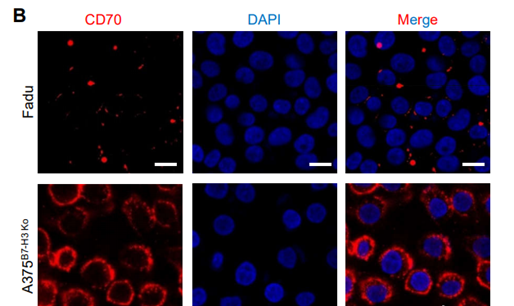