CAR-T cells targeting B7-H3 solid tumors. The high expression of B7-H3 in a variety of tumor types and the restricted expression in normal tissues make B7-H3 an attractive target for immunotherapy.

We generated chimeric antigen receptor (CAR) T cells targeting B7-H3 (B7-H3.CAR-Ts) and found that B7-H3.CAR-Ts control pancreatic ductal adenocarcinoma and ovarian cancer in vitro and in situ And the growth of neuroblastoma. And metastatic xenotransplantation mouse models, including xenotransplantation derived from patients. We also found that 4-1BB costimulation can promote lower PD-1 expression in B7-H3.CAR-Ts, and has higher anti-tumor activity when targeting tumor cells that constitutively express PD-L1. We took advantage of the cross-reactivity of B7-H3.CAR with murine B7-H3 and found that B7-H3.CAR-Ts significantly controlled tumor growth in syngeneic tumor models without significant toxicity. These findings support the clinical development of B7-H3.CAR-Ts. 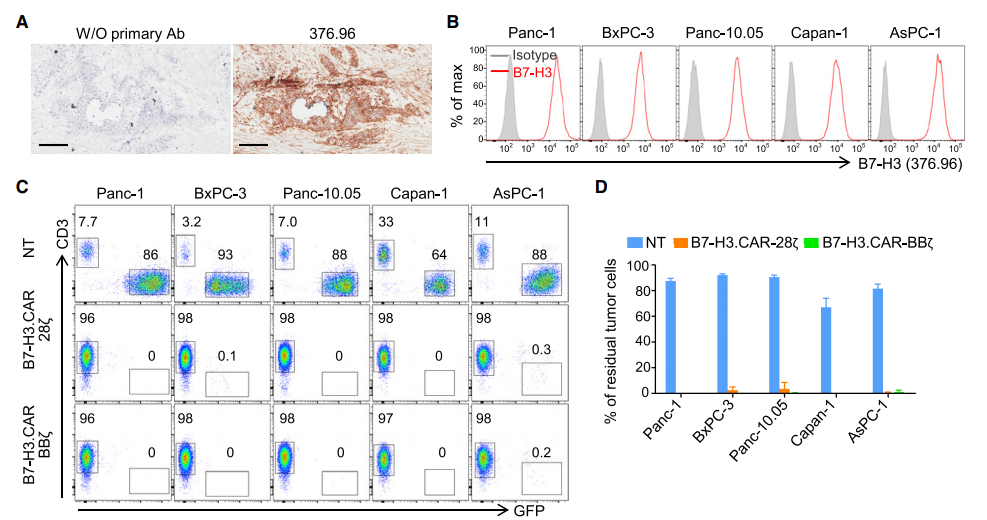 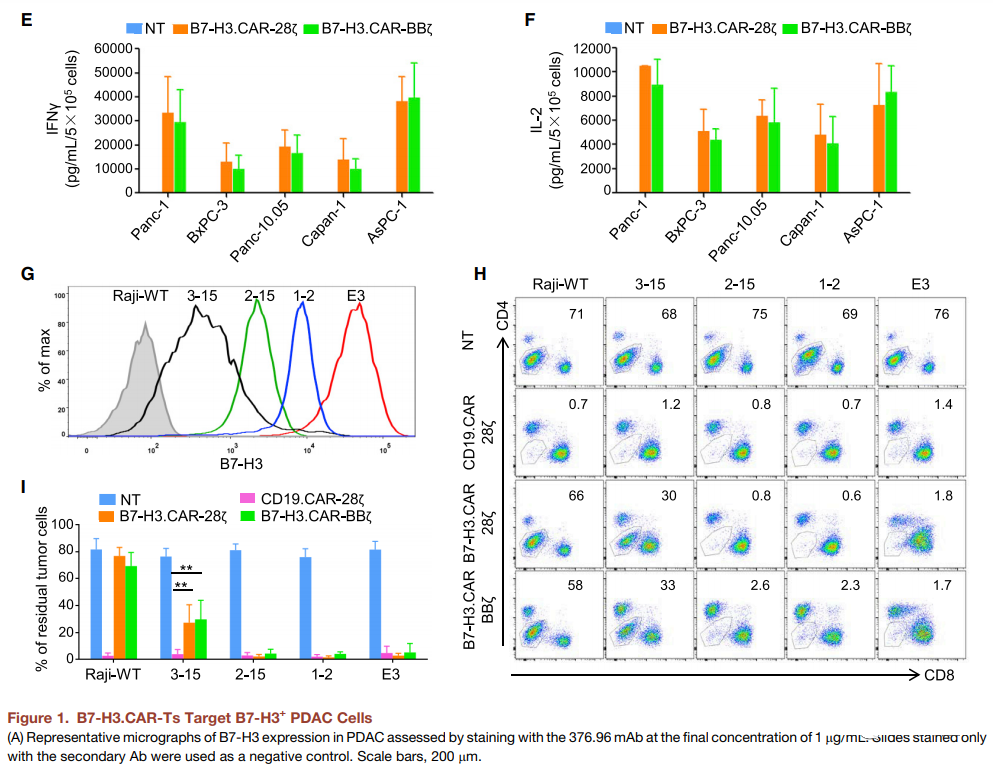 B7-H3.CAR-Ts specifically recognize tumor cells of 2Ig-B7-H3 or 4IgB7-H3 isotype that express human B7-H3 (Figure S1J-S1N). The anti-tumor activity of B7-H3 CAR-Ts was evaluated against five human PDAC cell lines expressing B7-H3 (Panc-1, BxPC-3, Panc-10.05, Capan-1 and AsPC-1) (Figure 1B). The PDAC cell line was co-cultured with control non-transduced T cells (NT), B7-H3.CAR-28z-Ts and B7-H3.CAR-BBz-Ts at different ratios of T cells to tumor cells. As shown in Figures 1C and 1D, even when the ratio of T cells to tumor cells is 1 to 5, B7-H3.CAR-Ts can still effectively control the growth of PDAC cells. Interferon-g and interleukin 2 [IL-2]) in the culture supernatant (Figures 1E and 1F), and through the proliferation of T cells in response to B7-H3+ target cells (such as carboxyfluorescein diacetate succinimide) Evaluation of urethane (CFSE) dilution assay) (Figure S10). We also evaluated how the density of B7-H3 expression in target cells affects the anti-tumor activity of B7-H3.CAR-T by generating single-cell clones of tumor cells expressing different levels of human 4Ig-B7-H3 subtypes (Figure 1G). ). The activity of B7-H3.CAR-Ts triggered by tumor cells expressing low levels of 4IgB7-H3 was significantly reduced, even though T cells and tumor cells were cultured with a high T cell to tumor cell ratio of 1:1 (Figure 1H and 1I). 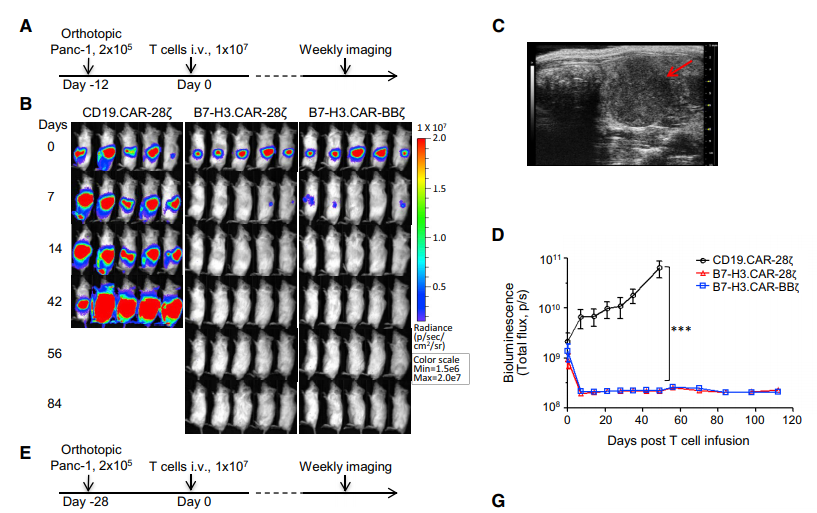 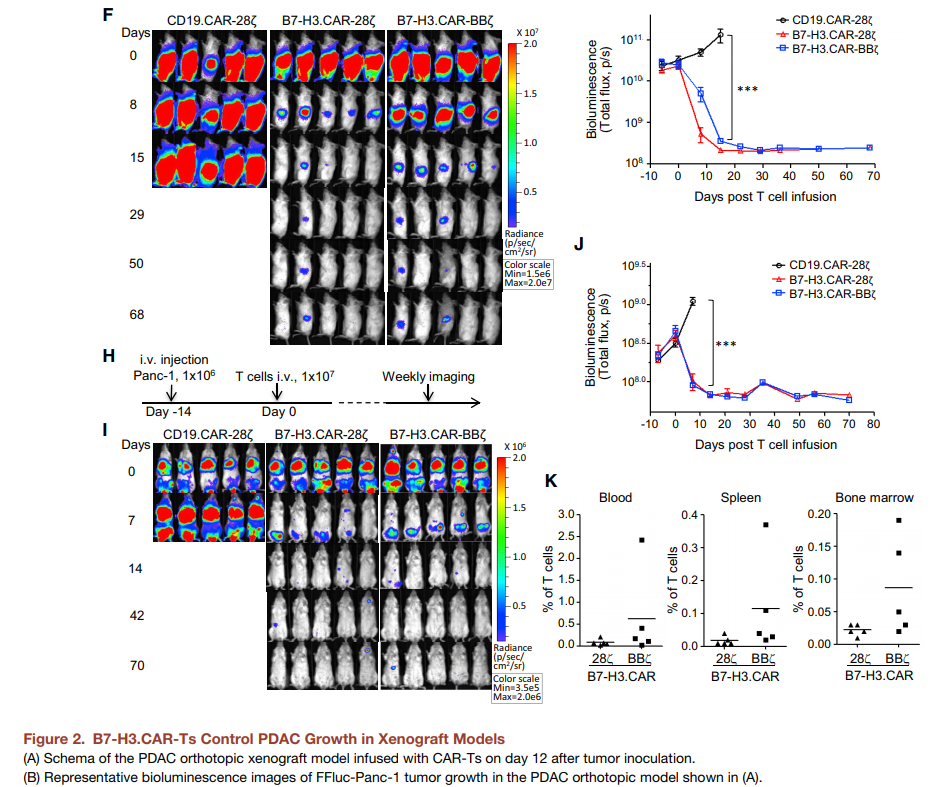 The PDAC patient-derived xenograft (PDAC-PDX) tumor model allows for histological, genetic and transcriptome true generalizations of donor patient-derived tumors (Siolas and Hannon, 2013). We analyzed the expression of B7-H3 in the early passages of the three main PDAC cell lines (PDAC-2, PDAC-3 and PDAC-6) established by ascites from three patients (Figure 3A), and compared them with NT, B7 -H3 co-cultivation. The ratio of CAR-28z-Ts or B7-H3.CARBBz-Ts in T cells to tumor cells is 1 to 5 and 1 to 10. As shown in Figures 3B-3D, B7-H3.CAR-28z-Ts and B7-H3.CAR-BBz-Ts effectively eliminated PDAC cells from the co-culture. The cytolytic activity was confirmed by the release of cytokines (IFN-g and IL-2) in the culture supernatant (Figure 3E and 3F), and the proliferation of antigen-specific T cells assessed by the CFSE dilution assay (Figure 3G) . PDAC-PDX tumor fragments were implanted into the pancreas of NSG mice in situ. We confirmed that after implantation in NSG mice, PDAC-PDX retained B7-H3 expression in vivo (Figure 3H). Three weeks after PDAC-PDX tumor implantation, the mice received CD19.CAR-Ts, B7-H3.CAR-28z-Ts or B7-H3.CAR-BBz-Ts iv. In the first PDAC-PDX model, B7-H3.CAR-28z-Ts and B7-H3.CAR-BBz-Ts control the growth of tumors and eliminate 5 small animals in the two groups on the 31st day after T cell infusion. Two of the mice, because the experiment was terminated, because the mouse-Ts treated with CD19.CAR showed signs of graft resistance to mouse disease, which were characterized by weight loss, reduced fur, and lethargy (Figures 3I and 3J). In the second PDAC-PDX model, sustained anti-tumor effects (>80 days) were observed without the occurrence of graft resistance to mouse disease (Figure 3K). 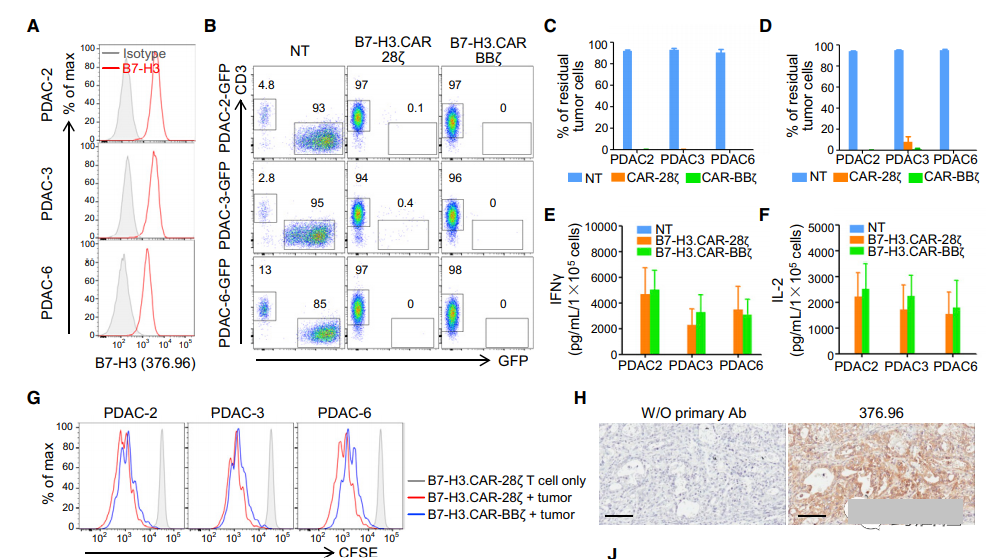 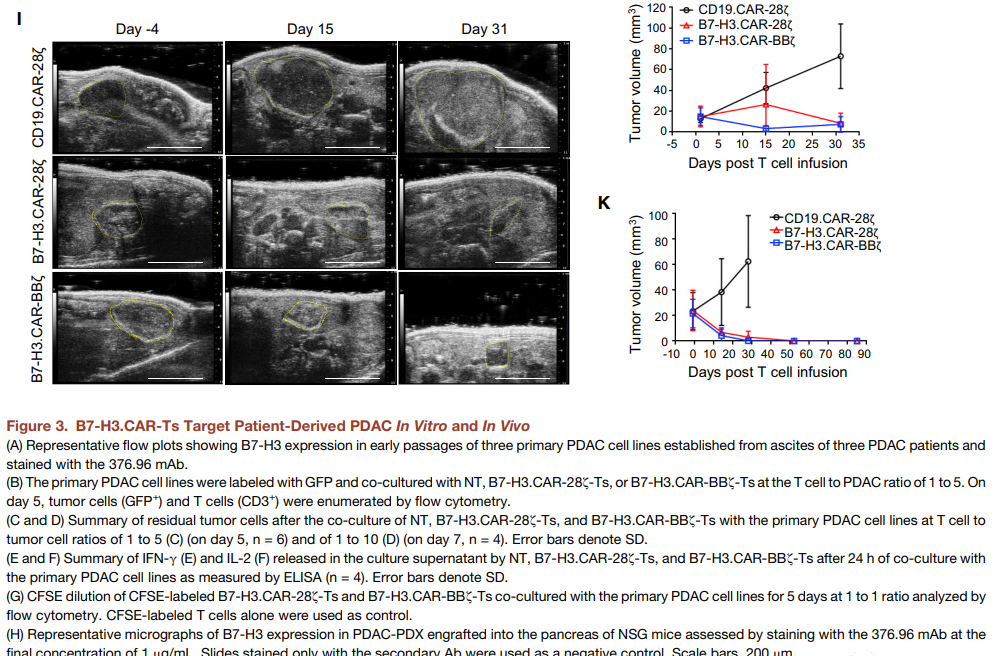 When targeting the PDAC constitutively expressing PD-L1, the PD-1 expression of B7-H3.CAR-Ts expressing 4-1BB is low and has excellent anti-tumor activity 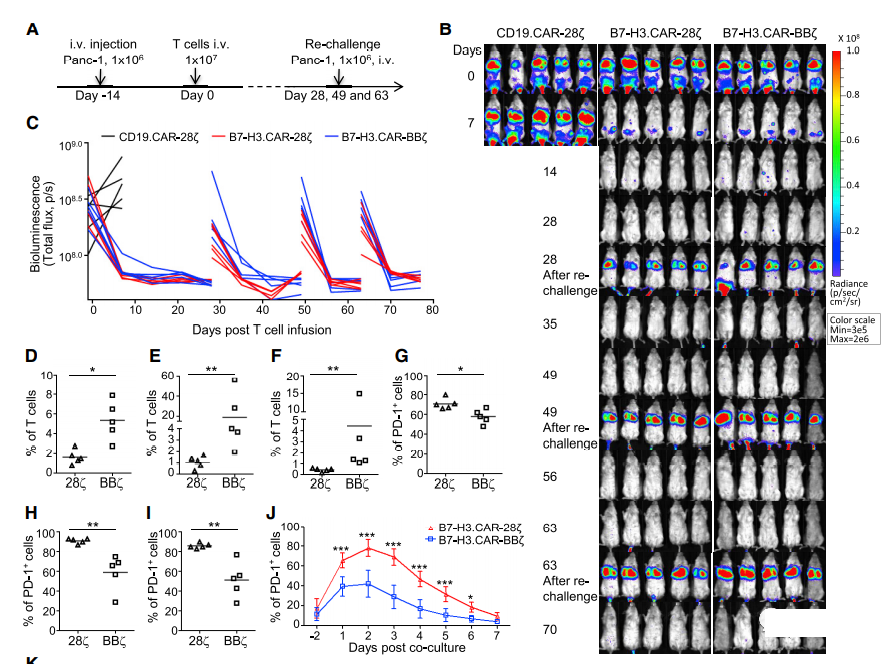 Since B7-H3 is widely expressed in a variety of solid tumors, we studied the anti-tumor effects of B7-H3.CAR-Ts in ovarian cancer (OC) and neuroblastoma (NB) models. Analyzed the expression of B7-H3 in 18 frozen section OC specimens installed in the tumor microarray (TMA), and used 376.96 mAb to stain 90% of the positive stains on tumor cells and stroma (Figure 5A and S3A– S3D). Three human OC cell lines expressing B7-H3 (SW626, SK-OV-3 and CaoV-3) (Figure 5B) were co-cultured with NT, B7-H3.CAR-28z-Ts or B7-H3.CAR- The ratio of BBz-Ts in T cells to tumor cells is 1-5. As shown in Figure 5C-5E, B7-H3.CAR-28z-Ts and B7-H3.CAR-BBz-Ts both effectively controlled the growth of OC. Culture the cell line and released cytokines in the supernatant. For in vivo verification, SK-OV-3 tumor cell line transduced with FFluc was intraperitoneally (i.p.) inoculated into NSG mice to generate i.p.p.1 OC model. Two weeks after tumor injection, mice received intraperitoneal injection of CD19.CAR-Ts, B7-H3.CAR-28z-Ts or B7-H3.CAR-BBz-Ts. Because this type of CAR-T delivery is currently being considered in clinical trials (NCT02498912). As shown in Figure 5F-5H, B7-H3.CAR-Ts significantly controlled tumor growth and prolonged overall survival. When T cells were injected intravenously, the anti-tumor activity of B7-H3.CAR-Ts was also observed (Figure S3E–S3G), although i.p. vaccination was more effective. 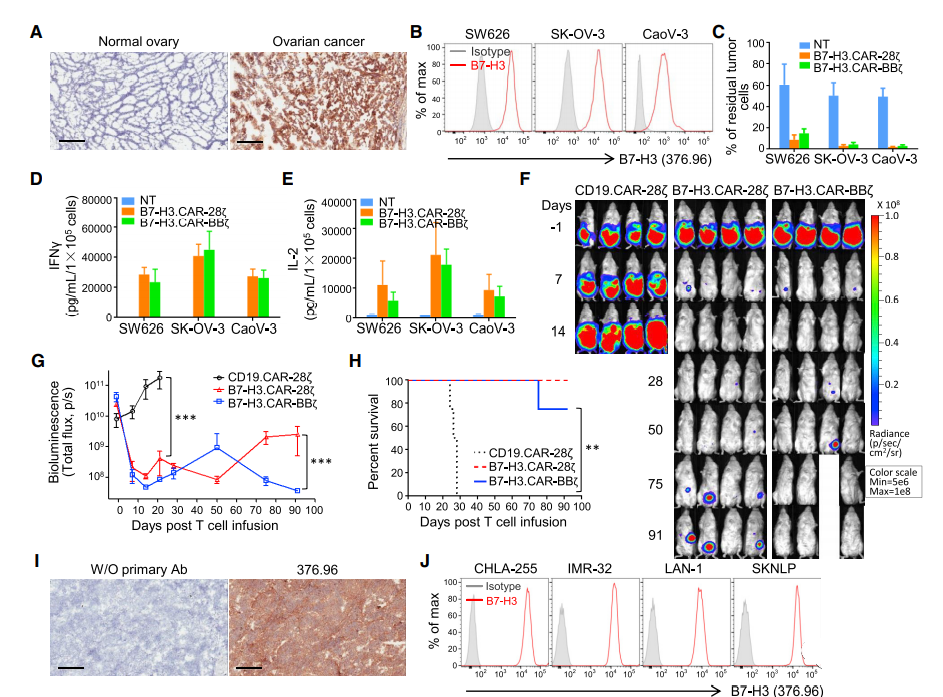 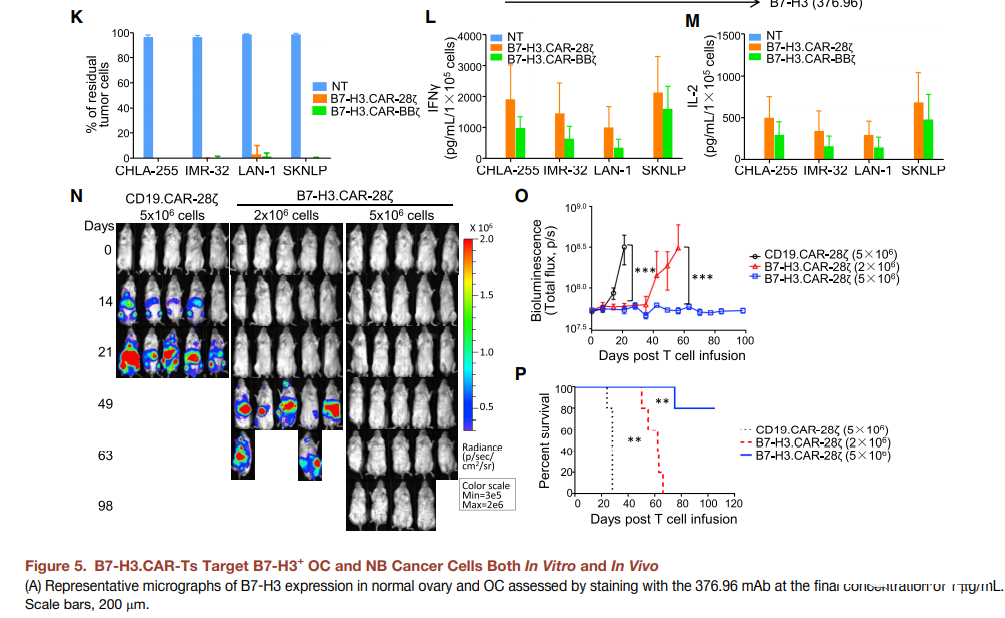 Then, we evaluated the role of B7-H3.CAR-Ts in NB. Frozen sections of human NB samples were positively stained with 376.96 mAb, and four human NB cell lines (CHLA-255, IMR-32, LAN-1 and SKNLP) were also positively stained (Figures 5I and 5J). The NB tumor cell line is co-cultured with NT, B7-H3.CAR-28z-Ts or B7-H3.CARBBz-Ts under the condition that the ratio of T cells to tumor cells is 1 to 5. As shown in Figure 5K, B7-H3 .CAR-Ts effectively controlled the growth of tumor cells. The release of cytokines in the co-culture supernatant confirmed the cytolytic activity (Figures 5L and 5M). CHLA-255 tumor cells transduced by FFluc were infused intravenously. Enter NSG mice to generate a metastatic NB model. In order to evaluate the dose effect of B7-H3.CAR-Ts, we infused two different doses of B7-H3.CAR-28z-Ts (2×106 and 5×106 cells/mouse) intravenously. Compared with mice treated with CD19.CAR-Ts 2 weeks after tumor inoculation, B7-H3.CAR-28z-Ts controlled tumor growth, and the highest dose of T cells eliminated tumors for more than 90 days (Figure 5N- 5P).

We used the 376.96 mAb derived from B7-H3.CAR to evaluate the expression of B7-H3 in normal human TMA on frozen sections. The experienced pathologist (K.G.) performed a blind analysis of the slides. Major organs such as heart, brain, lung, kidney and muscle are all B7-H3 negative, while focal, weak to moderate B7-H3 positive staining is observed in the cytoplasm of some normal human tissues (Figure 6 And Table S1). The highest expression was observed in the stomach, with moderate to intense staining of gastric epithelium, weak to moderate staining of cytoplasm of adrenal glands, and moderate to intense staining of acinar epithelium in salivary glands. In order to establish a murine model for evaluating the potential toxicity of B7-H3.CAR-Ts, we evaluated whether 376.96 mAb cross-reacts with murine B7-H3 (mB7-H3). As shown in Figure S4A, human Raji cells engineered to express mB7-H3 were positively stained with 376.96 mAb, indicating that 376.96 mAb has a cross-recognition effect on mB7-H3. In the co-culture experiment, Raji cells expressing mB7-H3 were removed by B7-H3.CAR-Ts and CD19.CAR-Ts (Figure S4B and S4C). In addition, B7-H3.CAR-Ts and CD19.CAR-Ts release considerable levels of IFN-g and IL-2 (Figures S4D and S4E), which indicates that B7-H3.CAR-Ts and CD19.CAR-T are When targeting Raji cells expressing mB7-H3, Ts showed similar activation. We also directly measured the binding affinity of 376.96 mAb to human and murine B7-H3 proteins (Figures S4F and S4G). Even if compared with the human isoform h2Ig-B7-H3, which is closest to mB7-H3, the binding affinity to mB7-H3 is lower, B7-H3.CAR-Ts will still release a large amount of IFN-g in response to 50%. The nM mB7-H3 protein (Figure S4H) indicates that a mouse model with immune capacity may have a guiding significance for the potential toxicity of B7-H3.CAR-Ts. We used the same scFv derived from 376.96 mAb and replaced the human signaling molecule with murine CD28 and CD3z (mB7-H3.CAR) to generate murine B7-H3.CAR (Figure S4I). The vector was then used to transduce activated murine T cells to express CAR (Figure S4J–S4L). The mouse version of mCD19-specific CAR was used as a control (mCD19.CAR) (Kochenderfer et al, 2010). mB7-H3.CAR-Ts specifically target the murine PDAC cell line KPC-4662 (Figures 7A-7D) engineered to express mB7-H3 and release cytokines (Figures 7E and 7F). To ensure that 376.96 mAb cross-reacts with mB7-H3 endogenously expressed in mouse cells, we evaluated the expression of B7-H3 in C57BL/6J mouse bone marrow-derived dendritic cells (BMDC) (Lee et al., 2017; Prasad et al. 2004). Although unactivated BMDC has undetectable B7-H3 expression, lipopolysaccharide (LPS) activation can induce B7-H3 expression. 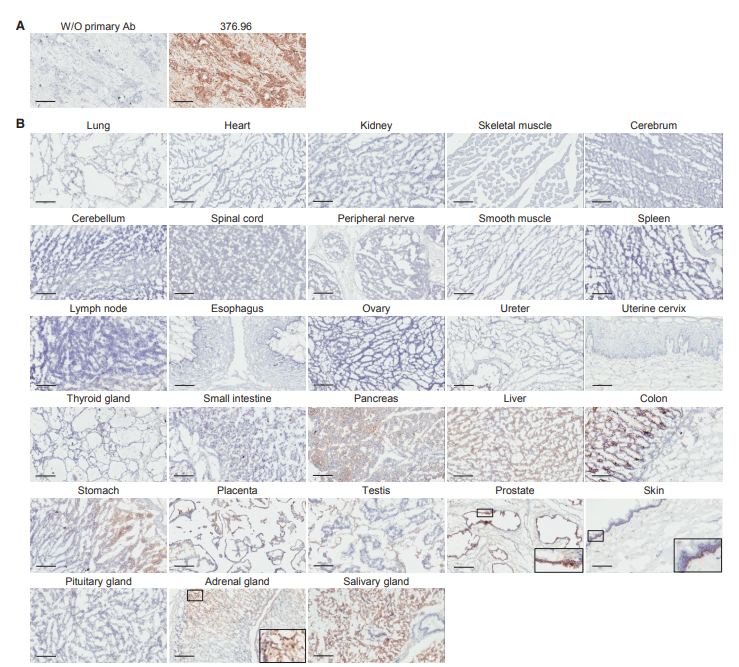 The level when the cells were stained with 376.96 mAb or another mouse-specific B7-H3 mAb (Seaman et al., 2017) (Figure 7G). In order to test whether BMDC activated by LB can be targeted by mB7-H3.CAR-T, we combined BMDC activated by LPS with syngeneic NT, mCD19.CAR-Ts or mB-H3.CAR-Ts in a ratio of 1:1 bring up. As shown in Figure 7H, we observed that the IFN-g release of mB7-H3.CAR-Ts was extremely low or undetectable in response to activated BMDC. We also evaluated the expression of mB7-H3 in normal mouse tissues and observed a similar distribution of B7-H3 to human tissues (Figure S5 and Table S2). In order to study the potential toxicity of mB7-H3.CAR-Ts in immune-competent mice, we irradiated non-tumorous 6-week-old C57BL/6J mice with 400 cGy to establish a beneficial effect on the expansion of adoptively transferred T Go to the lymphatic environment. Cells, and then injected them into the vein for 2 days after using the same line of control NT, mCD19.CARTs or mB7-H3.CAR-Ts. 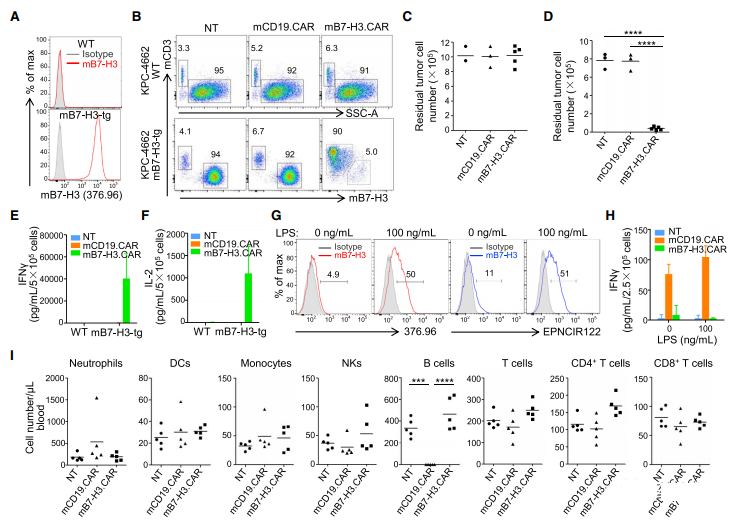 Five days after T cell infusion, mice receiving mCD19.CAR-Ts showed B cell depletion, while no significant changes in blood counts were observed in mice receiving mB7-H3.CAR-Ts (Figures S6A and S6B) . Since clinical studies on CAR-Ts adoptive transfer have shown that the maximum expansion mediated by CD28 costimulation and potentially lethal toxic effects occur within 2-3 weeks after T cell infusion (Brentjens et al., 2013), The mice were monitored. The following 2 weeks were followed by euthanasia to assess organ toxicity. At the time of euthanasia, all mice were alive and healthy. B cells in the blood, spleen and bone marrow of mice treated with mCD19.CAR-Ts continued to deplete, while the cell counts of mice treated with mB7-H3.CAR-Ts did not decrease (Figure 7I-7K). Similarly, no obvious lesions or abnormal infiltration of T lymphocytes were observed in the tissue sections (Figure S7 and Table S3). In order to rule out any effects caused by irradiating mice before injecting CAR-Ts, we also injected c57BL/6J mice with unstimulated mB7-H3.CAR-Ts. The mice were euthanized and analyzed on the 11th day after T cell injection, and showed no obvious signs of toxicity (Figure S6C-S6E). We further evaluated the role of mB7-H3.CAR Ts in tumor-bearing mice. In short, six-week-old C57BL/6J mice were locally transplanted into the pancreas, and the mouse PDAC tumor cell line KPC-4662 was modified to express mB7-H3. 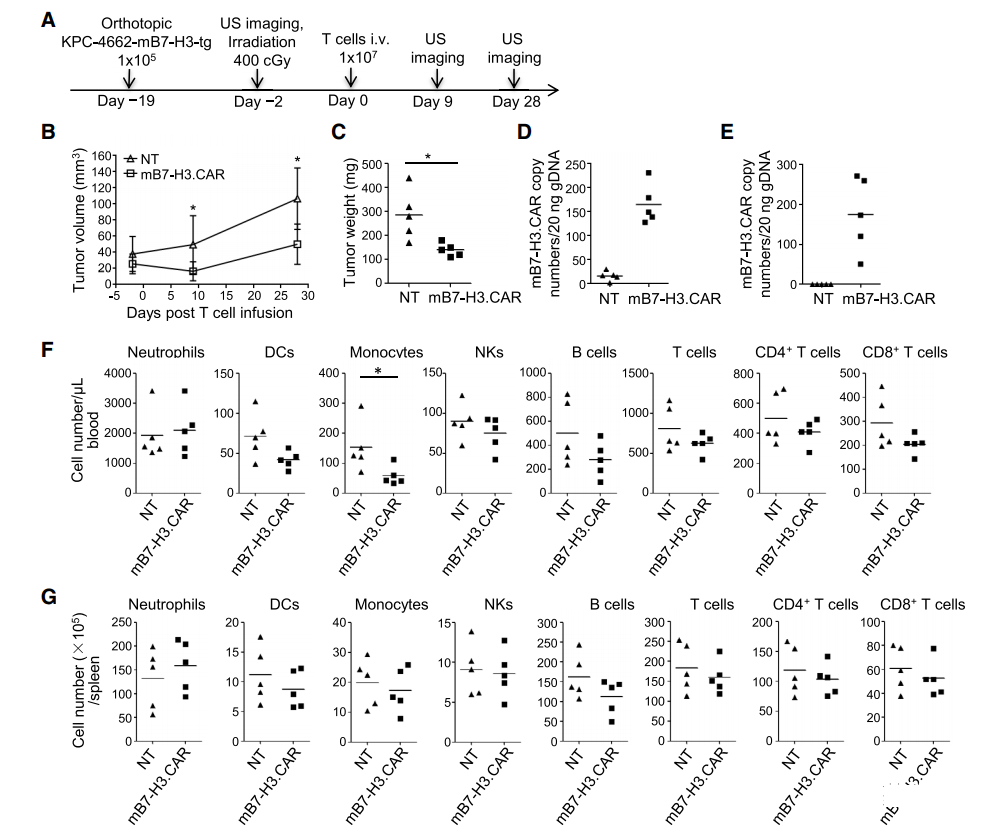 After 17 days, the mice were irradiated with 400 cGy and then infused intravenously. Two days later, the syngeneic control NT or mB7-H3.CAR-Ts was used (Figure 8A). As shown in Figures 8B and 8C, through ultrasound measurement and tumor weight assessment, mB7-H3.CAR-Ts controlled tumor growth for 4 weeks. When euthanized on day 33-34, 2 out of 5 control mice showed liver metastasis in addition to primary pancreatic tumors, while no liver was observed in mB7-H3.CAR-Ts-treated mice Transfer. When the esophagus was unobstructed, we did observe a slight increase in T cell infiltration and PD-1 expression at tumor sites in the mB7-H3.CAR-Ts treatment group in mice compared with control mice (Figure S8A-S8D) . The molecular signal of mB7-H3.CAR can be detected in the spleen and tumors collected from mice treated with mB7-H3.CAR-Ts, but not in control mice (Figures 8D and 8E). There was no significant reduction in the number of hematopoietic cells or immune cells in the blood, spleen, bone marrow and lymph nodes of mice treated with mB7-H3.CAR-Ts, except that the number of monocytes in the peripheral blood decreased (Figure 8F, 8G, S8E And S8F), and no obvious lesions were observed in the tissue sections (Figure 8H and S8G; Table S4). Overall, these results indicate that B7-H3.CAR-Ts can promote tumor control in tumor-bearing C57BL/6J mice without causing detectable organ toxicity.