Mitochondrial DNA: How do mothers affect their children’s height and lifespan?

Recently, researchers from the University of Cambridge analyzed the biological data of 350,000 people and found that the mother’s mitochondrial DNA mutation is closely related to the increased risk of many common diseases such as type 2 diabetes and multiple sclerosis in the offspring. At the same time, the mother’s mitochondrial DNA will also affect the height and lifespan of the offspring.

The study was titled “An atlas of mitochondrial DNA genotype–phenotype associations in the UK Biobank” and was published in the latest issue of Nature Genetics, Professor Patrick F. Chinnery, Department of Clinical Neuroscience, University of Cambridge, and Department of Public Health and Primary Care Professor Joanna MM Howson co-led the research. 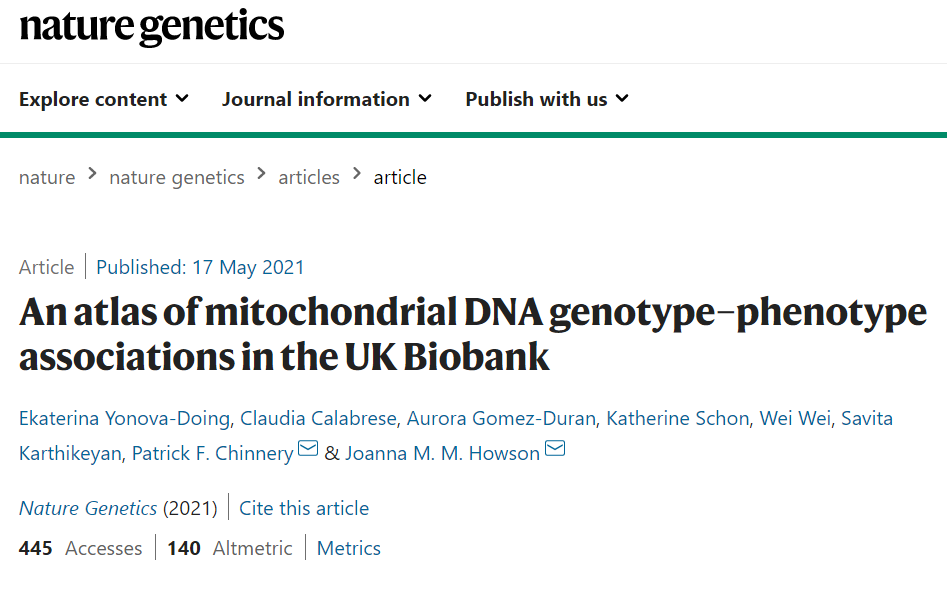 Regarding this research, Professor Howson said, “Except for mitochondrial diseases, we usually do not associate mitochondrial DNA mutations with common diseases. But now we have shown that human mitochondrial DNA inherited from mothers affects the risk of some diseases, such as Type 2 diabetes, multiple sclerosis, abdominal aortic aneurysm, etc.”

The structure of the human mitochondrial genome is very compact, consisting of only 16,569 base pairs, of which about 95% of the DNA sequence is used to encode 13 proteins, 22 transfer RNAs, and 2 ribosomal RNAs. These substances are mitochondrial oxidative phosphorylation and ATP. Substances necessary for production. Previous studies have shown that although mitochondrial DNA only accounts for 0.1% of the human genome, its abnormality may still cause some serious diseases.

In order to overcome this obstacle, the Cambridge University research team has developed a new model to study the relationship between mitochondrial DNA and human disease characteristics, and systematically analyzed the biological data of 358,000 volunteers in the British biological database.

The results found that mitochondrial DNA not only causes some rare diseases, but also has significant effects on common human diseases and characteristics such as type 2 diabetes, multiple sclerosis, liver and kidney function, abdominal aortic aneurysm, blood cell count, life span, and height. In fact, in this experiment, the researchers discovered a total of 260 new mitochondrial DNA-related phenotypes.

For example, ATP is produced by a group of proteins in the mitochondria. More than 100 proteins are involved in the entire ATP production process, of which 13 are encoded by mitochondrial DNA, and the rest are encoded by nuclear DNA. Therefore, the proteins in the ATP production process are actually produced by two different genomes, and they need to cooperate with each other in the cell.

Obviously, if the offspring inherited from the mother’s mitochondrial DNA and the father’s nuclear DNA are incompatible, then the production of mitochondrial ATP will definitely be affected, which may slowly but lastingly affect a person’s health and physiological condition. From an evolutionary perspective, this process is clearly unfavorable. Conversely, evolution may encourage more matching unions, which are healthier, live longer, and have an advantage in survival.

In recent years, mitochondrial transplantation therapy has gradually developed into a hot technology that allows scientists to replace defective mothers with mitochondria from donor mothers, thereby preventing their offspring from suffering from life-threatening mitochondrial diseases.

In this regard, Professor Chinnery, the corresponding author of this article, said, “It seems that our mitochondrial DNA matches our nuclear DNA to some extent. We can’t exchange mitochondrial DNA at will, just like we can’t do blood transfusion. Fortunately, at present Research teams have been exploring the feasibility of mitochondrial transplantation therapy.”

In general, this research has discovered for the first time the key role of mitochondrial DNA in a variety of common human diseases, which is essential for helping humans understand the genetic structure of mitochondria and the interaction with nuclear genetic material. The set of mitochondrial DNA mutation characteristics and related phenotypes provided in this study also lays the foundation for future mitochondrial genome research.