Nature Sub-Journal: Israeli scientists have found a way to extend lifespan by 30%, only by overexpressing 1 gene

Nature: Israeli scientists have found a way to extend lifespan by 30%.   Birth, old age, sickness and death are the laws of nature, and people will inevitably age, accompanied by a decline in health, a decline in energy stability, and an increase in vulnerability.

As we all know, throughout human life, the telomeres at the ends of chromosomes will continue to shorten as cells divide, just like a clock in life. When the telomeres are shortened to a certain extent, life will stop.

Just a few days ago, the journal Nature Communications published an international team’s research paper [1], which assessed the life limit of human beings to be 120-150 years through the Dynamic State of Organism Index (DOSI).

The highly conserved Sirtuin protein, nicotinamide adenine dinucleotide (NAD+) dependent protein deacylase and single ADP-ribosyl transferase have been in aging research for many years. In particular, SIRT6 deacylase can regulate aging and metabolism, but the specific mechanism is largely unknown.

The study showed that increasing the expression of SIRT6 gene can prolong the life span of mouse models by 30%, and further revealed that SIRT6 gene maintains old age by increasing liver gluconeogenesis-related gene expression, increasing de novo synthesis of NAD+, and promoting the release of glycerol from adipose tissue. The energy homeostasis at the time, promotes anti-aging and prolongs healthy lifespan.

First, the research team confirmed that overexpression of the SIRT6 gene in mice through transgene can significantly extend the life of the mice, and it is equally effective for male and female mice.

The research team performed a number of physiological tests in wild-type mice and mice overexpressing the SIRT6 gene, including in vivo multi-omics analysis and carbon-13 lactate tracking.

Gluconeogenesis is the process by which organisms convert a variety of non-sugar substances into glucose or glycogen.

The research team also found that aging animals lose the ability to produce energy quickly without external energy. Mice overexpressing the SIRT6 gene can produce glycogen energy from fat and lactic acid. In this way, they can produce sugar for muscle energy, especially for the brain. In fact, the physical response of SIRT6 activation is the same as that activated by a life-increasing diet. 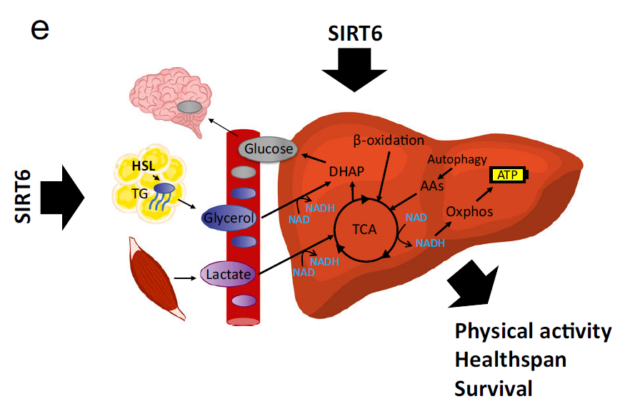 Haim Cohen, the corresponding author of the study, said that the combination of this first study and previous findings shows that the SIRT6 gene controls the speed of healthy aging. If it can be determined how to activate the SIRT6 gene in humans, it will be able to significantly extend human life. Comes great health and economic value. It is reported that Haim Cohen has already begun to study ways to extend healthy lifespan in response to this discovery.