Immune cells eliminate senescent cells and can extend the lifespan.

One of the important reasons for the human body to get sick after aging. At present, aging is an inevitable process of human beings. It is accompanied by aging. In addition to changes in appearance, there is also a decline in health-aging is a great threat to health. Most diseases are closely related to aging, no matter it is Cardiovascular disease is still cancer, and its occurrence and development are inseparable from aging.

There are many reasons why aging has such a great impact on health. One of them is that as the human body ages, a lot of senescent cells will be produced. These senescent cells take up a place and do not work. They can also affect the living environment of the cells in the body and cause various inflammations. Of course, under normal circumstances, the body’s immune cells can eliminate senescent cells, but with aging, the human body’s immune system will continue to decline, resulting in the body’s inability to eliminate immune cells. This is one of the important reasons for the human body to get sick after aging.

So if we revitalize immune cells and clear senescent cells again, can we help humans overcome some of the diseases caused by aging? The answer is certainly feasible. The content published in the latest issue of the “Cell” sub-Journal “Med” brought us the achievements of immune cells to eliminate senescent cells, and successfully reversed the many harms caused by aging. 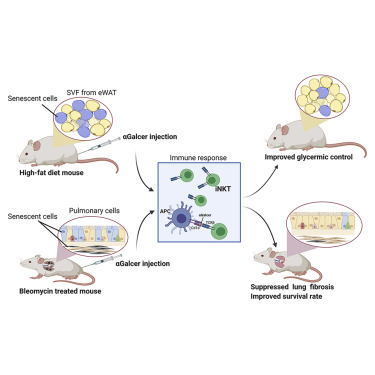 In the end, the researchers focused on a special type of immune cell, which is invariant Natural Killer T Cells (iNK cells). We are more familiar with NK cells, but iNK cells have very different characteristics from NK cells. iNK cells mainly have the following two characteristics, which makes them favored by researchers:

In order to further study the effect of iNK cells clearing senescent cells on human functions, the researchers turned their attention to another type of “terminal illness” that has a higher mortality rate than cancer-pulmonary fibrosis. The average survival time of patients with pulmonary fibrosis after diagnosis is only 2.8 years, and there is currently no optimal treatment.

Surprisingly, when the researchers used bleomycin to induce pulmonary fibrosis and caused the corresponding symptoms in the lungs of mice, and then used iNK cells to eliminate the cells associated with aging in the mouse model, the mice were damaged. The cells have been significantly reduced, and the life span of the mice has also been significantly extended! It can be said that it provides a potential hope for those patients who can only change their lungs after pulmonary fibrosis. 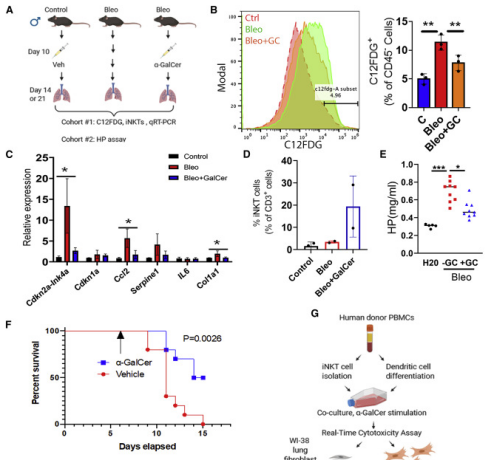 So for the human body, can iNK cells directly act on senescent cells? To put it simply, whether activated iNK cells will kill senescent cells (rather than normal cells) preferentially, so the researchers obtained peripheral blood cells from healthy people, separated and cultured them. In experiments, they found that iNK cells would Kill senescent cells first! This also laid a certain foundation for the further entry of this therapy into the clinic. 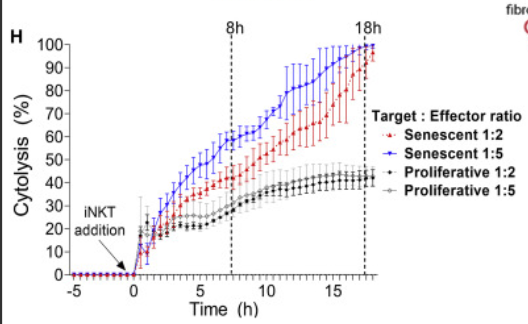 For aging, we still do not have a good way to contain it, but perhaps we can find the answer we want from the immune system. Similarly, as our understanding of the immune system becomes deeper and deeper, immunotherapy will not only be applied to cancer, but will also be applied to more health areas, including anti-aging, diabetes treatment, pulmonary fibrosis and other treatments.