Not much nonsense, this article published on May 12 in “Nature” once again refreshed our understanding of immune cells. At the beginning of the article, we first summarize the information of the article, and then we will take a closer look at the entire article. The content of the article:

Immune aging will lead to systemic aging-not only limited to immune organs, but also damage to non-immune organs; 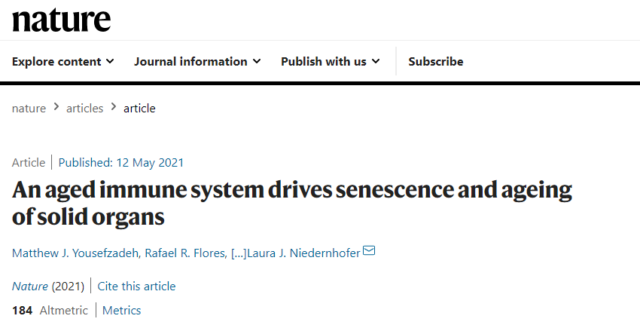 It can be said that this research has brought the importance of immune cells to human health to another level! This is also the first time that scientists have discovered the effect of immune cell aging on systemic aging-adding a rich touch to our fight against aging.

In fact, we have mentioned in many previous articles: Immune cells can eliminate senescent cells, but with the increase of age, the senescence of immune cells caused by the aging of the human body once again promotes the aging process. Let’s make an inaccurate analogy: It’s like multiple parts in a car. One of the parts is damaged, causing the damage of other parts to increase, and the damage of other parts will cause continuous damage to the part. This forms a negative, downward spiral, and eventually leads to the scrapping of the car-aging is such a similar negative cycle.

The study found that in addition to the immune organs, other organs of the mice also showed various DNA damage and aging, and the characteristics of the various organs of the mice were also biased towards the characteristics of aging-in other words, the mice that were immune to aging There are signs of aging all over the body, and obviously, the life span of mice has also shortened.

In addition, transplanting aging immune cells into aging mice will make the situation in these mice “worse worse”, aging is accelerated, and their life span is shorter.

Researchers transplanted normal, healthy, and young immune cells into mice whose immune cells were “aging before they were old” and found that the aging of many tissues and organs in the mouse body began to reverse, and related aging markers Significant reduction occurred.

In fact, as early as in previous studies, researchers have replaced the blood of young mice with old mice (immune cells in the peripheral blood will follow the blood to patrol around the body), and they found that aging mice are related to aging The characteristics have been significantly reduced. It can be said that keeping the immune cells young can help us maintain our youth to a great extent. In fact, there is already a relatively mature cell cryopreservation technology in the world, using liquid nitrogen as low as minus 196 degrees for cell cryopreservation, so as to preserve our young immune cells for future use when needed.