Cell: This newly discovered biomarker helps humans fight aging.  Longevity has always been the eternal desire of mankind. With the deepening of human cognition research on aging and death, longevity and longevity are gradually becoming reality.

Recently, researchers from the Buck Institute of Aging in the United States published a research paper titled Oxylipin biosynthesis reinforces cellular senescence and allows detection of senolysis on Cell Metabolism.

The study discovered a new, aging-related biomarker—Dihomo-15d-PGJ2. This type of substance usually accumulates in cells, but is released when senescent cells die and can be detected in urine and blood. .

Therefore, it can be used as a non-invasive test indicator to measure and track the effect of senescent cell elimination therapy-Senolytics. Senescent cells will continue to exist and continue to secrete many pro-inflammatory and tissue remodeling molecules to poison other surrounding cells. Not only that, but scientists have found through transcriptome analysis that, like cancer cells, senescent cells increase the expression of “pro-survival networks” to help them resist apoptosis or programmed cell death.

The James L. Kirkland team of the Mayo Clinic in the United States published a research paper titled: The Achilles’ heel of senescent cells: from transcriptome to senolytic drugs in Aging Cell in 2015, reporting a class of drugs that selectively kill senescent cells Combination-Senolytics.

The research team confirmed through cell experiments that the Senolytics therapy consisting of dasatinib and quercetin can selectively induce the death of senescent cells. Among them, dasatinib can eliminate aging human adipocyte progenitor cells, while quercetin can kill aging human endothelial cells and mouse bone marrow stem cells. The combination of the two has a stronger effect. 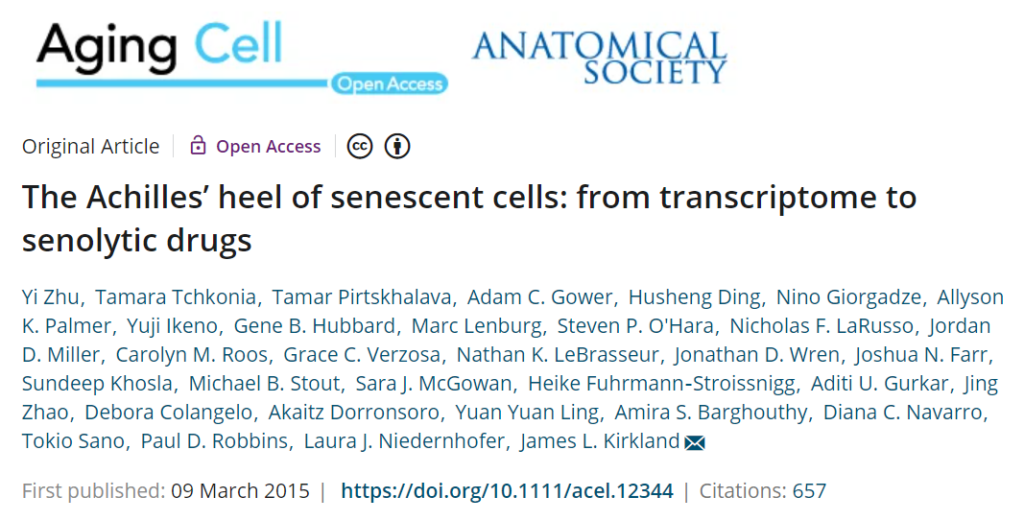 In this study of the Buck Institute, the research team first discovered that senescent cells also synthesize large amounts of oxidized lipids (Oxylipins), which are biologically active metabolites produced by the oxidation of polyunsaturated fatty acids. Prior to this, many studies focused on the protein component of the aging-related secretory phenotype (SASP), and the lipid composition of SASP has not been fully studied.

In fact, the research team has previously demonstrated that aging and SASP are related to significant changes in metabolism, including lipid metabolism, and free polyunsaturated fatty acids will accumulate in aging cells and be catabolized into Oxylipins. Through the lipid analysis of senescent cells, the researchers found that certain lipids increase or decrease significantly during the aging process, and most notably, the relative abundance of Oxylipins will increase significantly.

Oxylipins are a class of lipid signaling molecules derived from 20-carbon or 22-carbon fatty acids such as arachidonic acid. It has a variety of physiological effects, including inflammation, fever, vasomotor relaxation, pain, and asthma. In senescent cells, the biosynthesis of Oxylipins promotes the SASP phenotype and enhances the permanent growth arrest of senescent cells.

Not only that, the researchers also said that Dihomo-15d-PGJ2 has a functional role in the aging process. Inhibiting its synthesis can allow some cells to escape aging and continue to divide, and show less inflammatory SASP phenotype. On the contrary, adding Dihomo-15d-PGJ2 to normal cells will activate the RAS pathway and accelerate their senescence.

This means that Dihomo-15d-PGJ2 may be used as a new non-invasive biomarker to measure the effectiveness of Senolytics therapy. Professor Judith Campisi, the corresponding author of the study, said: “More and more biotechnology companies are competing to develop drugs to eliminate senescent cells. Although the field has a bright future, there is still a lack of simple biomarkers to measure and Track the efficacy of these treatments. We are very happy to bring Dihomo-15d-PGJ2, a new biomarker to this field, and look forward to its clinical application.”

All in all, the new non-invasive biomarker discovered in this study-Dihomo-15d-PGJ2, which can be used as a measure to eliminate senescent cells, broadening the way for the development of Senolytics therapy. At the same time, this study also reminds us that oxidized lipids (Oxylipin) will also participate in the aging process of cells, thus providing a new perspective for studying the pathology of aging!