The antigen-binding counterpart of CAR is the antibody fragment scFv (single chain variable fragment), which can recognize membrane proteins associated with cancer cells.

In this chapter, the use of human scFv phage display library as a source of new monoclonal antibodies against surface antigens is discussed.

A scheme of intensive use of the extracellular domain of surface proteins in the form of biotinylation was proposed as a selective antigen.

Describes elution with unlabeled peptides and selection in solution. It also outlines the use of NGS to analyze the enriched scFv during the entire selection process.

The chimeric protein associates the binding of a specific antigen with the activation signal in the cytoplasm of the T cell, thereby triggering an effector response to the antigen-carrying cell.

Choosing high-affinity antibodies against specific cancer antigens is one of the keys to an effective CAR-T system [4].

In this chapter, we discussed the use of phage display technology to isolate antibody coding sequences to be used in CAR expression vectors.

In 1985, George Smith, the 2018 Nobel Prize winner, published the first report on phage display technology, which can jointly select polypeptides and their respective coding genes [5].

Smith has proved that it is possible to clone foreign DNA fragments and fuse them with filamentous phage gene III to form a fusion that exhibits foreign origin at the N-terminus of protein III (the end of the phage capsid) protein.

Even if it contains foreign peptides, protein III can still maintain its physiological functions and retain the viability of bacteriophages [6].

In addition, this fusion allows the recombinant peptide to interact with the target and external ligands [7].

The display of the antibody library on phage is a powerful technique for separating anti-cancer antigen antibodies [8].

This method is particularly useful in the case of antibody combinatorial libraries, where the VH and VL coding regions are combined to encode millions of antibody fragments, scFv or Fabs, displayed on the surface of filamentous phage [9,10] .

In this case, each clone corresponds to a monoclonal antibody (mAb) fragment, which can be selected based on its specificity and affinity [11-13].

In such procedures, the focus is on the selection of antibodies that recognize human cancer antigens. The most common choice is the construction of naive libraries [14], because it is difficult to obtain antibodies against self-antigens.

These libraries are composed of the VH and VL genes of three or more individuals. In this case, new specificities will appear and further options can be made.

The success of the selection depends on two important steps: the initial conversion rate that determines the size of the library, and the selection procedure that can improve the specificity and facilitate the selection of higher affinity monoclonal antibodies. 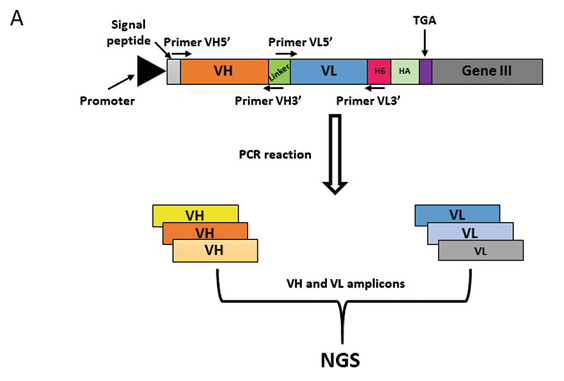 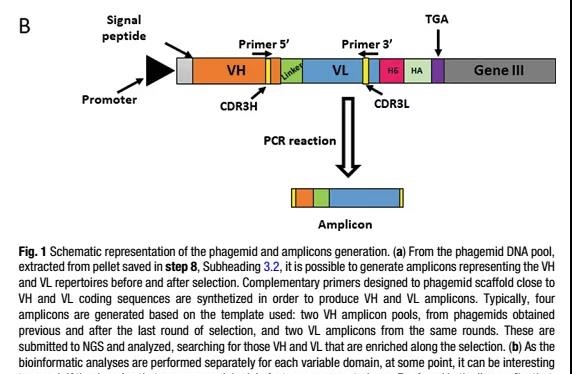 As the antigen recognition counterpart of CAR, the selection should be based on the ability of scFv to bind to the target cell membrane-associated protein.

Some strategies for selecting antibodies against cell surface proteins have been reported.

Among these methods, some protocols use cells incubated with phage display libraries for sorting [15].

Another method for isolating mAbs against cell surface proteins is by centrifugation of the immiscible organic lower part relative to the phage/cell suspension.

This method is called BRASIL (Biopanning and Rapid Analysis of Selective and Interactive Ligand ) [16, 17]. However, in both methods, any specific surface protein can drive selection, rather than a specific protein related to the tumor phenotype.

An alternative method is to use peptides representing the extracellular domain of surface cancer-associated proteins as immobilized antigens.

In this chapter, we recommend using this biotin-labeled peptide to facilitate its fixation or selection in solution.

Using this strategy, the bound phage can also be eluted with unlabeled peptides. This method should illustrate more specific scFv selection.

Together with these protocols, a procedure was proposed for generating amplicons of selected mAbs for sequencing the enriched VH and VL coding sequences by NGS (Next Generation Sequencing).