CAR-T cell therapy, the full name is Chimeric Antigen Receptor T-Cell Immunotherapy, refers to chimeric antigen receptor T-cell immunotherapy. To put it simply, the patient’s T cells are genetically engineered in vitro to make them recognize tumor cell surface antigens, and then these modified T cells are infused back into the patient to achieve the therapeutic effect of identifying and killing cancer cells.

On August 5, 2021, researchers from the University of Erlangen-Nuremberg in Germany published an article titled CD19-Targeted CAR T Cells in Refractory Systemic Lupus Erythematosus in the New England Journal of Medicine (NEJM).

The research team performed CAR-T cell therapy on a 20-year-old female patient with severe systemic lupus erythematosus. The therapy quickly relieved his condition without obvious side effects. This patient also became the first lupus patient in the world to receive CAR-T cell therapy.

The research team said that although it was only one patient, the test results showed that the CAR-T therapy responded quickly and the patient’s symptoms subsided quickly. The patient can be said to have “completely recovered” and has not needed treatment for more than four months. It is reported that the research team is now using CAR-T cells to treat two other patients with severe lupus erythematosus.

The research team published the results of this treatment in the New England Journal of Medicine (NEJM),

An untreated 20-year-old female patient suffers from severe systemic lupus erythematosus. Attacks from the autoimmune system have caused her to suffer from arthritis, kidney damage, and inflammation of the lungs and heart. The conventional treatment drugs are ineffective.

In desperation, the treatment team decided to try CAR-T cell therapy. Like the previous CAR-T cell therapy used for cancer treatment, the doctor collected the patient’s T cell samples and then genetically modified these T cells in the laboratory. , Allowing patients’ T cells to recognize the CD19 protein on B cells. B cells normally produce antibodies to help the body fight pathogen infections, but in lupus erythematosus, B cells produce antibodies that attack themselves.

The transformed T cells were infused back into the patient. After 44 days, the antibodies that attacked her body disappeared, her condition was significantly alleviated, and there were no obvious side effects. 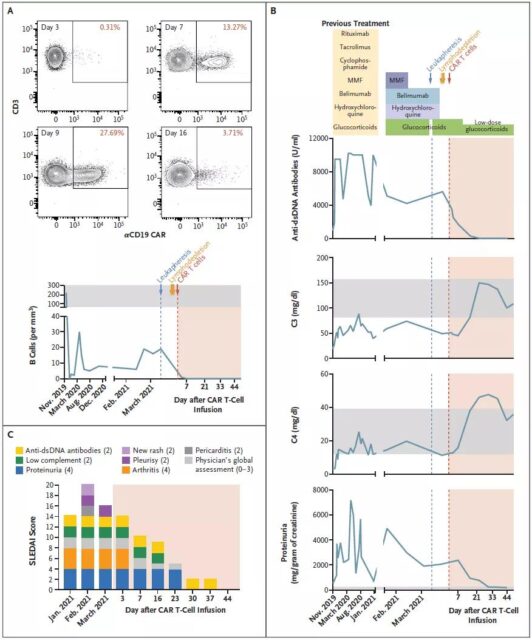