Radiotherapy uses ionizing radiation to destroy the DNA in the cell nucleus, so that the cell loses the ability to proliferate, and achieves the purpose of killing tumor cells.

Radiotherapy uses ionizing radiation to destroy the DNA in the cell nucleus, so that the cell loses the ability to proliferate, and achieves the purpose of killing tumor cells.

However, during radiotherapy, while the radiation is irradiating the tumor cells, the normal tissues around the tumor cells are also irradiated to varying degrees, causing some adverse reactions, which require symptomatic treatment. Most cases are controllable, and a few severe cases require suspension. Radiation therapy or give up radiation therapy.

In reality, unlike surgical treatment, cancer patients are still very repulsive of radiotherapy. Not everyone is willing to receive radiotherapy to alleviate the condition or even get a chance of cure. The fear of radiotherapy is mostly caused by radiation damage caused by radiotherapy, such as scorched skin, damage to salivary glands, loss of taste and smell, loss of sexual function, skin rash, headache…

Therefore, proton therapy, a high-end radiotherapy method, came into being.

What is proton therapy?

Non-invasive and painless, the patient only needs to lie on the bed and receive a kind of magical radiation to accurately “blast” the cancer cells; each treatment process does not exceed 30 minutes, after the treatment is over, the patient can leave without affecting daily life Living, the survival rate within five years is about 90%, and the side effects of treatment are greatly reduced…

Have you heard of this way of fighting cancer? This is not an exaggeration. In fact, proton therapy, as a “rookie” in the entire field of radiotherapy, is recognized because it can significantly increase the killing effect on tumors and reduce the side effects of traditional radiotherapy on normal tissues and organs. The current cutting-edge radiotherapy technology also shines in the entire tumor treatment industry!

Proton therapy is a powerful and safe alternative therapy that can enable more children to benefit from radiation therapy. As a particle with a positively charged nucleus, protons enter the human body at a very high speed. Because of their high speed, the chance of interacting with normal tissues or cells in the body is extremely low. When they reach a specific part of a cancer cell, the speed suddenly decreases and Stop, release maximum energy (produce Bragg peak), kill cancer cells.

In fact, many international clinical studies have also reported that proton therapy has significant clinical effects in the treatment of brain tumors.

Radiation therapy can increase the risk of heart-related complications. According to a 2018 systematic review, proton therapy has a lower risk of these complications because it radiates less to the heart compared to standard photon radiotherapy.

The benefits of proton therapy for breast cancer 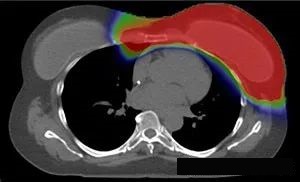 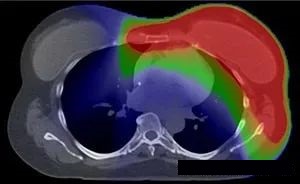 The pictures are proton therapy followed by conventional X-ray therapy

Proton therapy provides a new non-surgical treatment method for lung cancer patients, which is suitable for lung cancer patients at all stages, and is different from traditional high-energy X-ray radiation (or photons). Due to the unique characteristics of proton therapy, it can provide a specific depth of radiation dose and then suddenly stop, no more radiation dose behind. X-ray radiation treatment will continue to penetrate normal tissues and organs (such as the lungs, heart, esophagus and spinal cord), causing damage and toxicity.

Below is a comparison of the IMRT plan (left) and the proton treatment plan (right) for the same patient. The degree of color gradient represents different radiation doses, high doses of red, medium doses of yellow and green, and low doses of blue. 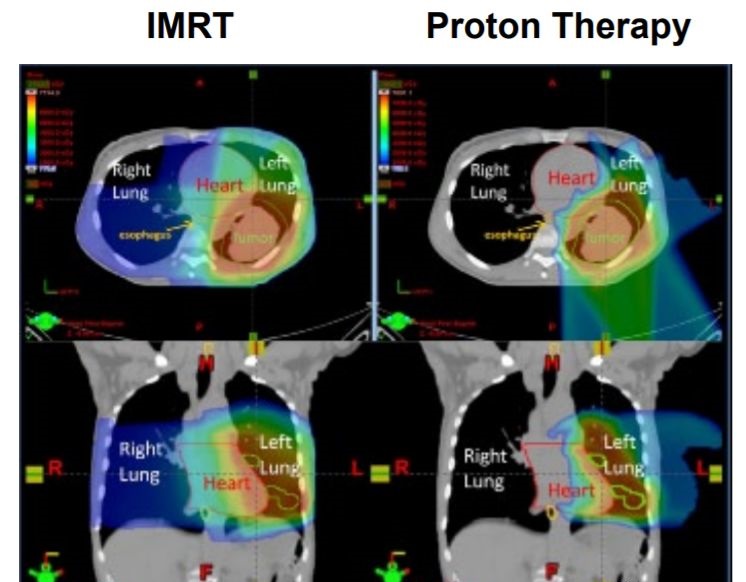 For this patient, compared to X-ray radiotherapy, the proton plan significantly reduced the radiation dose to healthy tissues surrounding the tumor, such as the right lung, esophagus, and heart. Low doses to these areas will reduce radiation-induced pneumonia, painful swallowing, and the risk of heart disease.

According to an article published in the journal “Gastrointestinal Oncology” on the dose advantages of various radiotherapy techniques in the treatment of patients with esophageal cancer, IMRT improves the dose distribution of organs compared with 3D conformal radiotherapy (3DCRT); treatment plan and The comparative study of dosimetry further shows that compared with 3DCRT and IMRT, proton therapy can significantly reduce the radiation dose to the heart and lungs.

Proton therapy can protect the front tissue of the heart to the greatest extent and reduce the radiation dose to the heart, which has obvious clinical advantages. 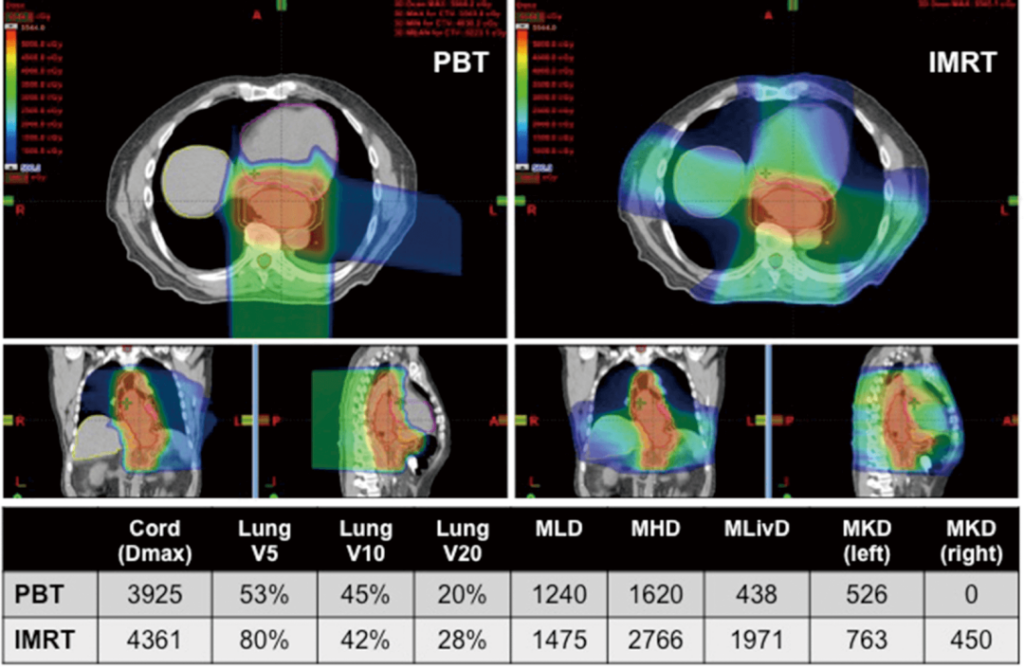