The 1-year overall survival rate of proton therapy is 66.7%, and its strength overwhelms traditional radiotherapy!

In addition, the incidence of treatment-related pulmonary complications is reported to be low in proton therapy patients. The research was published in the journal Radiation Oncology.

Idiopathic pulmonary fibrosis in patients with early-stage non-small cell lung cancer can increase the chance of pulmonary complications in cancer treatment after radiotherapy.

To solve this problem, researchers at Samsung Medical Center, Sungkyunkwan University School of Medicine in Seoul, South Korea reviewed the medical records of patients with non-small cell lung cancer with basic IPF to compare the effects of X-ray radiotherapy and proton radiotherapy on overall survival.

The 1-year overall survival rate of proton therapy is 66.7%, and its strength overwhelms traditional radiotherapy!

The study evaluated 264 patients with early stage (I and II) non-small cell lung cancer who received radiotherapy at Samsung Medical Center between January 2010 and October 2017.

All 4 treatment-related deaths occurred in the X-ray treatment group, accounting for 18.2% of the 22 patients.

Similarly, the one-year overall survival rate of proton therapy patients was 66.7%, and that of patients receiving X-ray radiation therapy was 46.4%.

IPF classification is classified into GAP stage according to age, gender and lung function status. There are three GAP stages-the higher the stage, the more severe the condition and the worse the prognosis. The results showed that the one-year overall survival rate (50%) of GAP stage II and III patients who received proton therapy was significantly better than that of X-ray patients (26.4%).

Compared with the X-ray group, the incidence of treatment-related pulmonary complications was higher (40.9%) and the proton radiation therapy group (12.5%), but this difference was not statistically significant.

The researchers pointed out that no matter what kind of radiation therapy is used, most patients have treatment-related pulmonary complications within a month that are fatal.

“Radiation therapy is associated with serious treatment-related complications in IPF patients,” but “proton therapy may help reduce these acute and fatal complications,” the researchers concluded.

What kind of “black technology” is proton therapy?

Proton therapy is to use a cyclotron or synchrotron to accelerate the hydrogen atom nucleus (proton) that has lost electrons to about 70% of the speed of light. After being accelerated by the accelerator, the positively charged proton becomes a very penetrating ionizing radiation.

It enters the human body at a very high speed, is guided by a special-shaped device, and finally reaches the targeted tumor site. Because of its high speed, the chance of interacting with normal tissues or cells in the body is extremely low. When it reaches a specific part of the tumor, the speed suddenly decreases and stops, releasing the maximum energy, generating the “Bragg Peak”, which can kill the cancer cells. , Without causing damage to surrounding tissues and organs. Proton therapy provides a new non-surgical treatment method for lung cancer patients, which is suitable for lung cancer patients at all stages, and is different from traditional high-energy X-ray radiation (or photons). Due to the unique characteristics of proton therapy, it can provide a specific depth of radiation dose and then suddenly stop, no more radiation dose behind. X-ray radiation treatment will continue to penetrate normal tissues and organs (such as the lungs, heart, esophagus and spinal cord), causing damage and toxicity.

Below is a comparison of the IMRT plan (left) and the proton treatment plan (right) for the same patient. The degree of color gradient represents different radiation doses, high doses of red, medium doses of yellow and green, and low doses of blue. 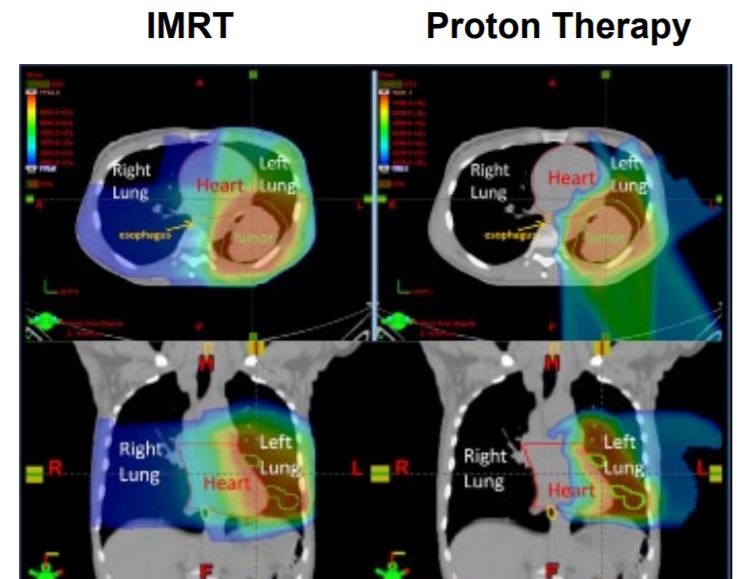 For this patient, compared to X-ray radiotherapy, the proton plan significantly reduced the radiation dose to healthy tissues surrounding the tumor, such as the right lung, esophagus, and heart. Low doses to these areas will reduce radiation-induced pneumonia, painful swallowing, and the risk of heart disease.