The latest data shows that among patients with advanced non-small cell lung cancer (NSCLC) with high PD-L1 expression, the 5-year overall survival (OS) rate of patients receiving pembrolizumab (Keytruda) is twice that of the chemotherapy group (31.9% vs 16.3%), the median overall survival time was nearly doubled (26.3 months vs 13.4 months), and pembrolizumab significantly reduced the risk of death by 38% (HR 0.62, 95% CI 0.48-0.81) .

The research team pointed out in the paper that this is the first 5-year follow-up data of a Phase 3 trial of immunotherapy for the first-line treatment of NSCLC.

These latest data confirm and strengthen the previously reported 3-year survival results, and are also consistent with the findings of the KEYNOTE-001 trial (Phase Ib).

The KEYNOTE-024 trial was carried out in patients with metastatic non-small cell lung cancer (NSCLC) with PD-L1 TPS (tumor proportion score) ≥50% and no EGFR or ALK mutations, comparing pembrolizumab and platinum-containing chemotherapy as first-line The effect of treatment.

A total of 305 patients were randomized 1:1 to receive treatment. The primary endpoint of the trial is progression-free survival (PFS), and OS is the key secondary endpoint. The median follow-up time for this data analysis was as long as 59.9 months.

In the survival data of this key report, in addition to the doubling of the median overall survival and the 5-year overall survival rate, the paper specifically pointed out that although two-thirds of the chemotherapy group (99/151) patients eventually crossed the group Received immunotherapy, but pembrolizumab still showed a significant survival benefit advantage.

One of the authors of the study, Dr. Martin Reck from the Grosshansdorf Lung Center in Germany, pointed out that pembrolizumab may actually have higher therapeutic advantages over chemotherapy. “Immunotherapy drugs (including pembrolizumab) have been shown to be able to be used in the second line Treatment improves OS better than chemotherapy. 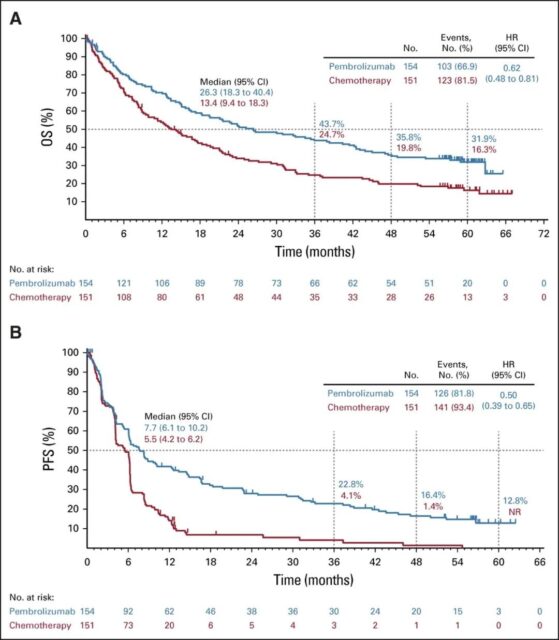 Pembrolizumab is also more advantageous in multiple other endpoints. The median PFS of pembrolizumab was 7.7 months and that of the chemotherapy group was 5.5 months (P<0.001). Pembrolizumab significantly reduced the risk of disease progression or death by 50%.

In addition, the objective response rate assessed by the investigator in the pembrolizumab group was higher (46.1% vs 31.1%), and the median response time was longer (29.1 vs 6.3 months).

In the longer follow-up, the research team did not observe new safety signals. In each treatment group, the incidence of treatment-related adverse events (TRAE), severe TRAE, and fatal TRAE (2 cases in the pembrolizumab group and 3 cases in the chemotherapy group) was similar.

The paper concluded that in the first-line treatment of 50% of PD-L1 metastatic NSCLC, pembrolizumab provides long-lasting and clinically significant long-term survival benefits compared to chemotherapy, and has become the standard treatment for these patients .

Dr. Roy Herbst from the Yale Cancer Center commented that the impact of immunotherapy on lung cancer survival is “surprising.” Follow-up research should focus on “personalized” immunotherapy, just like personalized targeted therapy, allowing immunotherapy to be more extensive Play a role in patients, “so we can help the remaining 70% of patients who have not survived for 5 years.”