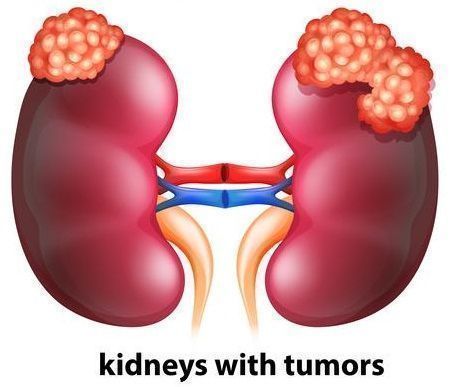 The results of this update represent the longest follow-up time of any phase 3 clinical trial of the first-line RCC immune combination therapy. After a median follow-up of 67.7 months, the data continue to prove that in the primary endpoint population (patients with intermediate and high-risk [IP] prognostic factors) and the entire study population (all randomized populations, that is, the intention-to-treat population [ITT]) , OY combination maintains overall survival (OS) and remission benefits that are superior to the targeted anticancer drug Sutent (common name: sunitinib).

Dr. Nick Botwood, Vice President of Oncology Development at Bristol-Myers Squibb, said: “Four years ago, we showed the first results of the CheckMate-214 trial during ESMO, which helped change the standard of care for advanced renal cell carcinoma.
Now, with the longest follow-up of any phase 3 trial of immune combination therapy in this disease, we see the true long-term survival benefits of Opdivo and Yervoy.

The results of these five-year RCC studies supplement the evidence we have seen in several other tumor types, that is, Opdivo+Yervoy-based combination therapy can play a unique role in changing the survival outcomes of cancer patients. “ 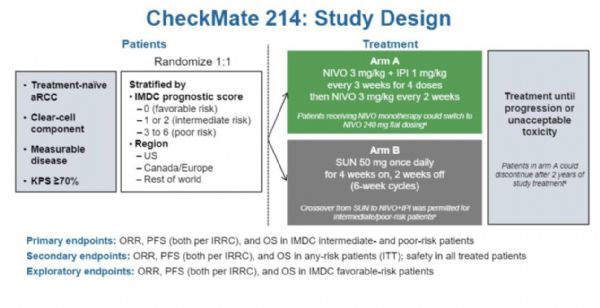 The 67.7-month follow-up analysis in the IP patient population (n=847) showed that compared with the Sutent group, the OY group showed significant improvement in the following endpoints:

(4) In terms of DOR, the median DOR in the OY group has not yet been reached, and it was 19.7 months in the Sutent treatment group.

In the study, the safety profile of Opdivo+Yervoy immune combination therapy is manageable using established treatment algorithms, and there are no new safety signals during long-term follow-up.

The 5-year data from the CheckMate-214 clinical trial provided during ESMO also includes a conditional survival analysis, which estimates the probability that a patient will remain event-free (ie, remain alive, disease-free, and in remission) for a period of time after reaching the treatment milestone.

The key results include:

(1) Among patients who survived 3 years after starting the OY combination therapy, there is an 81% probability that they will continue to survive in the next 2 years, while the probability for patients who receive Sutent is 72%.

(2) Among patients who received OY combination therapy for 3 years without progression, there is an 89% probability that they will not progress within the next 2 years, while the probability of patients receiving Sutent therapy is 57%.

Renal cell carcinoma (RCC) is the most common type of kidney cancer in adults. There are more than 431,000 new cases and more than 179,000 deaths worldwide each year. The incidence of RCC in men is approximately twice that of women, with the highest incidence in North America and Europe. From historical data, the 5-year survival rate for patients diagnosed with metastatic or advanced renal cancer is only 13%.

Both Opdivo and Yervoy are tumor immunotherapy. They use the body’s own immune system to fight tumors by targeting different regulatory elements in the immune system. Opdivo targets the PD-1/PD-L1 pathway, and Yervoy targets it. CTLA-4.

Opdivo+Yervoy (OY combination) is the first and only dual immunotherapy to receive regulatory approval.

Opdivo+Yervoy is a unique combination of two immune checkpoint inhibitors, with a potential synergistic mechanism. It targets two different checkpoints (PD-1 and CTLA-4) and acts in a complementary way to help the body destroy tumors. cell.

Up to now, the Opdivo+Yervoy combination therapy has been approved for 7 treatment indications for 6 types of cancer (melanoma, renal cell carcinoma, colorectal cancer, hepatocellular carcinoma, non-small cell lung cancer, malignant pleural mesothelioma) in different countries It is different from the region.

In addition, the Opdivo+Yervoy combination therapy has shown significant improvement in overall survival (OS) in 6 phase 3 clinical trials of 5 cancers: