Stem cell therapy treats fetal diseases before birth!. Before a baby is born, when the fetus is undergoing rapid developmental changes, it is very likely to contract certain genetic diseases at an early stage.

According to Singularityhub, before Elianna Constantino (Elianna Constantino) was born, she had suspended her death in her mother’s body. Elianna suffers from a rare inherited blood disease called thalassemia (alpha thalassemia major), which prevents the normal formation of red blood cells. There is no cure for this disease and it is usually fatal to the developing fetus.

But while in her mother’s womb, Elianna received a very bold treatment. The doctors isolated healthy stem cells from her mother and injected them through a blood vessel in the umbilical cord. Four months later, when Elianna was born, she cried loudly, her hair gleaming, she didn’t look like she was sick at all. Eliana is the first clinical trial pioneer to break the boundaries of stem cell transplantation. Led by Tippi MacKenzie, a pediatrician and fetal surgeon at UCSF Benioff Children’s Hospital, this bold experiment raises a question: if we can What will happen if patients with genetic diseases are cured before they are born?

Mackenzie’s experiment is not entirely new. Since the 1990s, doctors have wondered whether it is possible to transplant a fetus with stem cells before it is born. Many inherited blood diseases can be cured in this way, including thalassemia and sickle cell disease. In sickle cell disease, red blood cells grow into sharp sickle shapes, which damage blood vessels and prevent effective oxygen delivery.

The idea of ​​treating the fetus in the mother’s womb is very radical. For a long time, doctors have always believed that the fetus is wrapped in an impermeable protective barrier, which helps protect the developing humans from external harm. Early embryonic stem cell transplant experiments seemed to support this belief. Most trials using father’s stem cells have failed, which makes doctors believe that this operation is impossible. But then the study of animals found a key message: the mother’s immune system is rejecting the father’s stem cells, not the fetus itself.

Other studies have shown that the fetus is not completely isolated, but constantly exchanges cells with the mother, so that the fetal cells can actually be separated from the mother’s blood. The reason for this is to keep the immune systems of both parties in balance. Because the fetus has part of the father’s DNA, for the mother, this part of the cell belongs to outsiders. This transmission of cells back and forth “taught” the mother and fetus’s immune systems to calm down: even if these cells are not perfectly matched with genes, the fetal cells can tolerate the mother’s cells and vice versa. In this way, during pregnancy, the fetus’s immune system will fight against the mother.

Once the child is born, this “harmonious truce” will change. The child’s immune system will work and attack any cells that are not related to the body. After birth, bone marrow transplantation requires the use of drugs to kill the baby’s own bone marrow cells in order to make room for healthy bone marrow cells. It also requires high doses of immunosuppressive drugs to control the baby’s immune system to support new healthy cells to function. Obviously, this treatment is extremely dangerous for newborns. Due to the high fatality rate, many pregnant parents can choose to terminate their pregnancy if the child has hereditary blood-based diseases, such as thalassemia.

But animal studies also offer a silver lining: fetuses are the perfect candidates for stem cell transplantation. And their mother, if healthy enough, is a perfect donor. Eighteen weeks after Elianna was born, the parents discovered that their child had a problem. Ultrasonography revealed that her heart had doubled, twice its normal size, and fluid structures appeared in her lungs and other organs. Elianna’s brain seems to lack oxygen, although blood flows through this organ at an abnormal rate. All signs indicate that she suffers from thalassemia.

The treatment options are very limited. Elianna can receive a blood transfusion to replace her malformed red blood cells, which carry oxygen across the body. If she was born alive, she would need blood transfusions to sustain her life. Even so, the risk of major damage to the brain is high. But there is a silver lining: Elianna’s mother has a healthy copy of the gene for thalassemia. Thalassemia includes two main genes, each of which has two copies. To express symptoms, all four copies must be bad. Because the mother has a healthy copy, her stem cells are also healthy, and theoretically can produce normal functioning red blood cells for her fetus.

The research team collected bone marrow samples from Elianna’s mother and isolated stem cells. These cells may become any kind of blood cells. During the blood transfusion, approximately 50 million healthy cells were injected into the umbilical vein through the mother’s abdomen. Once released, these cells can participate in blood circulation and develop into healthy, mature blood cells. This is a huge number, but for good reason. Stem cells gather in the bone marrow like small torpedoes. The more cells transplanted, the more likely the mother’s healthy stem cells will reject defective fetal cells.

After three more blood transfusions in the next few months, Eliana was born unexpectedly. Mackenzie was extremely excited. She explained: “This is the first time we have used high-dose maternal cells directly implanted in fetal blood.” Coupled with three blood transfusions, it may bring a higher chance of success. Currently, the research team does not know whether Elianna has fully recovered. So far, she still needs a blood transfusion every three weeks, but the research team found her mother’s stem cells in her blood.

The next step is to see if the mother’s cells will be permanently embedded in the child’s bone marrow, which is called “transplantation” in medicine. Researchers also want to know whether these cells can produce healthy blood cells in a child’s life. But the first phase of the trial has been successful, and neither the mother nor Eliana seems to have any side effects, such as immune responses. Mackenzie said excitedly: “I’m glad it is safe and feasible.”

The researchers plan to continue to optimize the treatment plan to maximize the chance of successful stem cell transplantation. Mackenzie said: “If we find that this is safe and effective for the treatment of thalassemia, we hope to apply it to many other blood diseases, the most common of which is sickle cell disease.” She added that anyway, We need to make everyone understand that fetal infusion for thalassemia is a life-saving method. 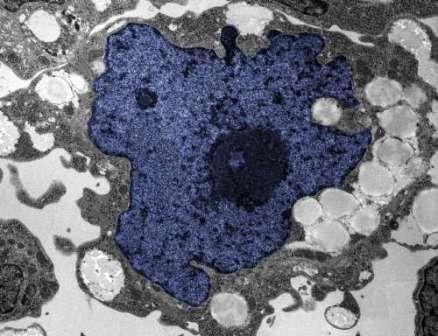 The Mackenzie experiment is just an example of how fast fetal medicine (which was once considered impossible) has progressed. Earlier this year, a research team succeeded in protecting three children from a genetic disease that causes newborns to lose sweat glands. In this case, the fetus is injected with a protein that their body cannot make on their own. Although this protein drug does not work for the baby, it allows the fetus to develop sweat glands, which are essential for maintaining body temperature.