However, after suffering from non-Hodgkin’s lymphoma, such a 70-year-old man suffered multiple recurrences and was difficult to heal. After undergoing chemotherapy, coupled with his older age, the treatment effect was often not satisfactory.

When the mountains were exhausted, he did not give up any opportunity for treatment. Finally, after receiving chimeric antigen receptor T (CAR-T) cell therapy for 1 month, the tumor was completely remitted and performed well after 18 months.

Now he seems to be reborn. The 73-year-old can still take his wife to travel and enjoy life!

Jalbert and his wife on the journey after being reborn

70-year-old man suffered from lymphoma, but it relapsed after exhausting all the options!

Jalbert never dreamed that God made a joke when he was 70 years old, and he suffered from non-Hodgkin’s lymphoma (NHL). After he was diagnosed with cancer in September 2015, he tried many treatments.

At first, he used chemotherapy under the advice of a local oncologist in Maine, USA, and achieved good results, but unfortunately, he relapsed again 6 months later!

The local doctor referred him to Odejide, MD, and prepared him to receive autologous stem cell transplantation. However, after undergoing this difficult operation and returning to his hometown to recuperate for a year, in October 2017, Jarbert’s The nightmare came again, and he felt a lump under his jawbone. The biopsy confirmed that his cancer had come back again!

He was reborn, and his tumor was completely relieved after CAR-T therapy!

Just when Jarbert thought he had exhausted all the treatments and had nothing to do, by chance, he saw a report on the TV news:
“They interviewed a patient with the same diagnosis as him, and he was mowing the lawn and planning to take his grandson to ski. He was in great condition. The news mentioned a treatment called CAR-T cell therapy.”

Jarbert recalled: “I didn’t know anything about this therapy, and the local Maine doctor had never heard of it. He suggested that I call Dr. Odejide at Dana Farber for consultation.”

Soon after, Jarbert came to learn about the process of CAR-T cell therapy in person. In December 2017, he collected peripheral blood to extract T cells and sent it to California for genetic modification, and then re-infused it into his blood in January 2018. In late February, Jarbert returned to his hometown of Maine, able to take care of the housework of taking care of his grandchildren.

Fortunately, Dr. Odejide revealed that Jarbert’s cancer recurrence occurred within a few days of FDA approval of CAR-T cells for relapsed/refractory diffuse large B-cell lymphoma, based on an unprecedented 82% response rate. After receiving CAR-T cell therapy for 1 month, the doctor determined that his tumor has completely resolved and continued to perform well when he reviewed it 18 months later. 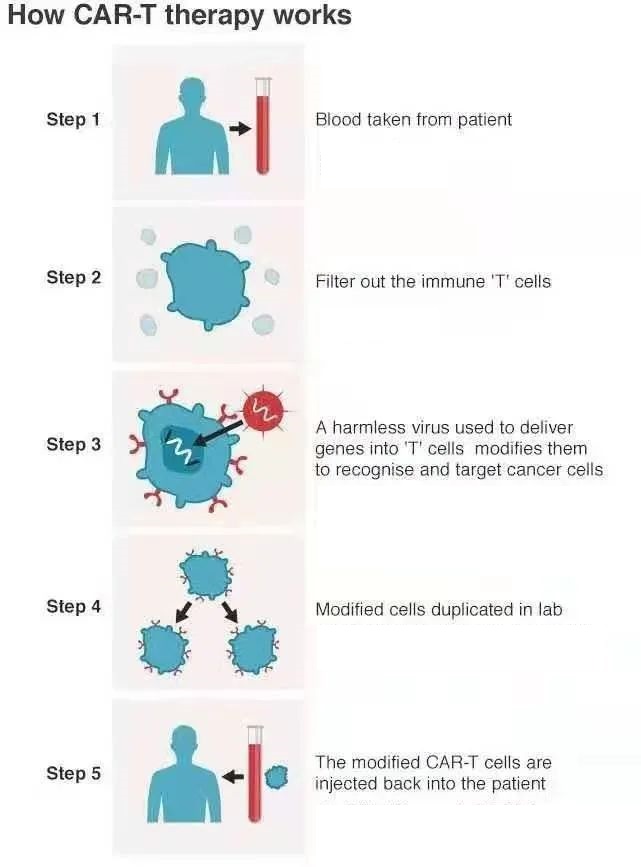 When it comes to the famous CAR-T, almost no one knows now. CAR-T is a “curative” anti-cancer therapy that has emerged in the past two years. At present, the principles of the three CAR-T approved by the FDA are to genetically modify the patient’s T cells to express a chimeric antigen receptor (CAR) designed to target the antigen CD19, which is expressed in a variety of hematological tumors. Antigenic proteins on the cell surface, including B-cell lymphoma and leukemia cells.

For example, if T cells are an “ordinary army”, then CAR-T cells are a “special force” with GPS, which can accurately locate and destroy the “enemy army”, that is, tumor cells. , To achieve targeted therapy for patients. At present, the technology has reached the domestic leading and international first-class level.

The research of CAR-T therapy in the treatment of hematological tumors has been very mature, especially bringing hope of rebirth to patients with hematological malignancies.