Follicular lymphoma is one of the most effective malignant tumors for chemotherapy and radiotherapy.

The old man in the photo is embracing his two newborn grandchildren, his face is red, and he is enjoying his days, so uncomfortable. But you can think of him having experienced a huge life change-cancer.

When these four words are linked together, anyone may buzz their heads, and there is darkness in front of them. “Don’t give up! Some cancers, even in their advanced stages, may be cured!” This is the only insight of Ken Carnes, who was reborn after the catastrophe!

Ken Karnes discovered swollen lymph nodes in March 2017, but his disease progressed when the doctor explored the cause. Neither steroids nor antibiotics could solve the problem. Only Lyme disease was ruled out. In the end, Karnes was diagnosed with follicular lymphoma after a biopsy.

Even though follicular lymphoma is a slow-growing cancer of the lymphatic system, it did not slow down the progression of Karnes’ tumor. He received 6 chemotherapy treatments within 6 months, and fortunately he fully recovered. However, when he thought he was out of the predicament, his nightmare struck again—relapse!

“That’s when I realized I needed an expert,” Karnes said.

He participated in one of the clinical trials of CAR-T therapy in the treatment of follicular lymphoma at the Dana Faberge Brigham Women’s Cancer Center. It is a cell therapy that uses the patient’s own immune system cells to fight cancer. The process involves taking a specific set of cells from the blood, modifying them in the laboratory to enhance the immune system’s natural response to cancer, and then reinjecting them into the patient’s body. The results of the experiment are amazing!

Of the 146 patients who participated in the trial, 92% of the patients had detected tumor shrinkage. Karnes’ tumor is in complete remission again!

He received CAR-T cell therapy from July 2019, after 18 months of treatment, and is still in complete remission.

“For those patients who have no other treatment options, the high response rate of CAR-T cell therapy can change lives,” said Armand, a member of the research team. For others, such as Carnes, the corresponding durability is the most surprising. Although it cannot be said that these patients have been cured, it has been seen that the level of progression-free survival is full of hope!

T cells (T lymphocytes) play the role of “warriors” in the human body and are responsible for resisting and eliminating “enemy” such as infections, tumors, and foreign objects.

T cells are activated through genetic engineering technology and installed with a “positioning navigation device” CAR, which specifically recognizes tumor cells in the body, and releases a variety of effectors through immunity to effectively kill tumor cells, thereby achieving the goal of treating malignant tumors. 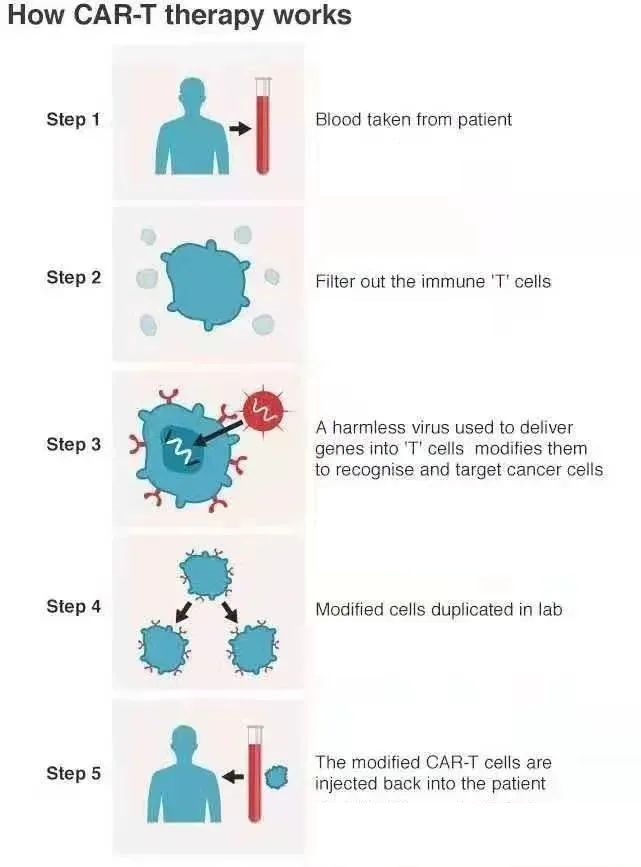 74% of patients have sustained remission for over 18 months! CAR-T Therapy Takes Another City

The clinical trial that Karnes tried above uses the CAR-T therapy Yescarta. What is exciting is that just recently, Kite Pharma announced that the US FDA has accelerated the approval of the CAR-T therapy Yescarta to expand the indications for the treatment of relapsed/refractory Adult patients with follicular lymphoma (FL). They have received at least two systemic treatments. The press release stated that this is the first CAR-T cell therapy approved for the treatment of patients with indolent follicular lymphoma.

This approval is based on the results of a single-arm, open-label study called ZUMA-5. The results of the trial showed that 91% of patients with relapsed/refractory follicular lymphoma responded to Yescarta, and 74% of them were in continuous remission after receiving treatment for 18 months. At a median follow-up time of 14.5 months, the median remission time has not yet been reached.

Follicular lymphoma accounts for 22% of non-Hodgkin’s lymphoma worldwide, and 30% of NHL in the United States. Its most common manifestation is painless lymphadenopathy, which typically manifests as multi-site lymphatic tissue invasion, sometimes Palpable lymph nodes on the pulley are swollen.

Follicular lymphoma is one of the most effective malignant tumors for chemotherapy and radiotherapy. About 25% of patients can experience spontaneous remission-often temporary. In recent years, cellular immunotherapy (especially CAR-T therapy) can produce a high complete remission rate in patients with relapsed follicular lymphoma, and can produce long-term remission.

In the face of cancer cells, the pace of human research will not stop. Whether it is hematological tumors or solid tumors, CAR-T therapy can play its advantages and achieve precise treatment, which is expected to bring breakthroughs to all cancers. In addition to hematological tumors, CAR-T cell therapy is also constantly expanding the treatment path, and recent breakthroughs have been made in the research of ovarian cancer and liver cancer.