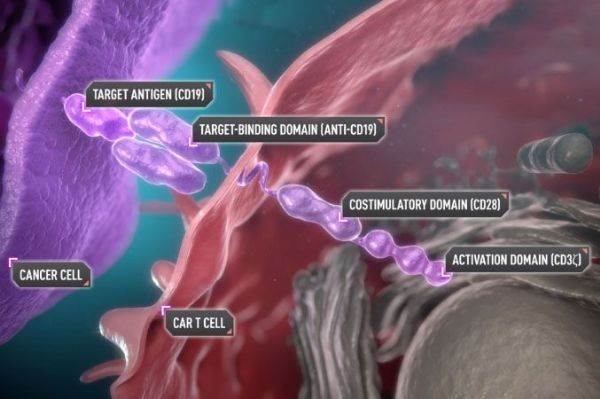 Because the cancer recurs or becomes ineffective to treatment options, approximately 40% of LBCL patients require second-line treatment. The standard care of second-line R/R LBCL is divided into two steps: re-introduction of immunochemotherapy, if the patient responds and can tolerate further treatment, continue with high-dose chemotherapy and stem cell transplantation.

The results announced this time represent the longest follow-up time for second-line R/R LBCL, with a median follow-up time of 2 years. The results showed that the study reached the primary endpoint of event-free survival (EFS): Yescarta showed superiority in the treatment of second-line R/R LBCL compared with SOC, improving EFS by 60% (HR=0.398, p<0.0001). In addition, the study also reached the key secondary endpoint of objective response rate (ORR). The interim analysis of overall survival (OS) shows a trend in favor of Yescarta, but the current data is not yet mature, and further analysis is planned in the future.

In this study, event-free survival (EFS) was defined as the time from randomization to disease progression, starting new lymphoma treatment, or death from any cause. The ZUMA-7 study was carried out under a special agreement (SPA) with the US FDA, according to which the trial design, clinical endpoints and statistical analysis were agreed with the FDA in advance.

The milestone ZUMA-7 study was launched in 2017 as the first randomized clinical trial to test whether the early use of CAR-T cell therapy is better than standard care (SOC). The results confirmed that in the second-line treatment of relapsed or refractory LBCL, Yescarta showed a highly statistically significant and clinically significant improvement compared with SOC.

The safety results of this study are consistent with or lower than the known safety of Yescarta’s third-line treatment of LBCL. 6% of patients had Grade 3 or higher cytokine release syndrome (CRS), with a median onset time of 3 days, and 21% of patients had Grade 3 or higher neurological events (NE). No new safety issues were found in the second-line treatment.

The detailed results of the ZUMA-7 study will be announced at a future medical conference. Kate Pharmaceuticals plans to discuss the submission of a supplementary application with the US FDA, EU EMA and other global regulatory agencies to expand the currently approved Yescarta indications. Currently, Yescarta has not been approved by any regulatory agency for the treatment of second-line R/R LBCL patients similar to the ZUMA-7 study.

Frederick L. Locke, the lead researcher of the ZUMA-7 study and co-leader of the immuno-oncology program at Moffett Cancer Center in Tampa, Florida, said: “The top-line results of the randomized ZUMA-7 study depict a potential paradigm shift in the treatment of LBCL. The study showed that in patients with LBCL who had relapsed or refractory disease after first-line chemotherapy, compared with long-term second-line standard care (chemotherapy and consolidation autotransplantation), patients who received a single infusion of Yescarta had a significantly improved prognosis. “

Christi Shaw, CEO of Kate Pharmaceuticals, said: “Yescarta has played an important role in changing the prognosis of third-line LBCL patients. Our goal is always to allow more patients to benefit from CAR-T cell therapy in the early stages of treatment. Patients at this stage may be more likely to benefit. As a leader in the field of cell therapy, Kite is honored to complete this landmark study and thanks patients, families, doctors and nursing teams around the world for making this success may.”

Yescarta (Axicabtagene Ciloleucel, Axi-Cel) is a CD19 CAR-T cell therapy, acquired by Gilead for USD 11.9 billion to acquire Kite. In the United States, Yescarta was approved by the FDA in October 2017 and is the first CAR-T cell therapy for adult patients with relapsed or refractory large B-cell lymphoma (R/R LBLC).