The fourth CAR-T therapy was approved to treat large B-cell lymphoma, with better efficacy and safety.

Large B-cell lymphoma is the most common type of non-Hodgkin’s lymphoma, and Breyanzi is a targeted CAR-T therapy.

Recently, the US FDA announced the approval of the new CAR-T therapy Breyanzi (lisocabtagene maraleucel) for the treatment of certain types of adult patients with large B-cell lymphoma (DLBCL) who have not responded to at least 2 other systemic treatments, or Relapse occurred after treatment.

Breyanzi is a CAR-T cell therapy targeting CD19 antigen, and it is also the fourth CAR-T therapy for specific types of non-Hodgkin’s lymphoma. However, the drug has not been approved to treat patients with primary central nervous system lymphoma.

Large B-cell lymphoma (DLBCL) is the most common type of non-Hodgkin’s lymphoma (NHL), accounting for 40% of B-cell NHL, and China has an estimated 50,000 new cases each year. DLBCL disease progresses rapidly and is highly aggressive. It is characterized by a rapid increase in the number of malignant B cells in lymph nodes, spleen, liver, bone marrow or other organs.

In June and July last year, the FDA approved the selective nuclear export protein inhibitor Xpovio (selinexor) and Monjuvi combination therapy for the treatment of patients with large B-cell lymphoma.

The approval of the new therapy has largely alleviated the dilemma of resistance or ineffectiveness of DLBCL treatment. However, for patients who cannot tolerate strong chemotherapy or are not suitable for autologous stem cell transplantation and CAR-T cell therapy, the prognosis is particularly poor, and more treatment options are still needed.

Breyanzi is an autologous CAR-T therapy targeting CD19 antigen. It consists of prepared and purified CD8+ and CD4+ T cells in a specific ratio (1:1), which facilitates better control of the side effects of cell therapy and improves product safety Sex. 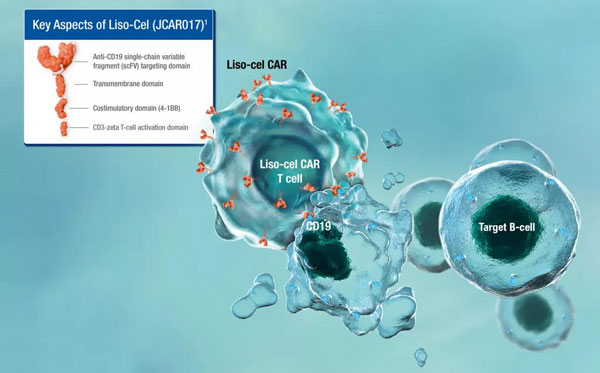 ▌The highest mitigation rate and the best safety! The test data is amazing!

This approval is supported by positive data from a multicenter clinical trial called TRANSCEND NHL 001, which is the largest CD19-targeted CAR-T therapy to date.

The trial enrolled 344 patients with large B-cell lymphoma over 18 years of age who had previously received 2 or more therapies and had undergone leukocyte separation. 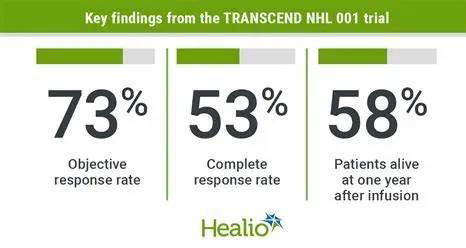 The key is that compared with the approved CAR-T therapy Yescarta, Kymriah trial data, Breyanzi treatment group patients have a higher remission rate and the best safety. During the course of treatment, only 2% (6 cases) of patients developed grade 3/4 cytokine release syndrome (CRS).

This approval provides a new treatment option for patients with certain cancers that affect the blood, bone marrow and lymph nodes, and is also another milestone in the field of cellular immunotherapy!

In August 2017, the US FDA announced that the CAR-T therapy Kymriah was approved for marketing, for the treatment of relapsed or refractory acute lymphoblastic leukemia (ALL) patients under the age of 25. This is the world’s first approved CAR-T therapy.

In May 2018, Kymriah was approved for the second indication for the treatment of adult patients with relapsed or refractory diffuse DLBCL (previously received two or more systemic treatments).

In October 2017, the CAR-T therapy Yescarta was approved by the US FDA for the treatment of adult patients with specific types of large B-cell lymphoma.

Yescarta is the first CAR-T therapy approved by the U.S. FDA for specific non-Hodgkin’s lymphoma and the second approved CAR-T therapy.